"Guangzhou Dream Factory" addresses the contours of these cultural and economic interactions, looking at the push factors for migration and the impact of global capitalism in Africa and China.

To say Guangzhou is bustling would be an understatement. Nearly 14 million people reside and work in this centuries-old trading port that has long been a space for global trade. It is a site that has drawn domestic migrants from across China but also sojourners from many nations of Africa enticed by the prospect of lucrative opportunities. Every month, tens of thousands arrive in this city seeking a new life. The film Guangzhou Dream Factory addresses the contours of these cultural and economic interactions, looking at the push factors for migration and also the impact of global capitalism in Africa and China. I spoke with one of the directors of the film, Christiane Badgley, by phone about this multi-sited film and the upcoming screening at #CAAMFest35.

Guangzhou Dream Factory screens twice at CAAMFest with a newly-added screening on March 15 at the Alamo Drafthouse in SF, and on March 18at the New Parkway Theatre in Oakland (this screening is at rush).

You start this film by talking about how you could not find a locally made knife in the street markets of Ghana because most of the markets were inundated by Chinese products. Was this the “aha” moment when you decided to make this film or was there a combination of experiences well before this that made you think about the China-Africa connection?

Well, the genesis of the film was more complex than one “aha” moment. I have been working on projects in Africa for over twenty-five years.  So I have seen the changes that have resulted from the importation of Chinese goods and in the last decade and have seen more Chinese people coming to Africa. I noticed the change in consumer culture created by the availability of Chinese goods. There are many positives but there are always two sides.

While working at Linked TV in San Francisco with Erica Marcus, we began discussing how we could come together on a project. She had a China background and I had an Africa background. So we began the film with a research grant from the National Endowment for the Humanities. Some of the reflection you hear in the film comes from the time that I spent exploring African development and the challenges facing Africans trying to make their lives better at home.

How do you want viewers to watch this film in the context of the present situation in the US?

I think for us, we’d like certain things to come across in film. We want people to see globalization is affecting everyone around the world. Here in the US, we talk about globalization as if we are only ones affected. “We lost our jobs to China” or whatever the story people tell is so American-centric. We want to show people that modes of production, cheap manufacturing around world, and consumer culture has turned everything, everywhere upside down. Globalization is affecting all of us and we’re all in it together. We want people to see the connections between people. Between Africans and Americans.

And we would like people to see Africans in a different light. In the film you’ll see them as dynamic, resilient, entrepreneurs. They are people trying to find a better life for themselves and their families and weather they go to the US or China or wherever, there’s this strong impulse that’s there and that’s not going to change. We’d like the film to fit into that category that shows that the world is all about movement, migration and mixing and that’s the history of the world. That’s what makes the world interesting and dynamic. That’s what makes economies grow. And it’s the future. And to be in a place now where we’re talking about closing borders and “making America great again” — it’s so not what we need to embrace to move forward and make the world a better place for everyone. 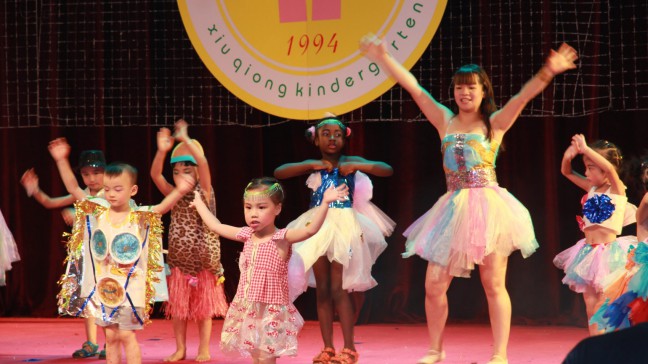 How do the women who marry the African migrants in the marketplaces mediate some of the conflicts that seem to arise with other market owners, like stereotypes about crime and trust raised in the film?

Many of the women who marry African men in Guangzhou are not from there. They are migrants themselves. And sometimes they see these men as being opportunity themselves. Some even started businesses in Africa. Both sides seem to be able to benefit from their relationships. We did talk to some couples who spoke about the challenges to get their families to accept their husbands. And it seemed the more economically successful they were, the easier it could be for acceptance. When we went to Guangzhou over a period of three years, we saw some cultural conflicts — like between those who married too quickly. But in the markets, they do sometimes mediate. And in the markets, there is lot of different levels of what Africans mean and the spouses certainly help negotiate some of the market relationships.

Then there are other “mediators” who may or may not be quite so helpful. There was this one guy from Guangzhou who really stood out — the one who was hired by a Nigerian businessman to help smooth out relations with local Chinese state officials. I was cracking up because he seemed genuinely frustrated and perplexed by the lack of punctuality by his African bosses and possibly other things they might do. In your research, did you find that there was a lack of strong cultural knowledge about the difference between Chinese and various African cultural practices in these business negotiations?

Oh that was Jackie! Yes, it’s pretty common. I think you’ll find that in Africa too. You see people doing business there and not understanding cultural differences and even with people who are hired to mediate. There are lots of misunderstandings. Jackie is still working with Nigerians. He’s been to Nigeria himself. I think once people get a chance to go somewhere and see reality on ground it gives them a bit more understanding of where people are coming from.

How are people circulating stories or warnings about the issues about the trafficking of people and especially of women?

You meet people in Guangzhou who came over without a plan and they were kind of naive and you can say, “Well that’s the chance you take when you don’t plan things out carefully or really understand how difficult things could be when getting to China.” They might loose money and it’s unfortunate. But what’s really awful is the number of people you meet who are tricked into thinking they are going to go somewhere else or tricked in to thinking they are going to get a job in China. They assume China is the factory capital of world and so they are going to get a job in a factory but they don’t know that no foreigners gets factory jobs in China. Lots of East African women get caught up in this scheme.

When you go to Guangzhou, you meet lots of African business women. In many places in Africa, there is strong tradition of female entrepreneurship. So it’s not surprising to see African women who are mobile business owners, running shops or hair salons in China. But you also meet women from Uganda and Kenya who have been caught up in these scams and in sex work. There are some who come over to do sex work and that’s an economic reality but a lot of them didn’t. As far as we are able to tell, in the past, the Chinese state turns a blind eye to this. It’s really happening under the radar and no one really notices it. Many of this work is catered to African men and other foreign business men, not to Chinese men. The traffic is taking place in a parallel economy that is underground. There is little press reporting or coverage on the plights of these women. There are some discussions in online fora and online publications but not in the mainstream media. The scams are run by people within African countries running these operations and they are connected to networks of people from their countries back in China. I’d be interested in covering more of this in the future. Something needs to happen so people can become more aware of these scams and trafficking.

Let’s talk about these mixed Black and Chinese children or the “Chinese Obamas” as they are lovingly called by their parents. Can you speak more about this symbolism of hope that seems to be given to these kids with that nickname?

Yeah, we heard that on many occasions. People all over the world love kids but Nigerians really love kids. They are such an important part of Nigerian culture. And every time we came across these mixed kids, they would proudly announce, “These are the Chinese Obamas! They are the future! They can be presidents too!” These kids are really a new challenge for China. Many of them are not even citizens. We met some who are now working their way through high school in China. Some families move their mixed kids out of China because putting them in international school would be so expensive and you have to be doing really well to do that.

But you know, in Gabon, there’s Jean Ping who is a very prominent politician who ran for president in the last elections there and he is half Chinese and half Gabonese. And although he was born and raised in Gabon, he’s the proof that there are “Chinese Obamas” out there. And you must know this as a Japanese/African American that the world is more complex than the world gets painted and its always wonderful to cover these connections that makes the world a more interesting place.

Mitzi Uehara Carter is a professor of Anthropology and East Asian Studies at Florida International University. Her research focuses on race in transnational militarized spaces. She is currently working on her book about her mother and militarization in Okinawa.