Besides eczema being a real affliction for millions of people, the repeated focus on this character’s health issues seemed to be trying to address deeper issues about respectability and professionalism in the legal profession and the criminal justice system, and even how we view the "other."

The recent series finale of HBO’s The Night Of miniseries—an American version of the BBC’s Criminal Justice—became an unexpectedly South Asian American-centric show with its portrayal of Nasir Khan, played by British Pakistani actor Riz Ahmed, as a young Pakistani American man accused of murdering a young woman he picks up in his father’s cab one night. Another South Asian British actor—Amara Karan, who is British Sri Lankan—plays the role of rookie lawyer Chandra Kapoor, who takes on the case alongside John Turturro’s Jack Stone, a down-and-dirty lawyer with the worst case of eczema ever seen on television.

What begins as what seems like a minor character quirk—Stone having to wear open-toe sandals to allow easy access and to let his scaly red feet breathe—literally becomes one of the main storylines of the eight-episode series. Eczema is a skin condition that causes red, scaly patches and can be exacerbated by stress and allergies. It is not contagious and there is no simple cure. In fact, in many of the episodes of The Night Of, Turturro’s character is chasing down a cure, leading him, at one point, to Chinese medicine. Like the recent Olympic athletes who used cupping to win dozens of Gold Medals, Stone’s experience with Chinese medicine was successful, until his condition came back worse than before. 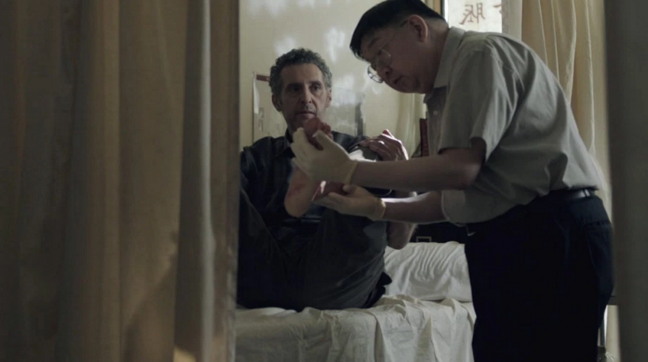 Besides eczema being a real affliction for millions of people, the repeated focus on this character’s health issues seemed to be trying to address deeper issues about respectability and professionalism in the legal profession and the criminal justice system, and even how we view the “other.” Jack Stone was established as a creep, the type of lawyer who hangs around police precincts and has ads on the subway. His divorced wife and teenage son don’t seem to have much respect for him. This is all clear, so why then take us so deeply into his affliction? Unable to quite parse it out myself, I turned to my digital water cooler (Facebook) and asked how others interpreted this part of the show (warning: spoilers ahead!).

“I think it’s the idea of this character who hasn’t reached his potential,” wrote Jessica Ceballos Campbell, a writer and editor with Writ Large Press, based in Los Angeles, “mostly because he’s drowning in anxiety and battling this eczema, which is a manifestation of the anxiety, he is very much his own prisoner. Until the last scene.”

In the final episode, Turturro must step in for Chandra and give the closing statement—a great moment, though many people feel like it was at the expense of Chandra’s character, whose career seemed to have been destroyed for actions that did not seem in line with what we had seen of her for the majority of the show. His eczema comes back full blast the night before he has to present to the jury.

It turns out that BBC’s Peter Moffatt has eczema and thus wrote it into the script of Criminal Justice. But The Night Of takes the eczema to a whole other level.

Ninth grade English teacher Ami Sheth thought that the focus on the eczema was a manifestation of how people treat those of other races.

“I thought it was about the people we don’t want to see and the people we don’t want to touch in society, whether it’s Muslims, the disabled, the deformed, the weak, etc.,” she wrote. “The anxiety of the other is physically manifested here and viscerally felt by the people around him and later on the people around Naz. I found his eczema to be beyond repulsive. I’m not exaggerating when I say I actually gagged at one point. But what occurred to me later is that this is how people feel about other ‘races’ and people who pray to other gods, people who love the wrong person.”

Sheba Karim, author of Skunk Girl—a YA novel about a Pakistani American girl—concurred with the show’s over-the-top, gross-out portrayal of eczema, and thought it had to do with complicating the storyline. There is a moment, when Stone’s condition completely clears up.

“When his eczema was cured, it signaled that maybe there could be happy endings, and its return was a reminder that it’s never so simple,” Karim said.

I agreed with these ideas and they made me think that in a way, Jack Stone was like a modern day leper and that he got this “leprosy”—which really was a long-term bacterial infection of the skin that can cause fingers to fall off—from his work in the trenches of the criminal justice system. For many years, those afflicted by leprosy were put into leper colonies because of the wrongful idea that it was highly contagious, thus being shunned from society—but really those living in conditions of poverty were prone to the disease which could be treated. There were could be many parallels between the way lepers were treated and how we isolate and condemn those accused of crimes. The show, using make-up, made the eczema look especially gross, turning it into an exaggerated plot point.

Animator Adnan Hussain felt like Stone’s skin condition added more tension to his storyline, and made him even more unlikable. “It really stacked the cards against him,” Hussain said, like the criminal justice system itself.

Hussain felt like this was another great move in a show that gives us complicated, fully-rounded characters.

“Naz starts off as a seemingly meek kid, but we learn that he is far more than that, not just after his arrest, but before,” he wrote.

In the show, we learn that Naz’s character had to deal with major bullying as a Muslim kid in New York City after 9/11 and didn’t take it lying down.

“To see a story with a Muslim lead that is actually a story about a regular person was very refreshing,” Hussain, who is Muslim American, wrote. “I really felt like he was a character who had gotten himself into this situation, and the Muslim culture and background were just parts of who he was, rather than shorthand for a list of incomplete ideas based on assumptions about an entire group.”

Prem Kumta, a San Francisco-based marketing professional, thought that the eczema storyline was one of the best parts of The Night Of: “You’re lead down a path to hate this shitty attorney who preys on criminals still in holding. At first the eczema is what he deserves for that choice, then you see the human side to that pain and how it affects how his kids sees him. It’s a metaphor representing the bullshit all of us have to deal with in life.”

One of the most humane moments in the show is when Stone adopts the murder victim’s cat, even though he is severely allergic and it exacerbates his condition. He isolates it in one room in his apartment, and goes through extreme measures to make sure he doesn’t touch it. Then, at a low point, he returns the cat the pound, even though he knows that means the cat’s ultimate death. But the show’s very last scene—and one of the most optimistic moments—we see that he’s brought the cat back home.

“The eczema is a physical embodiment of all the stress we deal with that further complicates our lives, but in the end, you live with it and can accept and be happy with it, like with the cat! The cat just makes [his eczema] worse, but you fucking love THAT CAT!”

–Neelanjana Banerjee is a writer and editor based in Los Angeles.