Now accepting applications for summer workshops in Philadelphia and Minneapolis. 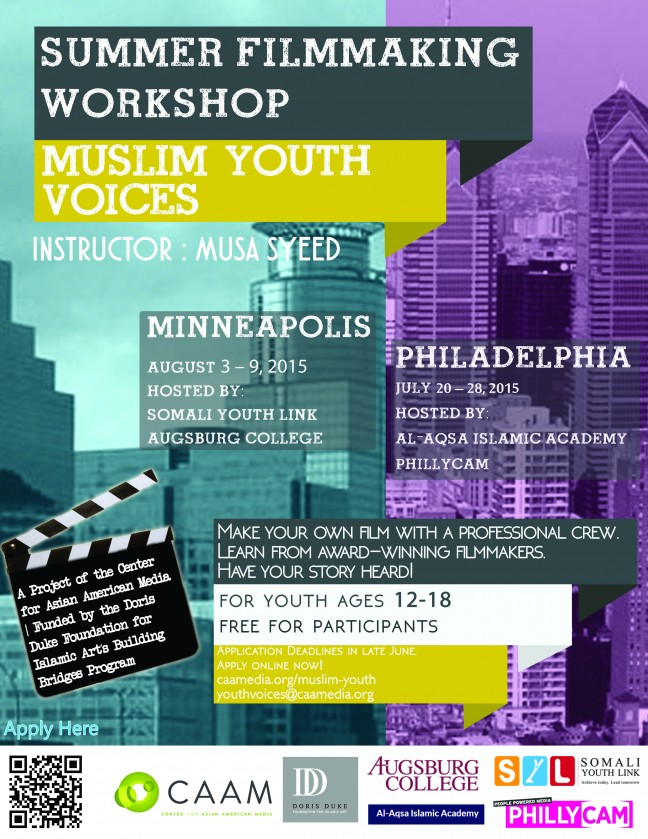 Muslim Youth Voices Project is now accepting applications for two summer workshops in Philadelphia, PA and Minneapolis, MN. Muslim Youth Voices Project is a national initiative of the Center for Asian American Media. Last year’s workshops took place in New York and Fremont, CA. Through this three-year initiative, CAAM hopes to amplify young people’s expression and celebration of Muslim cultures by giving them the essential tools to tell their stories and the stories of their communities — stories often invisible to the national public.

The project includes 7 days of filmmaking workshops and will take place in six cities across the country. Developed and led by experienced film professionals from the Muslim community, this workshop provides a safe, sensitive space for self-expression and exploration. Through weeklong intensives, students will gain an in-depth appreciation of storytelling and have the opportunity to create their own short films with the help of a professional crew. The Muslim Youth Voices Project is made possible by a grant from the Doris Duke Foundation for Islamic Art’s Building Bridges Program.

Muslim youth ages 12 to 18, from all religious and ethnic backgrounds, are eligible to apply for this free program.

Lead Instructor Musa Syeed
Musa Syeed’s first feature film, VALLEY OF SAINTS, won the 2012 Audience Award at the Sundance Film Festival. He has taught film for Williams College and the Tribeca Film Institute. Syeed was a Fulbright Fellow in Egypt and is an alumnus of the Tisch School of the Arts and the Middle Eastern & Islamic Studies Department at New York University.

We are now accepting applications for summer workshops.