Our favorite interviews from 2014 include John Cho, Grace Lee, Maggie Q and the young filmmakers from our Muslim Youth Voices Project.

Well, it’s nearing the (Gregorian) New Year. Time to say goodbye to 2014. And time for yearend listicles! In 2014 we interviewed celebrities, young people, independent filmmakers, journalists, and more. Here are our top 14 from 2014:

Yes, we heard a lot of hype around John Cho and his groundbreaking role as the lead male on Selfie. We think it’s well-deserved. The Korean American actor has paid his dues as an actor, he’s easy on the eyes, and talented to boot. From independent Asian American films to being a star, we’ve followed his career for years. The man gives a thoughtful interview. Also check out this fabulous John Cho career timeline.

The journalist who hosts NPR’s Latino USA hit the public TV airwaves again in 2014 with her new docu-series, America By The Numbers (which CAAM helped fund). The series took a hard, and heart-felt, look at the changing demographics in America. Always delving into issues with passion, Hinojosa helped us see a side of race in America that we’ve never seen before.

Teen actor Ryan Potter is perhaps most well-known for his role on Supah Ninjas. He’s also the voice behind “Hiro” in the Disney animated blockbuster, Big Hero 6. Potter is humble, and we find out he wants to go to film school. He’s passionate about social justice causes, including helping the homeless and speaking out against bullying. We can’t wait to see what he does next.

She’s been a working actress since age 14. Chen is the lead contest judge of the 1990 Institute’s newest education initiative, Youth Voices on China (YVOC), a national video contest that asks American students in middle school through college to create videos with the theme “What’s China? Why Understanding China Is Important to My Future.” CAAM is partnering with Youth Voices on China and will be screening the winning films at CAAMFest in March 2015. Here, she talks about her career and independent Asian American cinema.

In one of the hottest celebrity interviews, the pair, who both starred in Divergent, talk about typecasting in Hollywood. They don’t seem to hold anything back in their critiques about roles they receive, giving us a rare insiders’ peek into the world of actors of color. 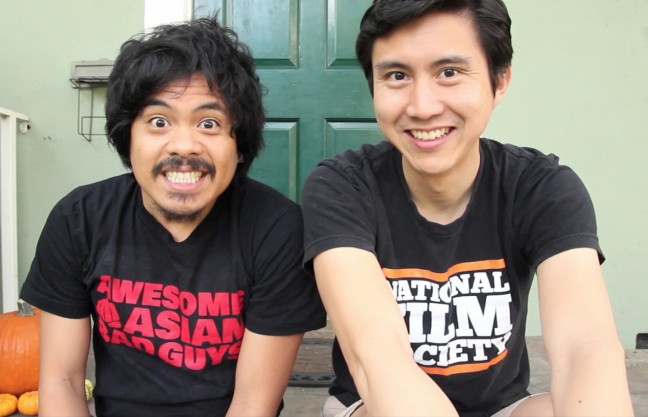 Listen to the team behind the Awesome Asian Bad Guys film, which world premiered at CAAMFest 2014 to a sold-out crowd at the Oakland Museum. Patrick Epino and Stephen Dypiangco (also of National Film Society) talk about their project with actor Dante Basco.

Once a subject in a Spencer Nakasako documentary film, Mike Siv received a MacArthur Grant to make his own film about the Khmer Rouge trials and what justice and reconciliation look like after decades of silence and trauma. Siv talks about the forthcoming documentary in this interview.

CAAM’s Memories to Light: Asian American Home Movies project takes home movies to the next level. In this interview with Gavin Tachibana, we see the impact that home movies can have on our own memories of childhood and family. Together with other families’ stories, the collection provides an Asian American narrative that is often not seen or heard anywhere else.

We see why Arden Cho is a fan favorite. She’s sweet, fierce and thoughtful. She stars in MTV’s Teen Wolf as Kira, the Japanese/Korean American Kitsune, a fox spirit of Japanese mythology. On screen, she kicks butt. Off screen, she talks about battling racism as a young girl and her ideal role in a movie.

Meet some of the young adults from CAAM’s Muslim Youth Voices Project. From Fremont, CA to New York City, Muslim American teenagers came together for an intensive filmmaking workshop with award-winning filmmaker Musa Syeed. The teens brought their own creativity to the fore, and we can’t wait to show you their finished projects.

Filmmaker Grace Lee made American Revolutionary: The Evolution of Grace Lee Boggs, which debuted nationally this summer on PBS. One of CAAM’s Media Fund projects, the documentary takes a look at the life of 99 year-old Detroit-based activist and philosopher Grace Lee Boggs. Told with both humor and honesty, the documentary will show the lasting impact of one Chinese American woman who lived through all the major social movements of the last century.

Konrad Ng leads the Smithsonian Asian Pacific American Center (and is a former CAAM board member). Here, he chats with us about “Young Historians, Living Histories,” a collaborative project between the Smithsonian Asian Pacific American Center, Smithsonian Affiliations, and CAAM. The project included teens from across the country and many of them flew out to CAAMFest 2014 to see their work displayed on the big screen—an exciting time for the youth and all of us at CAAM.

Corinne Manabat and Brian Redondo put together compelling vignettes of life as an undocumented Asian Pacific American. Their short film, Why We Rise, played at CAAMFest 2014 and received the Loni Ding Award for Social Issues Documentary at the festival. It went on to be selected as part of the PBS Online Film Festival in 2014.

The award-winning journalist shares about facing discrimination early in her career, working with Oprah and Barbara Walters, and receiving encouragement from Connie Chung, who she’d never met before. Ling currently has her own show on CNN, This is Life with Lisa Ling.