"Winning Girl" premieres on TV Tuesday, May 12 on World Channel.

UPDATE: Winning Girl will be available on Comcast’s XFINITY/X1 throughout the month of April, 2018.

This interview below was originally published on May 7, 2015.

Hawaii-based director Kimberlee Bassford talks with CAAM about her latest documentary, Winning Girl, about a young girl’s dreams to win the wrestling and judo world championships. The film follows Teshya Alo from when she is 12-16, capturing not only her lively competitions but her tight-knit family and a young girl’s coming of age. The documentary recently took home the Special Jury Award for Documentary Feature at the Los Angeles Asian Pacific Film Festival.

The film is unique in that the main character is a young girl, who can serve as an inspiration for all ages and backgrounds. But Bassford says she made the film with a particular audience in mind: young girls who may have a hard time seeing themselves reflected in films. Bassford has been a filmmaker for the past 12 years. Her first feature documentary was Patsy Mink: Ahead of the Majority, which was in part funded by CAAM.

Winning Girl makes its national broadcast premiere on the World Channel as a part of America ReFramed documentary series on Tuesday, May 12 at 8pm ET. Check local listings. World Channel will also be streaming the film online starting May 13, 2015 until August 7, 2015 and the film is available for educational distribution.

I was wondering for Winning Girl if you had a favorite moment from making the film or working with Teshya and her family?
I mean there was just a lot of great moments. I guess that it was really exciting to be at her first international tournament, which is in the film, when she went to compete at in the Pan American Judo Championship at the age of 12. That was just a really great moment to see—it was a very victorious moment for her at the end of the tournament when she basically flipped her competition. She had three matches and she won all three hands down.

A sentiment in the film is she has a losses and victories. Not that that I was happy to show losses but I think that’s what people can take away from the film, is the resilience that she has, that it wasn’t all just wins. She says something after her losses which kind of always touches me. Whenever she loses she doesn’t think about quitting or giving, she just thinks about how much better she can make herself for the next time that she goes up against that same competitor. And so I just love this idea of continuous improvement, which is something I know that people who are successful in all fields kind of share that idea, that you kind of roll with your losses, the idea that you can always improve yourself, and that you can you should never give up, you should always just learn from our mistakes. So that’s something that I admire in her. Even though she’s just a teenager, it’s like the secret to her success. That’s something that people of all ages will take away from the film, is that idea of continuous improvement no matter what you do, no matter how high you achieve, you can always do better. 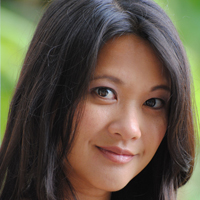 So when you started making this film did you a set audience in mind of like maybe young girls or parents? It is a very family-friendly film, like young children could watch it and be inspired by it?
Yeah. It is definitely. I mean I always wanted the film to reach a general audience for sure, but my target audience was young girls. And I mean just youth in general, but particularly girls because there are very few stories that feature a young girl that you might see on a documentary or on television.

So you have the screening before, in Hawai’i, CAAMFest 2015, Los Angeles Asian Pacific Film Festival—what were some of the audience reactions you’ve either from adults or children?
I don’t think there have been that many kids in the film festival screenings unfortunately, but I am planning to do an outreach program at least here on Oahu with schools—I’m working on that right now, with schools and also just youth groups, so hopefully it’ll be able to reach children. But parents in particular and adults who have also seen it, they’ve been very enthusiastic in that really enjoy the film, basically. A lot of people have talked about how impressed they were—obviously, with Teshya, but also with her whole family. It’s a whole family effort in how much they really back their daughter in her dreams. So that’s something we purposely try to you know bring out through the editing. And of course I’m glad that’s what people get from the film, it’s not just the individual but it’s really the family. It’s kind of cultural. She is part-Polynesian, and she has Hawaiian and Samoan, and family is very central, as it is in many cultures. You know, the fact that they do travel all together as a family is pretty unique. I mean a lot of parents you know have teenagers who are elite athletes and just send their kids and their coaches to travel. Partly it’s because it’s hard to afford it. They just make it work, it’s just a priority, and partly I think it’s kind of for safety—they want to make sure she’s okay.

Are you working on any other documentaries or any other projects right now?
Yeah, so I’m still wrapping up Winning Girl. I still have the broadcast and am trying to do the outreach programs. I’ve also begun working on a new documentary about the life and death of the late Chinese American author and historian Iris Chang.