Find out ways to challenge kids with math without shaming them with Prof. Angela Vierling-Claassen. Plus, her favorite math apps.

CAAM spoke with Math Professor Angela Vierling-Claassen, who served as the math advisor on 20 PBS LearningMedia middle school math videos produced by CAAM. Vierling-Claassen is a math professor at Lesley University in Cambridge, Massachusetts and blogs here. We asked her about her favorite videos, how she dealt with timed tests with her 3rd grade daughter, and what math shaming is. Vierling-Claassen also shares her favorite math apps.

CAAM produced these videos in collaboration with the National Minority Consortia that include diverse voices such as ukulele virtuoso Jake Shimabukuro, graffiti artist Scape Martinez, and young women who participate in escaramuza, a Mexican equestrian event. Check out the entire group of videos here—all are aligned with Common Core Standards.

Tell me about your role in the project.
My role really varied, depending on what it was that we were working on. I did everything from actually drafting an initial idea of the video before passing it off to somebody else to flesh out a script, to simply bouncing around ideas with [Kar Yin Tham, CAAM’s director of education initiatives] on what we might do with material that we have or what we’re filming. I feel like I did it all from soup to nuts. I worked on most of the videos.

Which ones are your favorites?
I realy like the ones that we did of Jake Shimabukuro just because I loved getting go know more about him. I think I’d seen his viral YouTube video. But that’s the only thing I’d seen. So the first thing I did was watch the documentary that CAAM produced [Jake Shimabukuro: Life on Four Strings]. And then to be able to think, ah, how can we do math around this? 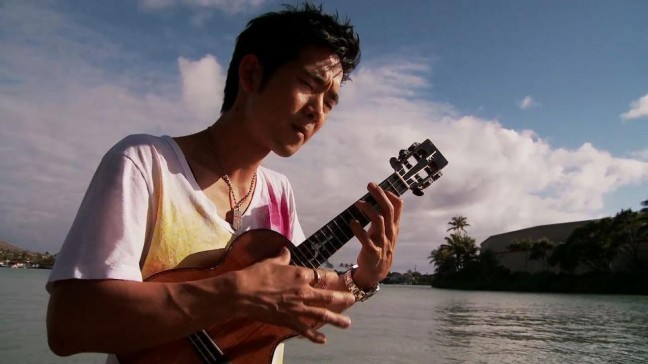 Another one I liked—the one we did with the horse riding—escaramuza. I new nothing about it before. So I got to learn about this thing in the world that was new to me, and then to try to put my mind to—so we, have this great thing, these women and young girls—how can we find a little emath that we can talk about. One of the things I really liked—pretty much anywhere we looked, we could find some math we could feature. I’m pretty convinced that there’s interesting math no matter where it is that you might look.

How do you think the videos play a role in learning math?
I hope that the videos that we did will be able to show kids that there is math in real life situations, that you can go from something that interests you in the world to mathematics. And that mathematics isn’t simply an activity that happens in the classroom. We’ve done a good job featuring a diversity of voices in that. I think it’s really important that all students—no matter what their race, cultural identity or gender—can see a way that they can both relate to something that they can feel is exciting and that they can relate to as something mathematically too.

I know you do a lot of work around math shaming. Can you explain that?
One thing that we do with math is we don’t think about mathematics as involving emotions. And I think the trouble is, that we’re people. We necessarily have a lot of different emotions all the time, and that includes when we do math and science. We’ve got emotions of pride and fear that we won’t do a good job.

Shame is not oftened talked about emotion. It’s sort of a foundational emotion for us as humans. Lots of young people and adults have experiences where they hold some shame around education. In particular, people can be vulnerable to having shaming experiences or shameful emotions around mathematical work that stand in their way in being able to use mathematics in their lives or to feel like they’re successful in school. One thing that’s really important to me is to help people see that they can, sort of, recover from that. You can get to feel more friendly with math and other people who do math. If someone feels like they’re disrespected in a math class or feel unable to be successful repeatedly—then you’re at risk for feeling ashamed. For a lot of students, it happens with timed tests. There’s kind of only so many times you can take that before you start to believe, maybe I’m not as good as other people.

How do you get someone who hates math or thinks they are bad at it to like it?
The first thing is to find a relationship with the person. To make sure that I have a really strong relationship with the student. I teach a lot of adult students too. Then we can weather some of the difficulties when we try to enage in math together. I get adult students who are trying to compelete undergraduate degrees. I find that the relationships and connections are really the key. Then the person I’m working with will find it easier to do the struggling. People have to be willing to fail. Kids love problems, even hard ones. If you look at a baby to learning to eat, to self-feed cereal. Sometimes they get frustrated, but they’ll usually just keep doing it. But it gets harder when you’re older—it feels like more people are judging you.

My own daughter [a 3rd grader in Massachusetts] was struggling—they were doing timed tests—which I sort of disagree with, timed tests, in general. But I wanted to support her in doing them, versus saying I don’t think we should do timed tests in general.

We practiced at home. I would tell her anytime she got over the time limit, I would give her a piece of candy. So I was basically rewarding her for taking a long time. She could tell I was okay with however she did. I was potentially rewarding her for taking a longer time but she actually started to do shorter and shorter times. I told her if she took over a minute—the limit at school—I would take her out for ice cream. It just let things be a little bit freer. I have her a way to navigate the challenge in a way that she was maybe be frustrated, but she could still hang in there.

For each person, how you do that is different. It depends on what people find motivating. If kids can connect to the adults around them, and believe that the adults around them are thinking the best of them, even if they are failing over and over again, I think you’re probably in a good place. Testing is, for most kids, is going to be a part of their lives. So we have to find a way to bear that and say, “Ah, we’re okay. Everything’s still alright.” For my mind, its being sure you have solid relationships and connections are ways to see yourself through the struggling.

Even though she’s feeling anxious, she’s still safe. And it’s not easy. I guess there’s a weight of it that should be distributed everywhere. Teachers should make their student feel safe, and parents need to help work as hard as they can, and that they’re still good and worthwhile even if they don’t do as good on exams as they hope.

Marble Math and Marble Math Junior are iPad/iPhone apps that have kids engaging in a variety of math challenges while navigating a marble through a maze. The game is fairly engaging for kids, progresses through levels of difficulty, and parents can control the math concepts kids are addressing. (Fee)

Math Playground is a website and series of iPad apps that helps students with mathematics like word problems, logic puzzles, division, and beginning algebra. (Free)

Tynker offers free resources on the iPad or web that help students learn programming as well as full courses for a fee for young people.

Fetch! Lunch Rush is a game for the iPhone (you also have to print some pieces to play) that teaches elementary math skills and gets kids moving. (Free)

Figure This! is a website featuring challenges designed for families to work on and discuss together. The problems have a variety of entry points and extensions. (Free)

5 Dice is a game that helps students learn order of operations and explore using all four operations. (Free)

Dragon Box is an excellent multiplatform game that supports algebra learning. There is also a version for K-5 and an “Elements” game for geometry. (Fee)

Illuminations is a series of online games and apps that covers a wide variety of mathematical concepts. (Free)

High School and Beyond

Desmos is a beautiful free graphing program available on the web and other platforms. (Free)

WoframAlpha does algebra, calculus, and beyond, and has an amazing computation and data engine. It is available for free, but much functionality requires a fee. Available both on the web and as an app. (Free/Fee)

Main image: What do soul food and math have in common? Learn about portion size and nutrition through Byron’s Hurt’s Soul Food Junkies.