Kim Sunée moves with a lithe grace around her book party, offering dishes made from the recipes inside her 2014 cookbook, A Mouthful of Stars, making sure everyone has eaten—the perfect Korean hostess. In Korea, an older person will often ask a younger person, “Have you eaten?” instead of “How are you?” Sunée takes me aside to talk while she barbecues peaches wrapped in prosciutto, one of the recipes in her cookbook. I am wondering why Korean adoptees seem highly represented in the arts, in professions like cooking, and writing.

Charming strangers is Sunée’s regular beat. Sunee was adopted at age 3 or 4—she doesn’t have birth records—by a family in New Orleans. She relates cooking to adoption with particular insight: “People love you when you’re cooking for them . . . I think, as adoptees, we do learn early on to figure out, how do I make this person happy, rather than, how do I make myself happy. And often, perhaps, the reason for that is: if I make this person happy, this person will keep me.”

This sentiment has also been addressed by celebrity Korean adoptee chef Kristen Kish, a winner of Bravo’s Top Chef competition. A Boston Globe profile describes Kish’s adoption as “one factor—although not the only one—in her desire to please others, rather than focus on her own happiness. That would come later, through cooking.”

Kish seems to have moved from others’ happiness to her own happiness. I must admit I have wondered if the relationship between pleasing others and pleasing oneself has something to do with art and adoption.

Kish is maybe the most visible of a growing group of high-profile Korean adoptee chefs. In 2012, she won Top Chef with a startling comeback after being kicked off. In one emotional moment, she mentioned wanting to use the prize money to travel to Korea for the first time since her adoption. Kish was an extremely popular contestant, and her eventual victory, perhaps, drew more attention to her adoptee peers, including Marja Vongerichten, host of PBS’s Kimchi Chronicles, Danny Bowien of Mission Chinese, Alex Pilas, Executive Chef of Mario Batalli’s Eataly, Eric Ehler of Seoul Patch, and others.

This list doesn’t necessarily mean there is a rising tide of Korean adoptee chefs, but it does raise the question. My own brother is a Korean adoptee cook. Korean adoption hit its peak in America in the 1970s and 1980s, which means that many Korean adoptees are currently reaching career heights. With the growing interest in Asian and fusion food, perhaps Korean adoptees are well-positioned in the new American food scene. Or perhaps it’s something else that draws them to cooking. “Hunger is a metaphor for many things we lack or miss,” Sunée says. Perhaps that lack is reflected in a need to create, or connect.

“If somebody gives you up for adoption, it means (a) they can’t care for you or (b) they don’t want you,” Kish told the The Boston Globe. “Either way, you’re missing a piece of something.” Kish credits her adoptive parents with introducing her to Korean culture from a young age. In an interview for KoreAm Journal, she mentions a kimchi festival she attended as a child—though her mother didn’t like kimchi, Kish took to it immediately. She loves to eat Korean fried chicken, japchae, bibimbap. 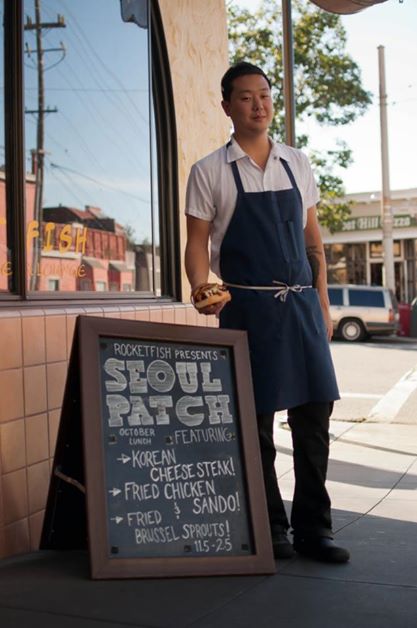 Ehler started out cooking “Americanized Korean food” in his Bay Area pop-up restaurant, Seoul Patch, and then the menu “just kind of turned full-fledge Korean.” Ehler was adopted sometime around age 1—his birth records are not exact. He grew up in small town in Iowa. He began cooking from a very young age, 5 or 6. He is a self-taught chef who would learn from late night infomercials for various cooking products. As a boy, he would read cookbooks and cooking magazines for fun. Shifting from cooking American to Korean food felt right. “I love cooking over fire. I love pickling. It makes sense. It’s not like I eat [Korean food] all the time, but it definitely feels super natural to cook.”

Growing up in Iowa with few other Asians, Ehler was proud of his difference. His mother would make trips into the city to get ingredients for him to cook with—“Asian ingredients.” “Everyone in my community saw me as the Korean kid. They didn’t see me as the adopted kid, for better or worse. Some people were racist or whatever. But for the most part, I was always known as being the Asian kid.”

The first time he ate a Korean meal, around age 11, is a memory still so vivid “that I can look back on it and I understand how important that moment was.” On the other hand, it didn’t feel so important at the time. It took him until he went to Korea to feel the influence of his birth country’s cuisine. Ehler even says that the food helped him to learn the language. “Learning all the menu items, and having to say them properly and order them, and being able to point them out . . . really helped me when it came to learning the [Korean] alphabet.”

Ehler nearly echoes Sunée’s writing when he talks about food as a “way to get in with the locals.” Food connects people, and for adoptees, that can mean connecting them with the people and culture of their birth country. Ehler, a skateboarder, appreciates wordless communication. Cooking someone’s perfect meal seems almost like a form of empathy. What Ehler loves most about his job is “that moment when someone is like . . . this tastes like home.” That, he says, is the best feeling in the world.

“For a while,” he says, cooking “was like me trying to find myself or whatever, but now it’s like, I found myself, I’m comfortable, so let’s use my talent to make other people happy.”

It isn’t necessarily through the food of one’s birth land, though, that an adoptee chef connects with his roots. Sometimes the act of cooking itself is a way home, a way to both one’s birth home and one’s adoptive home.

Chef Alex Pilas of Eataly specializes in Italian food. He doesn’t cook Korean food. But he was adopted at an age where he was old enough to hold onto his memories of Korea—and of the family restaurant in Seoul. He remembers his father cooking and his mother managing. When he boils a chicken, now, he remembers the last meal his extended family ate together to send him and his brother off to America. When he eats roasted seaweed, he remembers his mother roasting seaweed for their large Korean breakfasts.

Pilas’ main cooking influence, though, was his Italian American adoptive grandmother. Italy is the country he visits to learn about his art. When he thinks about the stories food tells, he says, he thinks about “whether people in Italy were eating [a certain dish] in the best of times or in the worst of times.” He tells me a story about an impoverished time in Verona when the locals resorted to eating horse. Pilas considers himself “a food historian,” and his trips to Italy land at the intersection between culture and cuisine.

In either case, whether he is remembering his father making noodles or his grandmother making noodles, cooking is a way into the past. Pilas is most comfortable when he is in the kitchen; there, he feels he “has a place.” It may be telling that when he eats for comfort, his choice is roasted chicken or pasta, and that he sees the connection between Korean food and Italian food in his predilection for acids and spices in his recipes.

Sunée, like many Korean adoptees who didn’t necessarily grow up eating Korean food, grew up eating the local cuisine; her adoptive grandfather became her major food influence, a man who would make real crawfish bisque, a laborious process that has mostly gone out of practice. Included in A Mouthful of Stars are recipes both for traditional Korean dishes such as “Pork Belly Korean-Style BBQ,” or “Samgaetong,” and for New Orleans-inspired dishes like her “Scrape the Bottom Jambalaya” and “Down and Dirty Rice.”

For all the adopted chefs I spoke with, there was a longing for the tastes of their homeland. Sunée describes missing the cuisine without even knowing what it was. “My heart, my body, my taste buds remember Korean food,” she writes. Sunée, like Ehler, returned to Korea as an adult. Eating her way through Seoul “as if through tasting certain flavors, I could possibly remember faces, people, and a home.” This line brings to mind my own experience returning to Korea as an adoptee and believing I would recall even the language by smelling the air, touching the ground, or tasting the food.

My brother, Daniel Salesses, started on the restaurant track, attending culinary school at Johnson and Wales. He was adopted as a baby from a different Korean city and family than I. He went to chef school with an interest in Asian cuisine, but stayed away from it out of embarrassment. He felt as if he was “supposed to know it already.” Not until his last couple of years at school did he make the kind of shift Ehler described—and then he began cooking Korean food because he made Korean friends and wanted to “show them that [he] was Korean.”

For my brother, his interest in food was at first a way of differentiating himself from our adoptive family. He was influenced by the tastes of a friend, “the one kid who wouldn’t eat McDonald’s.” Our family was not opposed to fast food.

I get the feeling, however, that my brother was trying to differentiate more than just his taste. As a boy, my brother tried to escape the adoption label. He would have rather had people see him as Korean than as adopted. For transracial adoptees, whenever one is around one’s adoptive family, one’s adoption is what other people see first. On some level, my brother was probably trying to separate himself from the idea that our adoptive family would be responsible for his tastes.

What my brother says has kept him cooking all these years has been “seeing how cooking with other people or cooking for other people creates a connection.” He is now in Korea, running private lessons to teach native Koreans how to prepare French cuisine.

I know this longing for connection in my writing. At first, my brother wanted to find recognition as a chef, but soon, connecting with other people started to matter more. That’s one main reason he left the restaurant track to teach: he says he cooks now in order to share his experiences with other people, to pass his experiences down. Maybe what matters most to these adoptee cooks, in the end, are the connections they make with their art.

Matthew Salesses was adopted from Korea at age two. He has written about adoption, race, and parenting for NPR Code Switch, The New York Times Motherlode blog, Salon, Hyphen, and often for The Good Men Project, where he is the Fiction Editor. He is the author of several books, including I’m Not Saying, I’m Just Saying and Different Racisms: On Stereotypes, the Individual, and Asian American Masculinity. His novel, The Hundred-Year Flood, is forthcoming from Little A/Amazon in 2015.