The month of May is Asian Pacific American Heritage Month and CAAM has some great things going on to celebrate!

Throughout May, CAAM will also be bringing you a series of films that will be broadcast on a PBS station near you*! We’re proud to present Among B-Boys (May 13) by Christopher Woon, Anna May Wong: In Her Own Words by Yunah Hong (watch online through 5/30/13), Jake Shimabukuro: Life on Four Strings (watch online through 8/8/13) by Tadashi Nakamura & Seeking Asian Female (watch online through 6/2/13) by Debbie Lum.
(*For correct times of programs, please check local listings)

Bay Area! On Saturday, May 18 from 2-4 p.m., CAAM will be presenting the 3rd Annual AHSC Cinema Showcase, a FREE event at the Asian Art Museum taking place during the Asian Heritage Street Celebration. We will be celebrating local Asian American media and media makers through a showing of music videos and short films, some of which include official selections of CAAMFest 2013.

May 1st, 3PM EST: Check out the AAPI Heritage Month Google Hangout, a partnership between the Smithsonian Asian Pacific American Center and the White House Initiative on Asian Americans and Pacific Islanders. 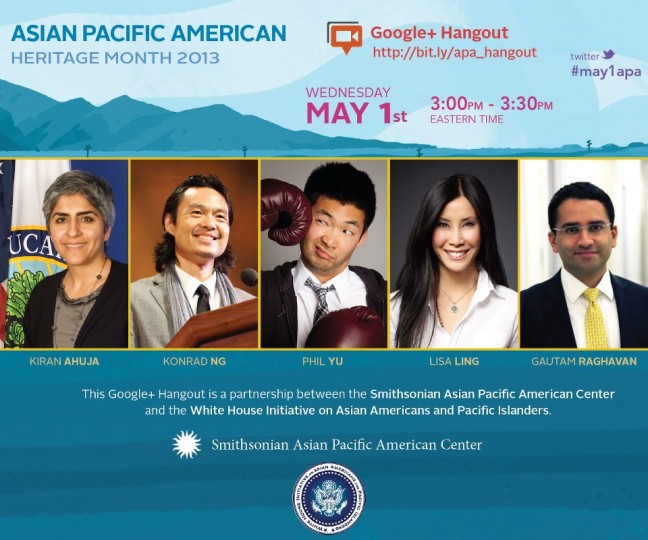 It’s going to be a film-filled APA Heritage Month so we hope you join us!

How else will you be celebrating APA Heritage Month? Let us know in the comments below.