By SFIAAFF Director Chi-hui Yang The annual Robert Flaherty Film Seminar has for decades been one of the world’s most important and vital places to explore contemporary documentary and experimental cinema, and its 2009 edition offered no evidence to dispute this. 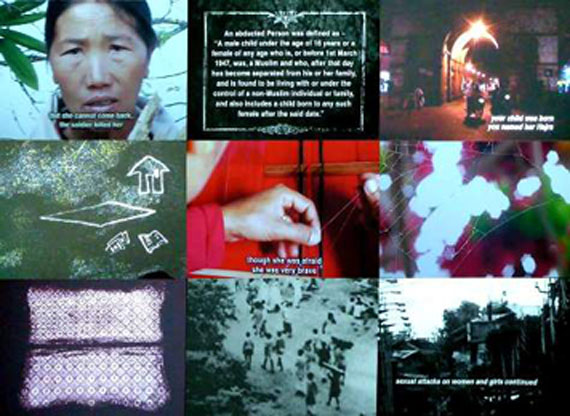 Image from “The Lightning Testimonies” by Amar Kanwar.

The annual Robert Flaherty Film Seminar has for decades been one of the world’s most important and vital places to explore contemporary documentary and experimental cinema, and its 2009 edition offered no evidence to dispute this. There is nothing quite like it; a week-long film festival/film summer camp immersion with filmmakers and attendees from around the world, gathered with one purpose in mind: to talk and see film.

This year’s seminar took place June 21-26 at Colgate College in upstate New York, and was programmed by former San Francisco Cinematheque Program Director Irina Leimbacher. In the Flaherty’s tradition, none of the filmmakers or films were announced in advance; the 150 attendees (critics, academics, filmmakers, curators) came together with only Leimbacher’s theme as a starting point: Monuments, Witnesses, Ruins.

Three times a day, for six days, attendees entered a dark theatre and collectively took in a range of works–mysteries until the images appeared on screen. They included political allegories, personal documentaries, video installations, and documentary/fiction hybrid works. Each screening was followed by lengthy discussions.

The assembled program focused heavily on the Middle East and Russia, while also bringing filmmakers from the U.S., Colombia, India, Mauritania and other points on the globe. A current which ran through all of the films was an exploration of how the individual and the artist respond to and articulate experiences of conflict, trauma, and history. Amidst monuments and ruins–both physical and psychological–of contemporary world history (remnants of globalization, civil war, environmental change), who are witnesses to these dynamics, and how are their testimonies recorded? In a broader sense, how is history written, and by whom?

Palestinian filmmaker Kamal Aljafari’s works pushed these inquiries toward the essayistic and family portraiture while exploring Palestine’s troubled recent past. His documentary THE ROOF probed memory, trauma, and space through an exploration of his family’s unfinished home since their resettlement in 1948, while the fiction/documentary hybrid PORT OF MEMORY (screened as a work-in-progress) scripted his uncle playing himself amidst the ruins of the city of Jaffa, whose ownership is contested by Israel and Palestine.

Russian filmmaker Pavel Medvedev offered some of the most gorgeously constructed films of the week, documentaries which dug deep into the soul of Russian history and society, building linkages between national histories, personal lives, and living traditions. His stunning ON THE THIRD PLANET FROM THE SUN examines a rough Northern Russian landscape, and the lives of its inhabitants, who make their living collecting scraps of space exploration metal debris, while at the same time living on the site of a former H-bomb testing ground.

Perhaps most striking was Indian filmmaker Amar Kanwar’s multi-channel video installation, THE LIGHTNING TESTIMONIES. An immersive exploration of the Indian nation, sexual violence and religious, ethnic, and civil conflict, TESTIMONIES is a powerful 32-minute loop, composed of eight synchronized projections. Each channel offers a narrative of history and trauma through gorgeously photographed, abstract, poetic imagery: faces, maps, nature, news reportage–scenes from everyday life. The cumulative effect of all eight screens, which can never be all seen at once, is a visualization of something perhaps impossible to capture fully, a national history.

The 2010 Flaherty Seminar will be programmed by film critic (and past SFIAAFF jury member) Dennis Lim, whose works can be read in The New York Times, Cinemascope, and Moving Image Source.