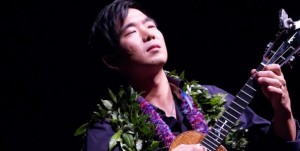 CAAM’s Director of Programs Don Young attended the festival too! He shared his experience with Filmmaker Magazine:

For Jake (an Oahu native), and for many of the crew, the HIFF screening represented a homecoming. “Many times, Jake let us know being able to screen the film in his hometown meant everything to him,” said the film’s executive producer, Don Young. “He had over 80 family members there alone, so it was a very special evening that he’s been looking forward to since we started the project. For the team, it was so important for us to present the film to the community where Jake’s story began.”

Patrolling the balcony before the show and performing a few songs afterwards, Shimabukuro certainly left little doubt that the documentary’s “screen persona” was true to life, radiating schoolboy happiness and even going so far as to personally shake hands with and graciously thank everyone leaving a post-screening afterparty. Part of that kindness may be due to a post-screening high, of course, but for many, Shimabukuro’s simple act of consideration embodied something more. “The screening went great,” recalled Young. “There were over 1,000 in attendance, and dozens came up after thanking us for making the film. Most told us it’s so rare that films about Hawaii that are emotionally honest, but also celebrate Hawaii’s great uniqueness.

Here’s a re-cap video of the night, part of an ongoing webisode of Jake’s Grand Ukulele US Tour 2012! For tour dates visit jakeshimabukuro.com.

See more photos of the event here. And a cool promo video with director Tad Nakamura from our friends at Paliku Documentary Films.

Look out for the PBS premiere of Jake Shimabukuro: Life on Four Strings in May 2013 (Asian Pacific American Heritage Month).

Here are a couple of the awards the film has won: