We want to thank all of our contestants for taking the time to submit videos! Check out the playlist for all videos here. As you may know, Jake Shimabukuro himself was one of the original YouTube stars. We hope all of you continue to follow in his footsteps us with your unique styles, and support the growing and emerging ukulele movement.

We were so impressed by the quality, creativity, passion and diversity of our 28 contestants’ videos. From submissions by youth, to ukulele veterans and teachers, it was difficult to select just 5, and after much deliberation – we chose to expand our field of finalists to a total of 6. See why they made us smile, drop our jaws, click “play” again and again, and make us want to pick up a ukulele ourselves! 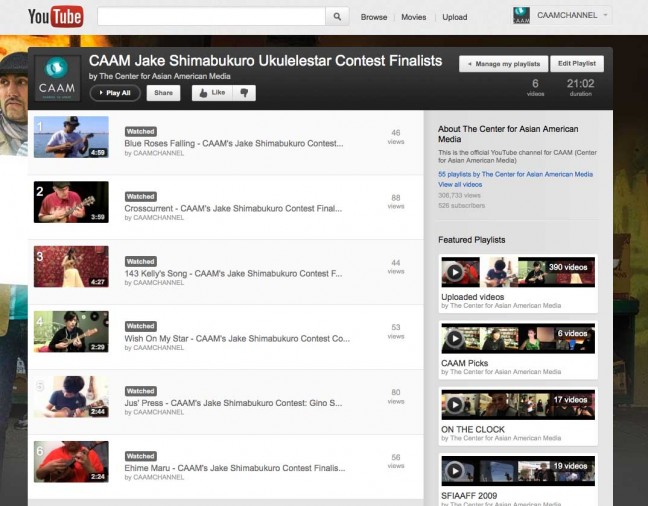 We’ll post the finalist videos on our Facebook page and Twitter over the next few days for everyone to view. If you would like the finalist to play with Jake, please vote with your “like” or comment. However, when all is said and done, Jake himself will be the ultimate factor in determining who will share the stage with him on March 14. Please watch all of the videos, and vote more than once. We look forward to seeing who will emerge as the winner, to be announced on the week of February 27th. Regardless of the outcome, we hope all of the finalists and contestants can attend the March 14 performance and meet your fellow ukulele players!

Brian Hernandez is a student at UC Merced, and hopes to follow a degree in Music. He also enjoys playing soccer. For the first round, Brian submitted a second entry, of “Let’s Dance“.

Brian started playing 1 year ago when his high school offered him an internship with the Los Angeles Asian American Music Festival, where he met Jake. After being blown away by Jake’s YouTube video of “Let’s Dance”, he became curious about the ukulele. He was fortunate to meet Jake backstage where he asked him if he would perform “Let’s Dance” for the crowd. Jake played it, and after that he was hooked. He dropped playing guitar, and bought his first ukulele a week later.

Why do you want to play for Jake Shimabukuro?
Playing for Jake for me would be a great honor and a dream come true. Just listening to his music, and watching his videos, makes me want to play the ukulele. I can imagine playing right next to him. It would be such, such an honor to share the stage with him.

Tell us something unique about yourself!
I am an amateur filmmaker. I have 19 movies under my name, which I directed. When I’m not filming, I’m in front of the camera acting. I make documentaries, action movies and comedies back home with my friends in L.A.

Monique learned the ukulele by watching and trying to copy YouTube videos! She also joined Ukuleleunderground.com and learned some uke from Aldrine Guerrero. For the first round, Monique submitted a second entry, of “Blue Roses Falling”.

Why do you want to play for Jake Shimabukuro?
This is a long-ish story. I’ve been a trombonist for most of my life and even decided to major in it when I got to college. However, early in my music major I was forced to quit playing the trombone due to a childhood heart condition I was suffering from at the time. Then, for my birthday I was given an ukulele, and saw Jake’s “Ukulele Gently Weeps” video. I was immediately inspired! Jake was the one and only reason why I picked up the ukulele. A year or so later, I had to undergo heart surgery and during recovery I completely lost my voice, so I turned to my ukulele and I began learning “Blue Roses Falling.” Playing that song really helped me through the whole ordeal and for that I am forever indebted to him. Performing onstage with him would be beyond a dream come true!

Tell us something unique about yourself!
I have a big, lucky birthmark on my left arm =D

Gino learned to play the ukulele in the 3rd grade in Honolulu, Hawaii, from an instructor named Jody Kamisato. He later was taught by Bruce Shimabukuro for 3 years. In the summer of 2009, he moved to LA, and is now teaching himself through his own original pieces and YouTube.

Why do you want to play for Jake Shimabukuro?
I’ve been a huge fan of Jake Shimabukuro ever since I was a kid. I first watched him perform in 2004 at Waikiki. He came up to me and I asked him from an autograph. I remember that the only thing I had with me for him to sign was a napkin from Zippy’s, but it was a heart-warming experience. I’ve always wanted to perform for Jake for a really long time and I feel that I can finally reach that goal.

Tell us something unique about yourself!
Ever since I moved to LA from Honolulu, I never had lessons or any professional guidance. However, I was able to find some friends that also had the same admiration for Jake Shimabukuro. My drummer, Haruka Komiyama, and my bassist, Cory Ng, formed an ukulele instrumental band called “Love&Peace” after the March earthquake that happened in Japan on 2011. From that we joined a “Help Japan” charity concert in southern California. Soon we started to gain recognition locally and started performing at various venues, whether it’s a volunteer charity event, or a professional gig. I have also started a club at my school for musically talented students to perform at volunteer events. This is my way of sharing the sound of music to my local community. I love playing the ukulele and Jake Shimabukuro is the person who inspired me to start playing.

Annier bought her first ukulele in 2010, as a dedicated piano teacher to youth from ages 3-12. While using the ukulele to introduce guitar to her students, she herself fell in love with the ukulele and with Jake’s music.

Why do you want to play for Jake Shimabukuro?
I have not had formal lessons with any teachers, YouTube is my best teacher. I also network with other ukulele players, such as Dominic (Dominator) who has helped me a lot. I love the Internet! Learning the ukulele has been very interesting, as I’ve met a lot of new friends, inside and outside of Taiwan. This would not have happened without Jake’s music and videos as inspiration.

Tell us something unique about yourself!
In 2010, I organized the first Taiwan ukulele enthusiasts group through the Internet and Facebook. Overtime, we’ve grown to all parts of Taiwan, with different regions hosting their own local gatherings. Together we’re letting more people know about the ukulele!

Dominic fell in love with the ukulele on a trip to Hawaii in 1997. It was also when he first heard Jake’s music. Dominic is self-taught and played lead guitar (aka Dominator) for most of his life.

Why do you want to play for Jake Shimabukuro?
Jake and his music have had such a positive impact on my life. It’s been a dream of mine to share the stage with Jake ever since I saw him perform “live” for the first time at Borders in Sacramento. At Borders I presented him with a copy of the tab I had just prepared from the video of “While My Guitar Gently Weeps” (the video in Central Park that he has become so famous for). Being able to spend some time with Jake and play music for him means so much to me.

Tell us something unique about yourself!
After coming back from Hawaii with my Pure Heart CDs in hand I started trying to find tablature for his music. A Google search for ukulele tablature for Jake’s music produced no results. In fact, at that time there was absolutely no ukulele tablature available on the Internet. That’s when I decided I was going to have to learn to play his songs myself. Over the next few years I kept practicing and started attempting to learn Jake’s music as well as other ukulele music I had become exposed to. I wanted to keep a record of my work and so I decided to create tabs to have as a reference. As I began creating the ukulele tabs I became more aware of other ukulele players that were eager to learn and anxious for tabs. That’s when I decided to create a free website called “Dominator Ukulele Tabs”. Over these last ten years I’ve had the opportunity to communicate with and meet many people from all over the world who share the “Aloha Spirit” of this precious little instrument we call the ukulele. Without Jake’s inspiration, none of this would have been possible!

Chris learned the ukulele mostly by watching videos of Jake and figuring out what he was doing with his hands. Before re-discovering the ukulele (he played as a child), he played guitar. Chris would like to give a shout-out to Aldrine Guerrero and everyone on UkuleleUnderground.com!

Tell us something unique about yourself!
I can play a total of seven instruments, all of them being string instruments. I have yet to learn a wind instrument.