If you produce content on YouTube or for Television, don’t miss this provocative Q&A from two industry thought leaders at the SFIAAFF30 Present/Future Summit, a townhall-style series of conversations on media and how it relates to Asian Americans. 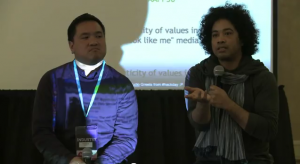 Executive Producer Quan Phung of Whitney (the #2 comedy on NBC behind the Office) and Internet Curator, Technologist, & Enthusiast Kenyatta Cheese discuss where YouTubers and Television shows converge. Here is their Q&A, preceded by thoughts from Steve Tao, President of CAPE (Coalition of Asian Pacifics in Entertainment):

Before their Q&A, Quan Phung discussed his show “Whitney” and how developing authenticity in your programs leads to long-term viewership and audiences.

Meanwhile, Kenyatta explained the importance of reaching your personal networks to expand your audience.

“Your network is so much bigger than you think it is”