Do you know the way to San Jose? We sure hope so because you don't want to miss our official San Jose Launch Party on Thursday, February 16 at Koji Sake Lounge! One month later, on Friday March 16, SFIAAFF packs up and heads down to the South Bay with KNOTS, our breezy, island-set San Jose Opening Night Feature by renowned director, Michael Kang.

Yes, we do know the way to San Jose! On Friday, March 16 we’ll be packing up and heading south to bring the creme de la creme of Asian and Asian American cinema to our South Bay audiences.

It all starts with our Opening Night Feature, Knots, the latest work by renowned director, Michael Kang (The Motel; West 32nd). In this beautiful Hawai’i-set, island powered romantic comedy, three sisters and their oft-divorced mother are much more successful at their wedding planning business than at their own love affairs. Filmed across Oahu and with a score by Hawai’ian phenom Jake Shimabukuro, Knots whisks us away to some much-needed variety in the family-comedy genre. Three strong multiracial lead actresses – Kimberly-Rose Wolter (who also wrote and produced), Mia Riverton (Red Doors), and Janel Parrish (Pretty Little Liars) – join hunky Festival favorite Sung Kang (Fast Five, West 32nd) and the fabulous Illeana Douglas for this breezy take on family ties and romantic entanglements.

After the Opening Night Feature, we’ll take a stroll to the distinguished San Jose Museum of Art for our San Jose Opening Night Gala Reception, where we’ll nibble on yummy hors d’ oeuvres and enjoy the Museum’s exciting exhibitions and collection.

Knots is just one of the films in SFIAAFF 30’s Pacific Island Visions program, featuring a selection of films that depict island living as more than the palm trees and hula dancing we often see on the screen. Instead, these works show contemporary life on the islands, ranging from the people of a sinking atoll to voyagers trying to revitalize the tradition of wayfinding. Films in this program include: Papa Mau: The Wayfinder, There Once Was an Island (Te Henua E Nnoho), and The Jake Shimabukuro Documentary. 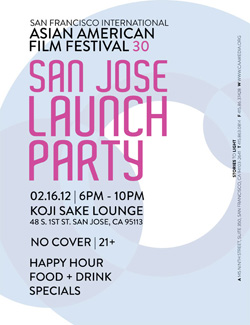 Finally, in classic SFIAAFF fashion, we’ll be kicking off the San Jose leg of the Festival with a celebration! Don’t miss out on our Official San Jose Launch Party TOMORROW NIGHT, Feb 16! Join us at Koji Sake Lounge in San Jose to celebrate the official launch of SFIAAFF30! Come out, pick up your hot-off-the-press Festival Program Guide, and get your fill of happy hour food & drink specials!