A month ago, the Center for Asian American Media hosted the Present Future Summit, a one-day conclave that brought together content creators and curators from across the media spectrum. The goal of this TED Talk-meets-townhall was to promote thought and discussion about new directions, challenges, and opportunities facing storytelling practitioners across a wide range of disciplines. Much of the conversation focused on the maturation of online content and its impact upon the industry.

What was striking, at least to me, was the idea that online content is now achieving a cultural primacy that is beginning to displace television and film.

Youtube and its ilk have been around for years. However, until recently these outlets were only seen as sources of content and talent for “old media,” a sort of digital farm system. For producers and development execs, vblogs and lo-fi alien invasion films were just one more arena to scour for fresh voices. Indeed, a few years ago, when I had the opportunity to ask some studio executives about what they could possibly glean from a three-minute web video, the answer was, surprisingly, hits. To these execs, the specific content was actually less important than the number of times it had been viewed. A couple of million views was a useful statistic, a metric that they could take to their studio overlords in the quest to obtain the ever-coveted greenlight.

Even as recently as two weeks ago, Wired magazine reported a story about James Erwin, a software manual author and amateur history buff whose Reddit posts about a fictional encounter between a modern US Marine Corp unit and the Roman Empire had resulted in a bona fide screenwriting deal. Erwin had won the lotto, and Reddit had been legitimized, because old media had plucked him from obscurity and sent him up to the big leagues.

The idea that digital content is now the main event, no longer a hip marketing add-on or an early, pay-your-dues phase in one’s career, can take a little getting used to. At the Present Future Summit, even the new media wunderkinds in the room, Wesley Chan, Ted Fu, and Philip Wang of Wong Fu Productions, professed a desire to be accepted by the larger industry, even while they and their contemporaries are forging a new marketplace that is truly independent in a way that longform narrative filmmakers such as myself can only dream about.

Listening to them talk about their accomplishments, it was hard not to compare the choices that I’ve made in my career. What if, instead of building content for the last eight years, I had chosen to build a large, unmediated, independently accessible audience instead? It’s an unsettling thought, particularly when paired with the idea that the film industry, which I’ve been trying to scratch and claw my way into for better part of the last decade, is waning, at least in its current form. 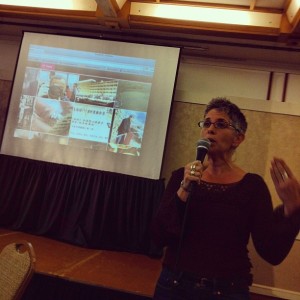 Many of the speakers at Present Future raised questions about potential next steps and offered, if not solutions, then at least ideas that about where to begin looking. One of the most reassuring came from Wendy Levy, senior strategist at Tomorrow Partners and former creative director at the Bay Area Video Coalition. She reminded the audience that in spite of technology’s increasing impact, content creators must still begin with the story and only then select the specific digital tools to deploy in the service of that narrative. “Creative ideation,” she warned, “needs to platform agnostic.”

As one who worked in other creative disciplines prior to filmmaking, the emphasis on finding the right stories – the ones that we’re passionate about and believe will serve our audiences – was well worth hearing again. Great stories told with good craft will always rise to the top, no matter where they are shown. However, thought and attention must still be given to distribution and how it creates parameters around narrative content.

While stories should pick their platforms and not the other way around, platforms do inherently promote specific formats, which in turn inform story types and arcs. Just as live theater is naturally a verbal medium while film is primarily visual, there are stark differences between the types of stories that can be explored in a three to five minute webisode versus those told over the course of a 90-minute feature length film. Many of the storytellers finding success in new media are doing so as on-camera, personally branded performers. My own personal awkwardness notwithstanding, there are many reasons that I want to be behind the camera and not in front of it.

In thinking about the questions raised at Present Future, I would echo a thought and prayer voiced by many from the “old media” side of the aisle:

How, in this new paradigm, do we continue to successfully and sustainably make author-driven
longform narrative content?

The solutions, I suspect, will be as diverse as the questions.

Here’s the video from Wendy Levy:

More: Here’s a blog from CAAM Student Delegate Samantha Yu on Wong Fu Productions at Present/Future Summit
See all of the blog posts on Present/Future
Present/Future playlist on our YouTube CAAM Channel