And the jury has announced the winners!

Congratulations to: In The Family (Best Narrative and Emerging Filmmaker) and
A Lot Like You (Best Documentary)

For the second time, SFIAAFF has partnered with Comcast to present the narrative competition awards. The jury included award-winning Korean American filmmaker Benson Lee; Priya Giri Desai, whose work spans print, TV and film and who has worked for Life Magazine and PBS, among others; and Robynn Takayama, currently producer of Apex Express, an Asian American show on KPFA.

Jury Statement: This year marks the 30th anniversary of the SFIAFF, and the films in this year’s narrative competition served as a beautiful reminder of what all this festival represents: from loving fathers in In the Family, to conflicted gangsters in Bang Bang, a young woman coming of age between two cultures in Viette, to haunted souls in I Am a Ghost, confused rockers in Surrogate Valentine 2, commitment-phobic friends in The Crumbles, to a sexually liberated manicurist in Touch. There was no shortage of narrative depth to these quote-unquote, Asian American films. As Salad Days makes clear, how we share information is more relevant than ever to building character. As these filmmakers in the narrative category have shown, they know how to use this knowledge, to make more nuanced, sophisticated films than ever before, even as first timers.

This year’s winning narrative film, is like a perfect recipe: something complex and layered that, when consumed whole, transcends its individual parts. A slice of life, but one that’s cut to reveal the jagged edges of reality and all its imperfections: how families ravel and unravel over time, how love is first discovered and then must endure hardship and loss. This director found those sweet spots and then had the nerve to dwell on them: in the dialogue, in the framing of shots, in the lingering of moments over time. The wisdom to stay with a feeling, to give the audience the time to insert themselves into the scene and imagine how the character feels — the director has shown great restraint and resolve all at once. This film is not just a family film, nor a gay film, nor a southern film, but a human film that challenges and comforts all of us in some way. The jury recognizes Patrick Wang’s unbelievable first effort as a writer, director, actor, producer, and awards him the 2012 SFIAAFF Comcast Narrative Jury Prize for In the Family.

The Last Screening of In The Family is Saturday, 8pm at Pacific Film Archive Theater in Berkeley!

Patrick Wang (Director) Statement: Thank you to the jury and to all who work so hard to make this festival run. I had a swell time visiting the mothership. Thank you for having awards. We still are engaged in the challenging work of reaching our audience, and this award helps enormously to extend our reach as we self-distribute the film this spring to cities across the country. But most importantly, thank you for being a friend to the movie and to me. What an underrated force friendship is in art. But I felt it in San Francisco, and I want to call it out for how terrific and essential it is. Thank you.

Jury Statement: A LOT LIKE YOU takes us on a personal journey into the most vulnerable corners of a family history spanning generations and continents. This layered documentary starts with a familiar exploration of mixed-race identity as the narrator searches for her roots, but brings the discussion to surprising levels of personal and political self-awareness. Fresh and inspired, tender and uncommonly smart, A LOT LIKE YOU triumphs as an exemplary work of first-person documentary for the 21st century. 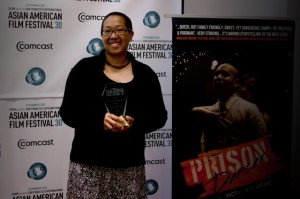 Eliaichi Kimaro (Director) Statement: …(from the A Lot Like You blog) I wanted to express my gratitude to the Center for Asian American Media and the San Francisco International Asian American Film Festival for recognizing that even a film that takes place almost exclusively in a rural village on Mt Kilimanjaro in East Africa could be relevant, and possibly even contribute and shape and help inform the conversations we’re having about the Asian American experience in this country.  And for this expansive, inclusive understanding of what constitutes ‘Asian-American,’ I am truly grateful.

I know this recognition will help open doors to future collaborations with community based organizations or film festivals or university departments working with Asian/Asian-American/Mixed-race/Indigenous peoples.  And I can think of no greater gift for a first-time filmmaker than this gift of Access.

So thank you for paving the way for A Lot Like You to move out into the world, with intention, so that it can continue to do its work…

This festival’s newest addition to the award category is designed to cultivate and showcase emerging talents from around the world. Eleven films have been nominated and the jury included Skye Christensen, who has 10 years of experience in media and arts education at multiple Bay Area colleges and museums; Anderson Le, director of programming for the Hawaii International Film Festival (HIFF) and Director of the Los Angeles Asian Pacific Film Festival; and playwright, attorney, journalist, and humorist Wajahat Ali.

Jury Statement: Patrick Wang’s IN THE FAMILY is a sensitive and layered approach to several topical and controversial issues, but presented without sensationalism or exploitation. Writer-director-producer and star Patrick Wang paints an emotionally complex humane portrayal of modern-day America, infused with southern charm. IN THE FAMILY is a testament to American independent filmmaking’s ingenuity, passion and resourcefulness.

Patrick Wang Statement: Congratulations to the festival for adding this new category.  I love how thirty years in, you can find something new to celebrate. Thank you to the jury. I think we share a kinship in our excitement about how old sensibilities can lead us to very new discoveries in film. I look forward to surprising you, and myself, with my next movie.