Update: Watch ALL of the pitches on the CAAMChannel!

The Center for Asian American Media is excited to host the first-ever READY, SET, PITCH! panel at SFIAAFF! This is a free event for the public.  Join us and cheer on our competing producers as they pitch their project for a $5,000 Research and Development award to be decided by the jury.

Here’s the scoop on the very diverse and exciting projects which will be presented at Ready, Set, Pitch ranging from documentary filmmakers to animations!

OUT RUN (working title) is a feature-length documentary that follows LGBT activists in conservative parts of the world who choose to seek highly visible positions as elected politicians. Bemz Benedito, a transgender candidate for Congress in the Philippines, and David Kuria, a gay activist running for the Senate in Kenya, campaign to become the first openly-LGBT elected officials in their respective countries. Hostility from the government, discrimination from religious leaders, and persecution by vigilante homophobes are just some of the obstacles David and Bemz will encounter. Will putting a public face on their largely silent LGBT populations move these societies in a positive direction, or will their efforts provoke backlash? What will David and Bemz’s stories reveal about the current condition of the global LGBT community?

See the Out Run IndieGoGo campaign.

Synopsis: Teshya Alo is 14 years old and a hundred pounds. But on the judo and wrestling mats, she throws down women twice her age and pounds heavier. And she beats boys. Now, she has her sights set on the 2013 Judo World Championships and eventually the Olympics. But it won’t be easy. Her raw talent provokes jealousy. Her training strains her family’s resources. She’s a student at a select private school for Native Hawaiians. And she’s going through puberty.

THE ANIMATED ADVENTURES OF JUDO GIRL is the story of this teen phenom whose soaring athletic ambitions and winsome personality make her an impressive–and at times threatening–force. The one-hour documentary mixes HD verité footage of real life Teshya with animated sequences of Judo Girl, a Flash animation character representing Teshya’s dreams and emotions. Part athletic journey and part coming of age tale, the film introduces the world to an elite athlete striving for gold and a mixed-race Polynesian girl just discovering the joys and challenges of life.

Lisa Katayama
Project: We Are All Radioactive

A crowdfunded online episodic documentary about a group of surfers rallying to rebuild Japan after the March 2011 earthquake and tsunami. In the summer of 2011, a few months after the quake, our film crew befriended a group of surfers based in Motoyoshi — a small coastal town 100 miles north of Fukushima. Living in tents pitched on one of the only unaffected patches of land in town, these surfer-turned-activists are rallying to get a multi-generational community of fishermen and farmers back on their feet.

In Japan, we shot interviews with locals, anti-nuclear activists, and global experts on radiation. We also gave waterproof video cameras to the residents of Motoyoshi, so they can film their experience through their own lens while we’re not there. The result is a series of beautiful and informative vignettes that get more up close and intimate than an ordinary film crew could ever get. We Are All Radioactive combines technology, entertainment, and solid investigative journalism to provide answers to fundamental questions about radiation and the complexities of disaster response on both a political and sociological level.

See the We Are All Radioactive IndieGoGo campaign. 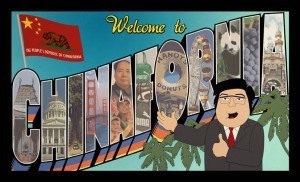 America, 2018. The economy remains in a tailspin. Some Americans even cancel their cable. Unable to pay the $10 trillion it owes to China, the U.S. comes up with a plan: it gives China the state of California.

Chinafornia is born, and Chinese Vice Premier Jidong Chen is placed in charge. It will be up to Chen – who has studied California through meticulous viewings of Baywatch – to manage the takeover & the chaos that follows. And it will be up to reporter Jasper Davenport, “America’s Most Watched & Most Sexy Newsman,” to force Chen to answer to the people of Chinafornia.

Can Chinese determination & American creativity combine to build a better world? Or will Chinese stubbornness & American stupidity form the perfect cocktail for a state even more screwed up than California already is?

KHSARA is an Arabic word that means “too bad” or “what a shame” as in “Too bad! She’s decent looking, educated, and from a good family… but still single.” KHSARA is a narrative film that tells the story of 29 year old Nisreen, a young Arab American woman who has lived her life to please everyone around her: her family, her faculty, her students, her friends, societal expectations and of course, her boyfriend. But after her relationships falls apart, the world she knows crumbles around her. Through Nisreen’s story, KHSARA aims to address several social issues surrounding Arab American identity, marriage, and immigrant communities. Through a fun and lively audience engagement strategy, KHSARA will engage a community of women and celebrate the playful energy surrounding the project. It seems every country has their own take on “khsara” and single women.

Hope to see you tomorrow, March 11th at Ready, Set, Pitch! (did we say free?) Meet our presenting producers.

This event will precede “Present/Future”, a Summit on Asian Americans in Media! (1-4pm, Also at Hotel Kabuki)