I recently saw TIBET IN SONG at the Lumiere. It plays until 11/18 at the Lumiere, and I highly recommend it. (There will be a DVD release next February.) Filmmaker Ngawang Choephel traveled to Tibet in the late 90’s to document folk music. 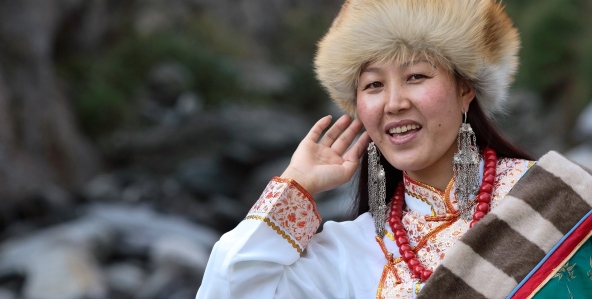 “When the power of love overcomes the love of power, the world will know peace.” Sri Chinmoy Ghose (and Bob Marley)

I recently saw TIBET IN SONG at the Lumiere. It plays until 11/18 at the Shattuck, and I highly recommend it. (There will be a DVD release next February.) Filmmaker Ngawang Choephel traveled to Tibet in the late 90’s to document folk music. He found music in the very blood of Tibetans – in rural areas, people sang Yak Milking songs, Butter Churning songs, Roofing songs, and of course, Drinking songs. People he met on the street would break into their favorite melodies, some as old as a thousand years. But against these traditions, comes the force of the Chinese invasion and occupation. Choephel begins to document how the Chinese government has actively suppressed Tibetan culture and tried to replace it with maudlin Maoist anthems. The traditional lyrics of folk songs (focused on Buddhist transcendence) are replaced with lyrics praising communism; Tibetan singers are co-opted; Chinese music blares on loudspeakers in Lhasa; Tibetan children’s first songs are military hymns taught to them in school. The Chinese regime recognized the propaganda value of music, and set up pro-Beijing music and dance troupes in over 100 towns across the vast Tibetan plateau.

Choephel begins to document, but then is arrested by the local Chinese police and accused of espionage. He ended up serving 6 years in prison, and was only released in 2002 after a high-profile campaign by his mother and human rights organizations. Luckily, he had sent out a good bit of film before his arrest, from which he was able to pull together his documentary.

His film is a powerful reminder of the importance of human rights around the world. This week, we celebrate the release of Daw Aung San Suu Kyi. With thousands of political prisoners in Burma alone, and 2010’s Nobel Laureate Liu Xiaobo and other Chinese dissidents still in jail, our work is clearly not done. If music – and movies – could “tame the savage breast” of dictators, TIBET IN SONG would open prison gates around the world. It will open your heart, and make you think about the frightening outcome when power triumphs over love and humanity.

Ravi Chandra is a psychiatrist and writer in San Francisco. He is happy to be included in the new, groundbreaking South Asian American poetry anthology, INDIVISIBLE http://www.indivisibleanthology.com/anthology/, edited by Neelanjana Banerjee, Summi Kaipa and Pireeni Sundaralingam (University of Arkansas Press, April 2010)