On a warm Sunday afternoon, September 26th a Commemoration of the Life and Work of Loni Ding was organized by the Ethnic Studies Department and Asian American Studies Program at UC Berkeley, with the participation of CAAM. 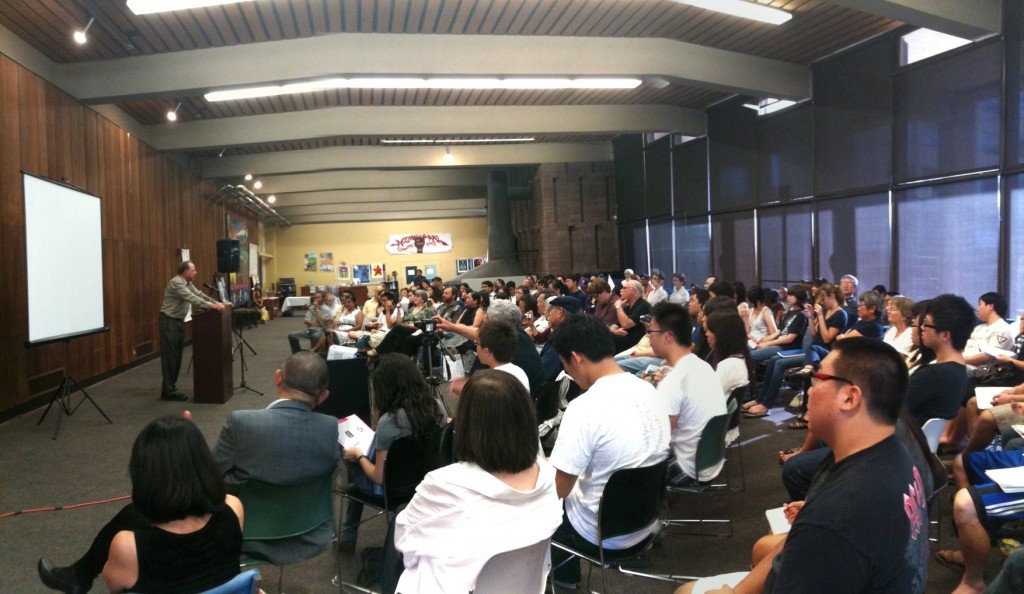 On a warm Sunday afternoon, September 26th a Commemoration of the Life and Work of Loni Ding was organized by the Ethnic Studies Department and Asian American Studies Program at UC Berkeley, with the participation of CAAM. Over 150 friends, colleagues, students and former students attended and shared various stories and reflections about this remarkable educator, community arts activist, and filmmaker who passed away last Spring. The gathering was organized to provide those who missed her funeral, and a new group of UC Berkeley students, a chance to celebrate Loni’s achievements.

The commemoration was held in the Martin Luther King, Jr. Multicultural Center in the UC Berkeley Student Union, a fitting setting just downstairs from the site of the 1980 Asian American Producers Conference that resulted in the founding of CAAM, and Loni was the driving force behind the conference. (See here for my personal reflection on Loni, and here for others).

Professor Ling-chi Wang, a friend and colleague of Loni’s for most of her professional career provided an overview of her life’s work to give voice to the experience of Asians in America, and to use film as a medium for positive social and cultural change. I introduced a short film chronicling Loni’s life and work as a filmmaker and activist for social change that was produced and edited by former Board member Walt Louie.

It was great to hear from her former students, like Spencer Nakasako and Dharini Rasiah, who told stories of how she had transformed their careers and lives. Especially moving, at the end of the ceremony, her husband David Welch sang a beautiful a capella rendition of “Keep Your Eyes on the Prize” with special lyrics about Loni.

We also announced the Loni Ding Award for Social Issue Documentary Short, which will be awarded annually during the SFIAAFF and will carry a cash award of $1,000. (Initial funding has been awarded by the Asian American Journalists Association in the memory of Dr. Suzanne Ahn, as well as with donations from some of Loni’s friends and family).

The Loni Ding Award winner will be selected annually by a Loni Ding Award selection committee which will be made up of CAAM Program Staff and filmmakers who are Loni Ding’s former students. The Award will be given to a promising Asian American shorts filmmaker whose work exemplifies the spirit and vision of Loni Ding’s commitment to social issue documentary filmmaking and illuminates the experiences of underrepresented communities.