The Asian American Theater Company completes its 2010 Season with the world premiere of BEIJING, CALIFORNIA a new play by Paul Heller. 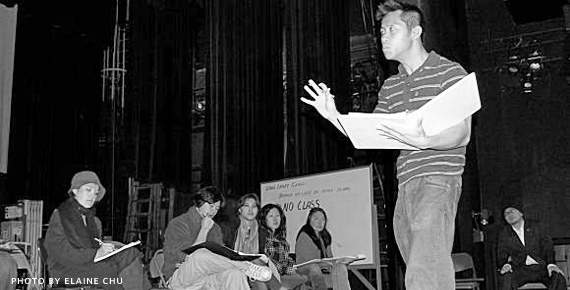 The Asian American Theater Company (AATC) completes its 2010 Season with the world premiere of BEIJING, CALIFORNIA a new play by Paul Heller, based on a story developed with and directed by Duy Nguyen. BEIJING, CALIFORNIA opens July 1, 2010, and runs for three weeks, through July 17, 2010, at the Thick House, 1695 18th Street, San Francisco.

BEIJING, CALIFORNIA is an unflinching study of one nation’s invasion by another–but this time, the victim is not Iraq or Afghanistan; rather, it is America, and the invader is China. As playwright Paul Heller noted in his January 29, 2009 interview with the San Francisco Chronicle’s 96 Hours, “I hope the audience members will look at their own values and their perceptions of other countries–and how those might change if we were the ones being invaded. What I think we’ll see is that Americans would act like everybody else in the world if they became citizens of a Third World country.”

The play’s futurist scenario takes place in 2050, when Katrina-like disasters and a series of financial meltdowns lead to America’s collapse. The audience follows a series of characters and stories in the Bay Area over a span of 50 years, and discovers what happens to American values in the aftermath of foreign occupation.

Beijing, California is generously funded by CA$H, a grants program of Theatre Bay Area, in partnership with Dancers’ Group; Grants for the Arts/San Francisco Hotel Tax Fund; the Phyllis C. Wattis Foundation; and the Zellerbach Family Foundation.
AATC is part of the Thick House Presenting Program.