Freida Mock's films are full of hope and enthusiasm for the best of human possibilities. Look for her during her conversation with CAAM on Sunday, March 14th. 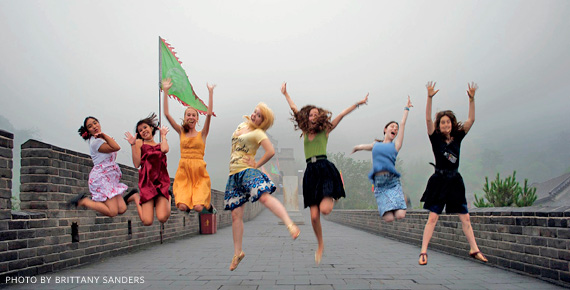 Freida Mock is the documentarian most likely to make you want to make babies and live forever. Her films are full of hope and enthusiasm for the best of human possibilities. You probably know her best for her Oscar-winning MAYA LIN: A STRONG, CLEAR VISION. Mock verifies her own strong, clear vision in her two films showcased at the SFIAAFF this year: SING CHINA! (a follow up to her Oscar nominated film SING!) and LT. WATADA. The following “Five Questions for Freida Mock” were answered through an email exchange before the festival. I look forward to hearing more from her during her conversation with CAAM on Sunday, March 14th.

RC: How do you think being Asian American has influenced your choice of subjects?

FM: Like most filmmakers who want to be open to all possibilities – ideas, characters, stories, subjects – I’m very aware though that when I read or hear about an Asian American person in the news for instance, or see a photo, such ‘Asian-ness’ catches my eye and occasionally leads to the development of a film project. This was certainly the case of the film LT. WATADA and MAYA LIN. In both instances I read a story in the newspaper; in the case of Ehren Watada in the New York Times which also included a striking photo. The idea for the MAYA film was piqued by an article in the Washington Post that my cousin sent me, describing Maya’s work on what she thought would be her second and last memorial, the Civil Rights Memorial, which was to be built in Montgomery, Alabama. A light bulb went off when I read the piece and I said, “Perfect, a film about these two big ideas, war (Vietnam Memorial ) and race and how does an artist express these ideas in a three dimensional form (as opposed to expressing these ideas on in a monograph or a poem, or other form of creative expression)?

RC: Looking back on your body of work so far, what have been the defining or motivating features of your documentaries?

FM: The motivating feature on a professional and personal level is that I hope the audience doesn’t walk out, feels bored or fidgety, ‘throw tomatoes’ at the screen so to speak. So I try to structure the stories and the film so that it’s hopefully an engrossing, surprising, hopefully a fun and memorable experience for the audience.

RC: Since all your films are in some sense about America or American personalities, what message(s) would you like your audiences to take home about the America and the American experience?

FM: The stories and characters may be grounded in America but I like to think there are universal aspects and resonance to the ideas and themes in the films. For instance, RETURN WITH HONOR about American fight pilots as POWs in Hanoi is really a story about survival and how one draws upon spiritual, emotional, psychological and physical strengths to survive a torturous situation. I think this would apply to guys in the gulag in Russia or the prisons of Pot Pol. Issues that Maya faced of creative freedom and politics, censorship and racism are human concerns, beyond borders.

RC: What I do think I get from all of your films is a tremendous sense of individual spirit and dedication; this is in contrast to other documentarians’ work on period history, events, and so forth. Perhaps that’s the “American theme” which was stirring in the back of my mind when I wrote my questions. The times and the transcendent are best illustrated by the individual, of course, and the individual viewer is transformed as much as they’re informed by your work. And of course, individual spirit is not only American – but it does seem to be a theme.

RC: How do you think you’ve changed through your work?

FM: I think my eyes have been opened – about people, places, ideas, the world – but I’m not sure if this wouldn’t have happened if I had taken a different path, as a banker, lawyer, baker, bricklayer, etc…

(Freida Mock alluded somewhat mysteriously to her next project, but declined to go into detail. So now I have even more reason to hear from her on Sunday!)

Ravi Chandra is a psychiatrist and writer in San Francisco. He is happy to be included in the new, groundbreaking South Asian American poetry anthology, INDIVISIBLE http://www.indivisibleanthology.com/anthology/, edited by Neelanjana Banerjee, Summi Kaipa and Pireeni Sundaralingam (University of Arkansas Press, April 2010)