I seem to focus heavily on the big pieces (besides FRUIT FLY), opening night's MY DEAR ENEMYand last night's closing feature, TREELESS MOUNTAIN. But anyhow, the story follows two sisters whose mother leaves them behind and they're left to take care of themselves. 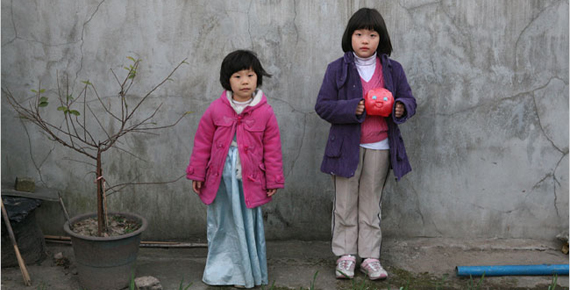 I seem to focus heavily on the big pieces (besides FRUIT FLY), opening night’s MY DEAR ENEMY and last night’s closing feature, TREELESS MOUNTAIN. But anyhow, the story follows two sisters whose mother leaves them behind and they’re left to take care of themselves.

Director So Yong Kim said to the audience after the screening last night that she didn’t create this film or the story based on themes, but on emotions or the universality of human emotion through a child. But despite that, the film is pretty clear in touching thematic aspects that the audience picked up.

Jin and Bin and their mother live in the urban setting of Korea in the beginning, and even though they’re poor, it’s still a pretty modern environment. When their mother leaves them with their alcoholic-prone-hence-amazingly-negligent big aunt, the girls are transported to a much suburban town with only their clothes and a disturbing looking piggy. Okay, I don’t blame Bin for messing around with the pig because I have two of those at home and they’re not the most attractive things on planet Earth. Mother dearest tells them that once they fill it all up with coins, she’ll come back for them. The audience is all, “Fat chance kiddos.” But we hope they will persevere because they’re our protagonists. And well, they’re cute.

Big Aunt’s village is pretty barren, there’s a lot of rubble and grasshoppers, which Jin cleverly uses as profit commodities until she burns them and kids are basically paying to eat ash. But Jin is no longer enrolled in school so she and her sister have to amuse themselves while their aunt is off doing who knows what. What gets me during the girls’ stay at their aunt’s is when they realize they can turn all their big coins into small coins to fill up their piggy bank faster. Too bad the whole thing is a big let down, sitting at the bus stop, waiting for their mother…until Jin reaches the tragic revelation for a child that mom? Ain’t coming back.

Aunt’s finally fed up with them and makes up a letter (or not) that she pretends their mother has written them, telling them that it’s time to move in with Grandpa and Grandma. If you thought Big Aunt’s town sucked, wait until you see Grandpa and Grandma’s place; it’s out in the freaking BU-FU. This place is so rural, it’s primitive. Electricity? Right, there’s a fireplace. At least with Big Aunt, there were other people around, other kids to play with. With Grandpa and Grandma, the girls work. By this time, Jin’s and Bin’s clothes are quite worn out, the faux fur on Bin’s dress is grey, and Jin’s clothes probably have holes if inspected closely. Food has progressed from some relevance of meals (fishcake soup, sweet buns) to sweet potatoes being roasted in the ashes.

At one point in the bu-fu, Bin says to her sister, “I miss home, I miss mom…I even miss Big Aunt.” There’s nothing like saying you miss a person that hardly even paid attention to you, forgot to feed you, was so stingy that buying just something a little new for you would be impossible. And being in the bu-fu nowhere, that shows exactly how lonely it is with no one but two people who are too old to do all that labor.

We know the piggy bank is symbol of false hope, of a burden that Jin and Bin carries around until Jin sees Grandma’s shoes has holes in them and she gives up the piggy bank to her to get new shoes. At that moment, the burden is lifted and Jin has reached a place of understanding, of acceptance of her and her sister’s new life. Yes, we know, she grew up.

Throughout the movie, I felt claustrophobic, mainly because there were so many tight frames and not a lot of wide frames (understandable because So Yong Kim tells us that she literally sat/stood next to the kids and delivered their lines for them and if it wasn’t tight, she’d be in frame). And the lack of musical score? Definitely helped enhance the loneliness the girls face, the barren landscape, etc.

Man, what a film. And the kids had no idea they were making such a thing.

Stuff I must catch later because of midterms: TOKYO!, HALF-LIFE