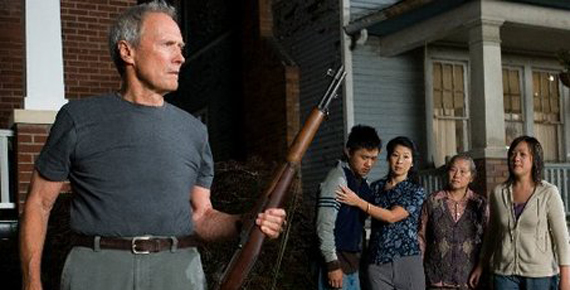 Out of all the reviews of Clint Eastwood’s new film Gran Torino, my favorite line is by Alex Markerson: “Gran Torino isn’t Eastwood’s best film, but it could definitely go down as his weirdest.” (E! Reviews). Gran Torino is a strange hybrid of comedy and melodrama; audiences who have seen the melancholic previews might be startled by how much of a comedy the film is in the first half. The film openly satirizes the Dirty Harry persona by imagining Clint Eastwood’s character discontentedly living out his retirement years with a dog named Daisy and a front lawn decorated with gnomes. He is the last white resident in a Detroit neighborhood now populated by Hmong families. This could be the premise for a King of the Hill episode or a MADtv sketch, with Dirty Harry making his last stand by yelling at kids to get off his lawn (which Eastwood actually does in the film). And the film is strongest when it openly acknowledges the absurdity of its characters trying to perpetuate roles that no longer fit them or their environment.

Much of the absurdity has to do with an atavistic sense of masculinity. In one scene, Asian and Latino gangs measure their manhood by comparing gun sizes; in another, the young Asian heroine (played by Ahney Her) finds herself caught in the crossfire of black and white teenage testosterone and finds both versions lacking. In the most excessive parody of masculinity, Eastwood’s character tries to show the young Hmong hero Thao (played by Bee Vang) that manhood can be learned through a few simple steps like going to the barber shop and mouthing off about women and minorities. The scene plays like an updated version of the 1950s film Tea and Sympathy, in which sensitive John Kerr learns how to walk like a man. Even more overtly, the central relationship between Eastwood and Vang plays like the flip version of The Karate Kid, with a gruff old sage teaching a young man that painting fences and waxing cars are the first steps to an ancient and exotic form of power (in this case, a construction job rather than martial arts). The very title of the film and the object of many of the characters’ desire is, in fact, a vintage American car which represents the kind of masculinity that belongs to another era. It is fetishized by the girls as well as the boys, the white relatives as well as the Hmong gang. To the bemusement of Eastwood’s character, everyone wants it.

I wish Eastwood as a director had kept this absurdity in the foreground rather than upping the ante for the dramatic second act. You can tell what the writers Nick Schenk and Dave Johannson had in mind when they go there, but it’s as if the characters who were openly deconstructing their roles have learned that these roles have a terrible truth to them that cannot be questioned, altered, or escaped. The second half of the film could have taken the comic elements to their extreme and exposed the hollowness of all the roles the characters are trying to play, like the screwball climax of What’s Up Doc when the characters realize that no one has the right suitcase. Instead of questioning the investment that everyone has in the Gran Torino, this film reaffirms that it is still worth having and that the rightful owner will claim it, even if it’s not the way that Dirty Harry would have imagined.