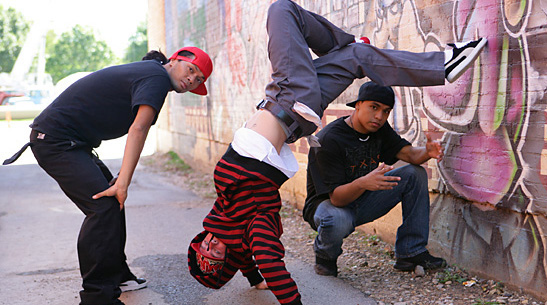 Romeo Navarro, Joshua “Milky” Ayers and Omar Davila of Inside the Circle.

Capturing the defiant creativity of a home-grown hip-hop movement, the award-winning documentary Inside the Circle follows talented b-boys Josh and Omar, former best friends turned rivals. As Josh tangles repeatedly with the law, Omar rises to international renown over the objections of his traditional Mexican-American father. Both b-boys struggle to keep dance at the center of their lives, and the “B-Boy City” competitive events thrown by visionary street dancer Romeo Navarro serve as emotional milestones in their journey to adulthood. As Romeo aptly observes: “If you can hold yourself down in battle, you can hold yourself down in life.” (Audience Awards: SXSW 2007, San Diego Film Festival 2007, New Orleans International Human Rights Film Festival 2008).

Before it was even known as hip-hop, the street culture that emerged from the streets of the Bronx was primarily represented to the outside world in the form of graffiti and b-boying. This was back in the late 1970s and early 1980s, when most of the world didn’t even know what rapping or scratching was. With the emergence of rap as the preeminent representative of hip-hop, the two earliest introductions to the culture, graffiti and b-boying (more popularly known as breakdancing), soon faded from the spotlight. But that doesn’t mean either went away, especially breaking, which has continued to thrive and grown into something far more pure than rap, which has been corrupted by corporations that turned the culture of hip-hop into a global commodity.

There have been a handful of great documentaries about b-boys, most notable The Freshest Kids, which traces the history of the b-boy, and Planet B-Boy, which examines how breaking has grown into a global cultural movement. Both films are great in their own way, enough so that you might think there wasn’t the need for another documentary about b-boys. But director Marcy Garriott’s Inside the Circle has emerged as an equally essential story within the world of b-boys.

Garriott’s film takes place in Austin, Texas, a city that one hardly thinks of when thinking of b-boys or breakdancing. But that is part of what makes the film work. By focusing on a city that doesn’t readily come to mind when thinking about hip-hop in any of its permutations, Garriott immediately sets the stage for the profound impact b-boy culture has had on the world.

Inside the Circle profiles three young men. First, there is Romeo Navarro, a dancer-turned-promoter who runs the annual B-Boy City competitions in Austin. Romeo is integral to the story in that he has helped foster the community from which Omar Davila and Josh Ayers, Garriott’s other subjects, have sprung. Both still in their teens, Omar and Josh are good friends, but as they grow older and further apart, they become rivals. Josh is a kid with a temper, who keeps finding himself in trouble with the law. Much of time that Josh should be spending perfecting his dance skills are spent in juvenile detention. By contrast, Omar manages to stay on the right side of the law, and he soon becomes a regional b-boy legend, eventually becoming a global phenomenon.

While the dancing in Inside the Circle is amazing—incredible displays of acrobatics, rhythms and macho bravado—the real story is the human drama in the lives of Josh and Omar. Josh is a talented kid, with some impressive moves on the floor, but his anger issues and his inability to stay out of trouble not only threaten his dance career, but his very freedom. He is a frustrating kid that is too smart to be acting so stupid, and watching him potentially throw his life away is nothing short of sad. Meanwhile, there is Omar, who seems to be blessed by the b-boy gods. While Josh deals with probation issues and leads the nomadic life of a couch-surfing teen, Omar travels the world, becoming a superstar in the b-boy world. His father, a Mexican immigrant, wants Omar to go to college and take on an honorable profession, but even he can see that there is no stopping his son’s star from shining.

Inside the Circle is at times as much about b-boys and breaking as it is about the lives of two young men coping with the difficulties of growing up. This is where the film gets its heart and soul, lending an undeniable humanity to the documented history of b-boys. Garriott does a great job of balancing the dance floor action with the human drama, creating a documentary that is both exciting and endearing. But what she also does is show how an underground art form born in the Bronx has become an instrumental part of the lives of people all over the world, growing into a global community.