By Misa Oyama Last month an Asian American protest against Sacramento’s free public screening of Breakfast at Tiffany’s led to the film’s cancellation. Although the film is famous for Audrey Hepburn’s starring role, it also includes Mickey Rooney in a minor role as a buck-toothed Japanese landlord. 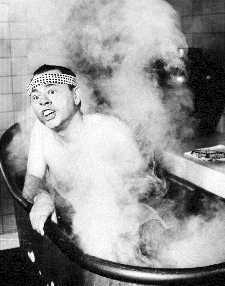 Last month an Asian American protest against Sacramento’s free public screening of Breakfast at Tiffany’s led to the film’s cancellation. (Although the film is famous for Audrey Hepburn’s starring role, it also includes Mickey Rooney in a minor role as a buck-toothed Japanese landlord.) Before the film’s cancellation, a few people offered the compromise of showing the film without Mickey Rooney’s scenes, if such a thing were possible. You can read the full article by the Hokubei Mainichi here.

This incident reminded me of an argument I had a long time ago with another Asian American woman. She maintained that she enjoyed the film Breakfast at Tiffany’s because she loved Audrey Hepburn and her style; her pleasure in Hepburn’s performance mattered more than the Japanese caricature. Back then I dismissed her pleasure as naive, but more recently I have been thinking a lot about how I view entertainment and what I am willing to accept in order to be part of the audience.

Being an Asian American viewer involves a trade-off. If you are watching a film or TV show, sometimes you have to bracket a scene, actor, or subplot that might be racially problematic in order to enjoy the rest of the film. For example, I enjoy the HBO series “Sex and the City” (which is now practically unavoidable in syndication), but in the episodes where race comes up, I’m tempted to change the channel. Not always—I’ll usually watch the episodes with Margaret Cho and Lucy Liu, but channel-surf if I see the episode where the white leading lady Carrie is horrified to be propositioned by a Japanese businessman (one of the three or four times an Asian man spoke a line in the entire series). For me, the real deal-breakers are strangely enough the episodes that try too hard to depict the white characters’ lack of racism. In one episode, which posed the very question about deal breakers in relationships, it is emphatically the black community—not the white one—which is intolerant of an interracial couple. In another episode, a black female chauffeur is so ecstatic about Carrie’s book party that it’s unsettling and disturbing, like watching an old Hollywood classic where a black servant suddenly appears to provide comic relief. At moments like these, I change the channel.

Still, I don’t boycott the series as a whole, because I feel that it is entertaining enough to offset the occasional lemon. Maybe this is the same way that the Asian American woman felt about Breakfast at Tiffany’s—that the Japanese caricature was unfortunate, but not to the extent that she would dismiss the whole film. The Japanese landlord Mr. Yunioshi was not the character she identified with; Holly Golightly was. In a similar case (but more tongue-in-cheek), John Cho’s character in Harold and Kumar Go to White Castle has no apologies about liking the film Sixteen Candles. With self-reflexive irony, Harold feels free to identify with the lovelorn teen leads instead of with Gedde Watanabe’s character Long Duk Dong.

I still can’t overlook Mickey Rooney’s scenes in Breakfast at Tiffany’s, but it’s easy for me to confront the racism in a film or show I’m not particularly fond of. It’s harder for me to deal with implied or suggested racism in the films and shows I do like. Do I bracket the unpleasant scene or character as an aberration? Or is that minor scene or character indicative of how the film really sees someone like me?

What are you willing to let slide in a film, and what are your deal-breakers?

Photo: Mickey Rooney as Mr. Yunioshi in Breakfast at Tiffany’s.