If you're an Asian American filmmaker and haven't heard of the Pusan International Film Festival, you need to get in on the action and head over to South Korea. 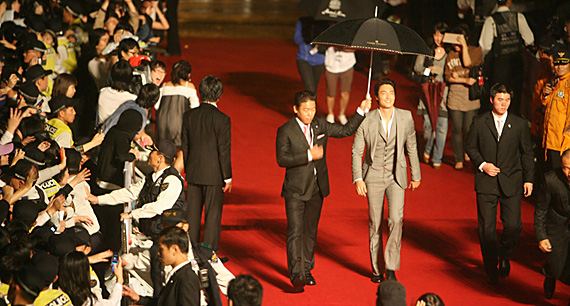 Taro Goto, the Festival’s Assistant Director, has been traveling to the Pusan International Film Festival for the last four years and after his last trip this past month he wanted to let Asian American Filmmakers know why they should go to Pusan.

If you haven’t heard already, the largest and most exciting film festival in Asia is the Pusan International Film Festival. In just its 12th year, PIFF has established itself as the hub of Asian cinema, positioning itself as a decidedly Asia-centric event. Whereas most world-class festivals depend on Hollywood star power, PIFF’s star wattage is all Asian. (Recent attendees include Jackie Chan, Andy Lau, Chang Chen, Takuya Kimura, Maggie Q and just about every Korean star.) Their affiliate programs, ranging from a star showcase to a pre-market for projects in development, all seek to provide a nexus for the Asian film industry. And the good news for Asian Americans? They’re invited to the party. 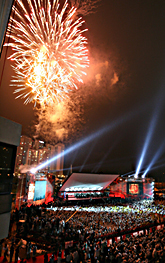 I first attended PIFF in 2004, by which time it had already developed into a large-scale event and supplanted the Hong Kong and Tokyo festivals as the one festival in Asia to mark on your calendar. Modeled after Cannes, PIFF centralized their screenings and events around a beach resort that was transformed into a veritable carnival where the film industry took meetings and fans snapped photos of stars. More importantly, they took a page from the Rotterdam festival’s CineMart—aco-production market where filmmakers pitch projects to producers, financers and distributors—and created their own pre-market called the Pusan Promotion Plan (PPP), while focusing on Asian-specific projects. Each year they bring in one or two projects from Asian American filmmakers, which in the past have included Joan Chen, So Yong Kim and Grace Lee.

In 2005, I noticed a large Asian American presence at PIFF that I didn’t observe the previous year. Ham Tran’s JOURNEY FROM THE FALL made its world premiere there, and Michael Kang (THE MOTEL), Georgia Lee (RED DOORS), Grace Lee (THE GRACE LEE PROJECT) and Mora Stephens (CONVENTIONEERS) each had their respective films in the official program as well. Whereas many Asian American films have a difficult time registering as more than a blip on the radar of most international film festivals, PIFF seemed to have a genuine interest in the works of overseas Asians.

It soon became clear that much of the interest was also driven by the necessity of the Korean film industry to seek inroads into new markets, particularly the United States, as the sizable Japanese market started to wane. Asian American filmmakers (starting with Korean Americans) were seen as a potential bridge towards crossover success. Suddenly, projects by Korean Americans were being greenlit by Korean production companies, resulting in Grace Lee’s AMERICAN ZOMBIE (iHQ), Gina Kim’s NEVER FOREVER (Now Film) and Michael Kang’s WEST 32ND (CJ Entertainment). Around the same time, the Korean Film Council (KOFIC) launched their Filmmakers Development Lab, annually giving five Korean American filmmakers an opportunity to incubate their projects with mentors and to take them to both the IFP Market in NY and PIFF. (CAAM is a partner on this program, by the way.) Early success will encourage them to expand the program to include all Asian Americans, I’m told.

Last year PIFF also inaugurated a program called Star Summit Asia, in which they showcase several up-and-coming Asian actors and promote them for possible co-productions across Asia. The first year they included Sung Kang, Will Yun Lee and Leonardo Nam, and this year they showcased John Cho. Outside of this program, Daniel Dae Kim, Grace Park and Jason Scott Lee attended the launch of the Asia Pacific Actors Network, which included a conference about the international casting of Asian actors.
It hasn’t quite happened yet, but the hope is that some of these Asian American actors will cross over in Asia.

What this all amounts to is that there’s a good amount of activity taking place in Asia right now, and that Asian Americans can get in on the action by heading to Pusan. If nothing else, there’s always great seafood washed down with soju. The next PIFF takes place in October 2008, hope to see you there!