Guest blogger Chihiro Wimbush writes about lights! camera! action! on the set of the upcoming FRUIT FLY: THE MUSICAL by filmmaker H.P. Mendoza. 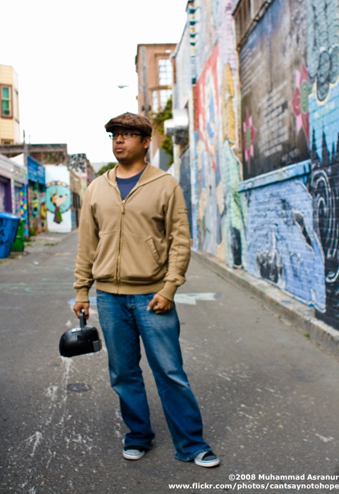 Director H.P. Mendoza on the set of FRUIT FLY with the omnipresent boombox.
Photo by Muhammad Asranur

FRUI T FLY, the new musical from H.P. Mendoza, is the third of a series of CAAM narrative feature productions and signifies an important new level of its support for Asian American cinema. Over the last year, CAAM has produced features by three Asian American directors in different stages of their careers: the return to Chinatown roots of veteran filmmaker (Wayne Wang’s PRINCESS OF NEBRASKA), a branching out for COLMA: THE MUSICAL director Richard Wong (OPTION 3) and now the directorial debut of COLMA: THE MUSICAL writer/composer/actor HP Mendoza. Each movie is different: an edgy drama, a moody psychological thriller and a moving comedic musical. CAAM is taking chances on directors taking risks, supporting them with resources that not only allow these pictures to be made, but also to be true to each director’s unique vision.

The challenges of making these kinds of independent Asian American films cannot be overstated. In particular, FRUIT FLY demanded large musical sequences, with an army of extras, all on a shoestring budget. It was amazing to see the incredible shorthand that has developed between Rich Wong, the director of photography on FRUIT FLY and HP Mendoza as director. On this, their third feature as a team (after COLMA and OPTION 3) they worked with incredible efficiency and speed – plowing through pages of script, blocking complicated musical numbers on the fly, finding the shortcuts that would save us time. 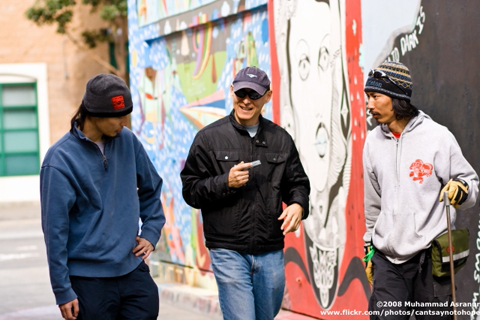 The shoot began on March 31 and ended a blistering 3 weeks later on April 20. Almost every scene was shot in San Francisco, much of it in the director’s own house which served as many of the numerous script locations. While the budget was tight, the schedule packed, the days long, and the nights unseasonably freezing, what stands out about the FRUIT FLY shoot is how engaged people were on every level on this film: from Don Young making it all happen as the producer to the many SFIAAFF staff and interns who served as enthusiastic production assistants, from the dedication of lead actress L.A. Renigen who was in nearly every scene, to the hundred extras waiting for hours to be called on and then delivering energetic supporting performances in our musical numbers. Everyone was passionate about contributing to this project, a testament to the creative vision and positive energy of H.P. Mendoza. Rarely seen without boombox in hand, H.P. spent hours coaching actors and extras through the lyrics, music and choreography of each musical number, playing the track of the day over and over again till every lip-synched line and every move was performed to his satisfaction.

Under normal circumstances, hearing any song fifty times in a day could drive one to purchase earplugs, but these particular numbers were ridiculously catchy. Crew would return home after a full day’s shooting with these tunes bouncing through their brains and many became active participants off camera in the musical sequences. It was this playful sense of humor and camaraderie with the talent that kept the atmosphere light despite the many pressures of such an ambitious shoot. One of our first-time actors shared that seeing the crew join in behind the camera really relaxed the performers, making them feel like “we’re all in it together.”

This video immortalizes some of these performances by the FRUIT FLY crew, along with other funny moments and behind-the-scenes footage, all set to the most ridiculously FRUIT FLY song, “Workshop.” Keep an eye out for the brief clip of our gaffer, Seng, and our AC, Chris, retreating through Clarion Alley as the actors advance toward them performing “Workshop.” Note that our crew guys are doing the same performance in reverse. It’s like the famous quote about Ginger Rodgers doing “everything Fred Astaire did, but backwards in high heels.” Try doing some of these moves backwards with a C-stand in your hand.

Chihiro Wimbush is an independent filmmaker and producer based in San Francisco. He has worked on three CAAM productions: as Production Manager for Wayne Wang’s THE PRINCESS OF NEBRASKA, Associate Producer for Richard Wong’s OPTION 3, and Co-Producer on H.P. Mendoza’s FRUIT FLY. Chihiro has directed his own short film, CROSS FADER which screened at this year’s San Francisco International Asian American Film Festival, and has just completed work as Co-Producer on the documentary short RED THREAD.