Well, kind of… I should explain. Since July 2007, WHATEVER IT TAKES has been supported by the Sundance Institute Documentary Fund. Besides CAAM, Sundance has been our other major backer, providing us with not only a large grant, but also much needed creative and technical assistance. 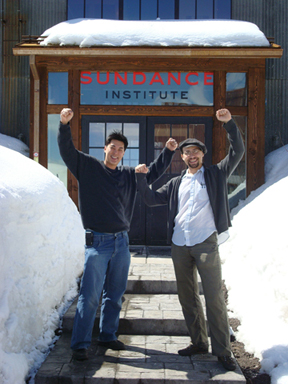 Well, kind of… I should explain. Since July 2007, WHATEVER IT TAKES has been supported by the Sundance Institute Documentary Fund. Besides CAAM, Sundance has been our other major backer, providing us with not only a large grant, but also much needed creative and technical assistance.

Last month, our contact at Sundance asked us if we’d be interested in doing a work-in-progress screening for the public in Park City. I said that we’d be honored, but I didn’t really think they’d choose us. After all, this is Sundance, so they must have 60 other projects that they are also representing.

Turns out they really loved our film, and we got invited to show about an hour’s worth of footage. As a bonus, they generously offered to fly out our two main characters from New York City – the school’s principal (Ed) and its star student (Sharifea). Ed was very happy to come out and present his vision of education; and Sharifea was very happy to take a day off from school!

Following a 10-hour drive the day before, my editor (Zeb Smith) and I rolled into Park City at noon on Wednesday, April 2nd. Surprisingly, there was tons of snow on the ground, which took this Los Angeles boy by surprise. We met my two doc subjects at the hotel, and then went to lunch with two Sundance representatives who were arranging the whole screening (Virginia and Irene). Super nice people.

After lunch, we went off to have our first press interview with PCTV, the local television station which does all the Sundance film festival interviews with directors, stars, etc… was really cool to be on the set – until I opened my big fat mouth. Without going into too much embarrassing detail, let’s just say I totally lost my train of thought during the first question (“tell us what your film is about…”) and rambled on without an apparent point for quite some time. My editor later told me that “it wasn’t the worst thing he’d ever seen…” Luckily, the director of the documentary program (Cara Mertes) was there to save me. The good news is that it was all much better from that point on…

At 5PM, we were whisked away to Main Street, where there was a small reception being held in our honor. The event was held at a really upscale jewelry store and was billed as a “Sundance Insider” event – which basically consisted of about fifty of Sundance’s major Utah supporters. Very cool to meet all the people there, and they were all quite excited about our film (even though they’d only read about it thus far). Appetizers looked quite yummy, but didn’t sample much for fear of interacting with potential donors with huge chunks of food in my teeth.

At 7PM, we all headed over to the Park City Library for the screening. We had done a sound check a few hours earlier and were pretty impressed with the library’s video/audio projection capabilities. Our MiniDV footage seemed to hold up pretty well when blown up to the big screen, but you could still tell that we hadn’t shot on HD. Audio was good since we had done a pretty decent sound design/edit session in los angeles.

When the screening started, there were about 100 people there – the number reached 150 by the end of the night, which definitely makes for our largest audience to date. Cara Mertes introduced me to the crowd, and basically let me have the floor for the next 7 minutes, as I talked about the genesis of the film, and introduced my editor and two main subjects in attendance. Turned out that the earlier PCTV flub had been really good preparation for public speaking, and I was pretty happy with my presentation.

The first clip played for almost half an hour, and I could already tell that the audience was into it. We had some good laughs and, let me tell you, there’s nothing like a good laugh from an audience to confirm an edit choice… After the first clip ended, i got back up on stage with Cara, and we had a more involved conversation with my editor and my two subjects. The school principal was very effective (as usual) and captivated the audience with his vision and fire. Sharifea, the student, was even more captivating when she read two of her poems; the latter, called “Pain”, was about suicidal thoughts and almost brought the house down. Very proud of her.

Then we showed the second clip. There were a lot of people crying in the audience – especially during a sequence where Sharifea’s mother describes how she (the mother) was addicted to drugs, beaten as a child, and now has trouble abusing her own children. The mother ends the sequence saying how “somebody has to break the vicious cycle…” with the implication being that Sharifea is the family’s only hope.

Following some pretty enthusiastic applause, we held an audience Q&A. Probably the best question was the person who said “How are you doing with funding?” That opened up the door for me to talk about our specific financial needs in order to finish the film. Turns out the person who asked the question was somebody who could actually give such an amount. She was from a socially conscious venture capital fund and came up to us afterwards saying extremely positive things. We’ve been in contact since then, and I hope to be able to report good things soon.

The screening night finished with Cara taking us all out for a late night dinner at a really expensive Italian place on main street. It’s not often that I’ve had the opportunity to order a $46 entree… but hey, you only live once, and I wasn’t paying! Had a great time debriefing about the event with Cara and the rest of my film “entourage”.

On the whole, the screening completely exceeded my expectations. Met a ton of great people who just might end up helping us finish this film. Got wonderful audience feedback on the cut, and definitely saw quite a few areas myself which need improvement (e.g. we have way too many “meeting” scenes!) Right now, I’m just feeling very motivated and empowered to complete this edit and get our film into the real world.