When I first brought my project, Among B-Boys, to CAAM as a Media Fund applicant, I did so with a feeling of entitlement. I was on a quest and I would not be denied: I needed funding, I deserved funding, like so many others, “this project HAD TO BE MADE”. 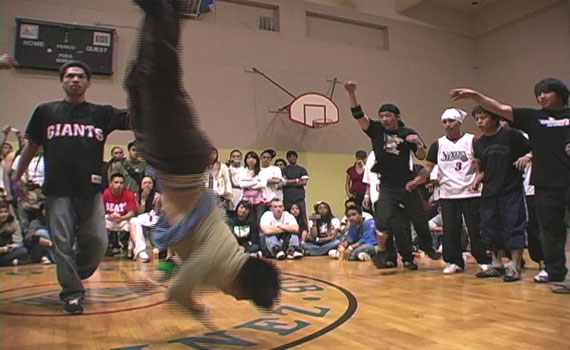 When I first brought my project, Among B-Boys, to CAAM as a Media Fund applicant, I did so with a feeling of entitlement. I was on a quest and I would not be denied: I needed funding, I deserved funding, like so many others, “this project HAD TO BE MADE”. I felt that I had a good project… no, a great project that I was working on. I thought that because my topic was FRESH (in so many ways!), that it was visually exciting, that all the Asian American studies people would be intellectually tickled so, the film would wrap in great success and we would rap and dance and screen and roll around the country in a blaze of glory!

It was validated by good screenings as a short film in the Los Angeles, San Francisco, New York, San Diego, and Chicago, Asian American Film Festivals. But as a short film I was able to barely touch on the existence of these Hmong youth, the B-Boying/breaking (you might know it as “breakdancing”) that they love, and some of the challenges they face, despite of and because of being Hmong and being B-Boys. There were real stories that needed to be documented further and I felt like I was the right person to do so, if not for the sole reason that I was the first.

Once I got word that I was accepted to the James T. Yee mentorship award (now fellowship), though, I was excited and nervous, and soon was hit with the realities of what it would take to make this film a success. Being someone who likes to act as a “jack of all trades” trying my hand at everything, it’s been a humbling process to say the least. Funny enough, it’s just like B-Boying – you always need a good crew to have your back. So at this time, I found my solo act to be a little out of my league. Like a lone B-Boy, you can take on the small fries on your own, but if you have aspirations toward taking the national stage you need the right people to help you to the next level. Having a good diverse crew will not only cover your deficits, but also enhance your strengths. In both B-Boying and filmmaking, I think you have your “blow-ups”, your flashy tricks to excite the crowd… but in order to gain recognition, you need to have some foundations, you have to hit the beats and dance, and build on top of it. And if you’re not good at one or the other you need people in your crew who are.

One of the roles of mentorship that I needed for my project was to help identify not only what aspects of my production need work, but also identifying what aspects of production exist that I didn’t know about. Not having been through film school or having extensive film production experience, I brashly bum-rushed this production without knowing about raising money, budgeting, planning shoots, call sheets, and many other aspects that would help push this up the next level from “hobbiest” to “professional”. In order to address all the needs that I had though, I found that because even mentors have their own strengths and weaknesses, it was best to learn about these different aspects of production from different people! In my search for answers, it’s almost like the answer to every answer is a new question, at the end of every quest is a new one for me to undertake…