Off the Menu: Asian America is available on DVD from the PBS online shop.

What exactly does food reflect about Asian Pacific Americans? Off the Menu: Asian America grapples with how family, tradition, faith, and geography shape our relationship to food. The program takes audiences on a journey from Texas to New York and from Wisconsin to Hawaii using our obsession with food as a launching point to delve into a wealth of stories, traditions, and unexpected characters that help nourish this nation of immigrants.

Off the Menu is a roadtrip into the kitchens, factories, temples and farms of Asian Pacific America that explores how our relationship to food reflects our evolving community. The feature documentary is a one-hour PBS primetime special by award-winning filmmaker Grace Lee (American Revolutionary: The Evolution of Grace Lee Boggs) co-produced by the Center for Asian American Media and KQED, with funding provided by the Corporation for Public Broadcasting. Accompanying the documentary is web content with stories about Asian Americans and food. 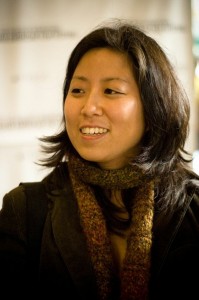 Grace Lee directed the documentary American Revolutionary: The Evolution of Grace Lee Boggs, which The Hollywood Reporter called ”an entertainingly revealing portrait of the power of a single individual to effect change.” The film premiered at the 2013 Los Angeles Film Festival where it won its first of six festival audience awards before its broadcast on the PBS series POV. Her previous documentary The Grace Lee Project won multiple awards, broadcast on Sundance Channel and was called “ridiculously entertaining” by New York Magazine and “ a funny but complex meditation on identity and cultural expectation,” by Variety.

Other directing credits include the feature film Janeane From Des Moines, which premiered at the 2012 Toronto Film Festival as well as American Zombie, which premiered at Slamdance and is distributed by Cinema Libre. Grace received her MFA in Film Directing from UCLA Film School where her short film Barrier Device, starring Sandra Oh, won a Student Academy Award. Grace returns to her alma mater and other universities frequently as a guest speaker and lecturer. She has served on many panels including the Independent Spirit Awards, POV’s EdComm and the International Documentary Association. Most recently, she produced and directed two documentaries for PBS’ Makers: Women in Politics and Off the Menu: Asian America. She lives in Los Angeles.

Tina Nguyen is a documentary editor based in Los Angeles. She worked on the feature documentary Fed Up, which premiered at Sundance and was released theatrically in 2014. She edited and co-produced Seeking Asian Female (Dir. Debbie Lum), which premiered at SXSW in 2012 and was broadcast by PBS as part of the “Independent Lens” showcase in May 2013. Her additional credits include the feature documentaries Holy Wars and Bilalian, which won awards while on the festival circuit, and the upcoming films Breathin’: The Eddy Zheng Story and Out Run.

Quyen Tran is an award winning cinematographer based in Los Angeles. Beginning her career as a stills photographer, her work has been published in numerous magazines and newspapers including the New York Times, USA Today, and Scientific American. A graduate of UCLA’s School of Theater, Film and Television, her films have screened at Telluride, Sundance, Tribeca, Festroia and Toronto. Her most recent short, Smilf, won best U.S. Fiction Short at Sundance 2015. Off the Menu is her second collaboration with director Grace Lee, first partnering together on American Revolutionary: The Evolution of Grace Lee Boggs.

Multi-award winning composer Ceiri Torjussen’s music was described by the Los Angeles Times as “a sudden bolt of creative lightning.” Welsh-born but based in Los Angeles, his credits run the gamut of independent films, documentaries, network TV, animation and large-budget studio films. Recent projects include The Canal, premiering at Tribeca 2014, and Big Ass Spider. He composed additional music for Repo Man, Live Free or Die and Underworld Evolution. An accomplished composer of concert music, he has been commissioned by groups such as the BBC National Orchestra of Wales, The Vale of Glamorgan Festival and the Henry Mancini Institute. His work has been recorded and released commercially and performed worldwide, including the USA, UK, Germany, France and India.

KQED, the public media organization serving Northern California,  is for everyone who wants to be more. Our television, radio, digital media and educational services change lives for the better and help individuals and communities achieve their full potential. KQED serves the people of Northern California with a community-supported alternative to commercial media. We provide citizens with the knowledge they need to make informed decisions; convene community dialogue; bring the arts to everyone; and engage audiences to share their stories. We help students and teachers thrive in 21st century classrooms, and take people of all ages on journeys of exploration-exposing them to new people, places and ideas.

Off the Menu: Asian America
A film by Grace Lee, co-produced by the Center for Asian American Media and KQED with support from the Corporation for Public Broadcasting. Coming December 2015 to PBS. (April, 2015)

Glen Gondo is dubbed the “sushi king” of Texas.

Women from the Oak Creek, Wisconsin gurdwara prepare for langar, the community meal at the Sikh temple.

The Kawelos in Hawai’i use traditional Native Hawaiian food practices, such as spearing for octopus.

Chinese Food and the Joy of Inauthentic Cooking (New Yorker)

Interview with Grace Lee, Director of ‘Off the Menu: Asian America‘ (KQED)

Off the Menu: Asian America, a Documentary by Grace Lee (KCRW’s Good Food)

Off The Menu: Realness Is A Matter Of Taste (NPR)

This program is a co-production of CAAM and KQED with Director Grace Lee. Funding is provided by the Corporation for Public Broadcasting.