Our 2017 honorees draw upon the deep history of food activism in the Bay Area, reimagining not only what we eat but also bringing to light the complex rituals, history and barriers that comprise our diverse cultural practices and current food system. Through community meals and workforce development, their work lifts up the Asian American community and beyond, providing pathways toward more just and equitable foodways.

VIP Tickets are Sold Out!
Online ticket sales are now closed. There are a few remaining general admission tickets for $200 that will be available for purchase at the door. 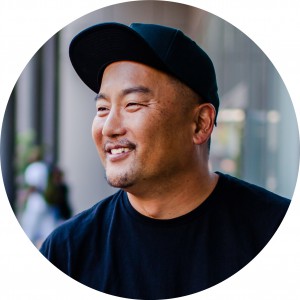 Born in Seoul, Korea and raised in Los Angeles, California, Roy Choi is a graduate of the Culinary Institute of America and later worked at the internationally acclaimed Le Bernardin. In 2010, Food and Wine named him Best New Chef. Most recently, he was included in the 2016 TIME 100 Most Influential People in the World list. Roy resides in Los Angeles where he is the co-owner, co-founder, and chef of Kogi BBQ, Chego!, A-Frame, Commissary, POT and LocoL. kogibbq.com Photo credit Travis Jensen. 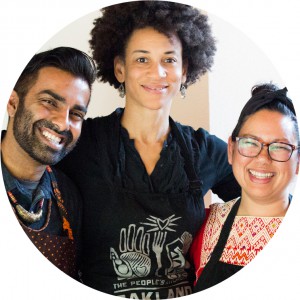 The People’s Kitchen Collective (PKC) works at the intersection of art and activism as a food-centered political education project and cooperative business. Based in Oakland, California, their creative practices reflect the diverse histories and background of collective members Sita Kuratomi Bhaumik, Jocelyn Jackson and Saqib Keval. Written in their family’s recipes are the maps of their migrations and the stories of their resilience. It is from this foundation that they create immersive experiences that celebrate centuries of shared struggle. peopleskitchencollective.com Pictured from l to r, Saqib Keval, Jocelyn Jackson and Sita Kuratomi Bhaumik. Photo credit Tina Case.

Sita Kuratomi Bhaumik is an artist, chef, writer and educator who tells the stories of our migration through food. Raised in Los Angeles and based in Oakland, she is Indian and Japanese Colombian American. Sita holds a B.A. in Studio Art from Scripps College, an M.F.A. in interdisciplinary art and an M.A. in Visual and Critical Studies from California College of the Arts (CCA). Sita has worked with institutions such as the Smithsonian APA Center, Yerba Buena Center for the Arts, The Asian Art Museum of San Francisco, The San Jose Museum of Art, SomArts, 826 Valencia, Southern Exposure, Stanford University, Shankhill Castle in Ireland and the Future Food House in Holland. She has taught at Rayko Photo Center, University of California at Merced and CCA. Committed to diversity in the arts, Sita has been the art features editor for Hyphen magazine and is a Programming Advisor for Kearny Street Workshop. sitabhaumik.com

Jocelyn Jackson’s passion for seasonal food, social justice, creativity and community is rooted in a childhood spent on the Kansas plains. Her family would sing a song before sharing a soulful meal. Since then, Jocelyn has practiced law, taught environmental science and ethics, become a yoga instructor and created performance and visual art. Her inspiring international experiences include serving in the Peace Corps in West Africa and teaching in an ecovillage in Southern India. Jocelyn has presented on the principles of community nourishment at Court Bouillon in Southern France and back home in Oakland for the Fusion of Food and Yoga series at Anasa Yoga. She enjoys collaborating with a wide range of wonderful people and organizations including People’s Community Market, BALLE, Bryant Terry, Life is Living, Impact HUB Oakland, MOAD, Kitchen Table Advisors, NUMI Tea, YES! and Late Nite Art. She is beginning her fourth year of full hearted cooking. Jocelyn founded JUSTUS KITCHEN to continue to create food experiences that inspire people to reconnect with themselves, the earth and one another. And she still begins every meal with a song. justuskitchen.com

Saqib Keval learned the importance of food from his grandmother’s hands. Today, he is a chef and community organizer who imagines and supports new food systems. With revolutionary love from the kitchen to the streets, Saqib’s experience is rooted in social justice movement building and political education. Saqib started the People’s Kitchen in 2007 as a grassroots organizing project and alternative restaurant model to fine-dining restaurant culture. He trained as a chef in Aix-en-Provence, France and has helped open and manage restaurants throughout California. Saqib is a community organizer with a long history of intersectional grassroots organizing. Working deeply in the food justice field, Saqib spent three years with groundbreaking food justice organization People’s Grocery. He developed and managed the social enterprise incubator program and food justice fellowship. Most recently, Saqib worked with The Restaurant Opportunities Center as the national manager of the COLORS restaurants located in Detroit and NYC. Focused on decolonization through food, he has presented his work at Stanford University, The University of Oregon, UC Davis and UC Berkeley and York University in Toronto. saqibkeval.com

ASIAN CHEFS ASSOCIATION
The Asian Chefs Association (ACA) was founded in 2002 to “grow a community of culinary professionals to advance and elevate the art of Asian cooking.” One part professional association, one part advocacy group, ACA provided a platform for Asian American chefs to share ideas and promote new projects and career opportunities. They launched the Taste of Asia dinner series that highlighted different regional cuisines and local chefs, predating the popularity of food festivals and night markets to which CAAMFeast is indebted. Chef’s Khai Duong, Lawrence Chu and Chris Yeo were among the ACA’s chief architects and key to the organization’s strong community ethos. Infusing culinary training with a deep understanding and love for the community, ACA pioneered community meals through their Chef’s Without Borders series, providing hot meals to houseless communities alongside partners like Glide Memorial and CAAM.

Khai Duong is an accomplished chef who graduated first in his class from renowned Le Cordon Bleu in Paris, Duong is an icon in the Vietnamese culinary world. Perhaps best known as chef-owner of San Francisco’s beloved Ana Mandara restaurant (which closed in 2012) – Chef Duong recently opened Khai, an upscale Vietnamese restaurant where he serves a 10-course tasting menu. On a mission to promote modern Vietnamese cooking and further its place in the culinary world, Duong wants to inspire a new generation of young chefs to push beyond the boundaries of traditional Vietnamese cuisine.

In June 2012, he won the gold medal at the International Beijing Culinary competition, beating 200 other chefs for the title. Duong has spent the last few years learning new cooking techniques in Vietnam, serving as head judge on “Iron Chef Vietnam, ” and supporting a cooking school in Ho Chi Minh City designed to help girls and women who were victims of the sex trade. Duong has long been passionate about community service. For years he led the Asian Chefs Association — an organization he co-founded to raise funds for causes like Chefs Without Borders, and he spearheaded an annual holiday meal service for thousands of homeless through San Francisco’s Glide Memorial Church. CAAMFeast alumni honoree chef Martin Yan said of Duong: “He is one of the most creative, most talented Vietnamese chefs alive today. He is a culinary artist.” chefkhai.com

Chris Yeo grew up in Singapore and moved to London in 1975, attending Vidal Sassoon Academy. He immigrated to San Francisco in 1980, opening Yeo’s Hair Design in the Haight and Ashbury neighborhood in 1981. “And I realized I missed the food, Singapore food. So I decided to open a little restaurant,’ Yeo explains. The only problem was the chef he hired from Singapore was ill-suited. “So I decided that the only way to make this work is, I have to cook.” Yeo’s Straits Restaurants specializes in Singaporean cuisine with locations in San Jose, Burlingame —both in California–and Houston, Texas. while Sino in San Jose is a modern Chinese and Dim Sum Lounge. He then opened Roots & Rye in 2015, a gastro-lounge and whisky bar. rootsandrye.com