As I was reading Constance Wu’s book, Making a Scene, for this month’s edition of Short Takes, there was a particular section that stuck with me. Wu talks about the criticism she faced joining the cast of Fresh Off the Boat and taking on the role of Jessica Huang, a character that many thought played into the stereotype of an “Asian tiger mom.”

“There are real people who genuinely embody stereotypical attributes – they’re our mothers and fathers, our uncles and aunts, our brainy cousins – I don’t want to hide their voices or their stories. They are human too,” Wu writes. “Stereotypes are not harmful for their mere existence; they’re harmful for their reduction of a person or group.”

I think that last element is key – stereotypes become damaging when they diminish their subjects to something less than what they really are. There are still actively harmful stereotypes about Asians and Asian Americans perpetuated by the media, like the “Dragon Lady” stereotype highlighted in Meghan Markle’s latest podcast episode. And then there are the trailblazing Asians and Asian Americans who are leaning into their own cultures while still owning their own narratives, from Rina Sawayama who recently dropped her new album Hold the Girl, to Sheng Wang who just put out his first Netflix comedy special.

See below for four recommendations to check out this month.

Rina Sawayama is an artist who has been on my radar for several years now – and if she’s not on yours yet, she should be! Her debut album SAWAYAMA was easily one of my favorite albums of 2020, a collection of certified bops and colorful tracks with tinges of ‘90s pop, R&B and even heavy metal. And though she boasts a magnetic diva stage presence, killer dance moves and powerhouse vocals, Sawayama is certainly not your average pop star. Her metal-infused track “STFU!” served as her response to the many microaggressions and anti-Japanese comments she has endured throughout her life, while her catchy song “XS” is an anti-capitalist anthem mocking hyper consumption in a world plagued by climate change and pollution. She delivers meaningful messages in her music, unafraid to touch on social commentary while belting out consistently catchy hooks.

It’s all of these reasons why I was so excited for her latest album, Hold the Girl., which feels decidedly more introspective and toned down than her previous album, showing Sawayama grappling with ideas of forgiveness, self-sabotage and familial relationships. The 32-year old Japanese-British musician revealed in a Pitchfork interview that the album is about “reparenting yourself” and that theme runs throughout the record. Sawayama’s song “Catch Me in the Air” shares her appreciation for her single immigrant mother, while her song “Send My Love To John” is written from the perspective of an immigrant mother apologizing to her queer son for not accepting him fully. I really enjoyed listening to Hold the Girl, especially after taking the time to really sit with Sawayama’s storytelling and artistry that continues to unfold.

I can’t remember the last time I devoured a book as quickly as I did reading Making a Scene this month. Penned by Fresh Off the Boat and Crazy Rich Asians star Constance Wu, the book houses a collection of poignant and heartfelt essays detailing everything from the actress’s upbringing in the suburbs of Richmond, Virginia to her experiences trying to “make it” in Hollywood. She also delves into some heavy subject matters and trauma from her own life, describing incidents of sexual harassment and opening up about her suicide attempt after the widely publicized backlash she faced in 2019, when she expressed frustration over news that Fresh Off the Boat was being renewed for a sixth season.

Chapters are arranged in seemingly no particular order, with reflections and musings about her life riddled in every section. In the introduction of the book, Wu says she was taught as a child to never “make scenes” – that it was too intense, unladylike. She explains that acting was one of the only venues where it felt it was truly acceptable to have “big feelings.” Throughout the course of the book, Wu provides added context to both her personal life and her acting career that blossomed since her childhood.

In Making A Scene, Wu writes with a level of candor and self-reflection that you wouldn’t expect from an actress of her stature. Rather than shy away from parts of herself that might seem like “too much,” she chooses to lean in. She reflects on feelings of jealousy and manipulation, admits to acting “mean and controlling” to her younger sister growing up and describes some of her behaviors as “cringeworthy and obnoxious.” It felt refreshing to read Wu’s writings, almost like stumbling upon pages of a diary you were never supposed to find. I found myself empathizing with Wu with each page turn, even at times when Wu didn’t come off in the best light. Making A Scene is a powerfully written book that feels personal and raw. Wu feels like a real person – with flaws and insecurities and pain, just like the rest of us.

When a comedian is endorsed by comedy legend Ali Wong herself, you know it’s going to be good. Sheng Wang: Sweet and Juicy marks Wang’s debut Netflix special, and Wong’s directorial debut.

Wang tackles a wide range of topics in his hour-long comedy routine, humorously recounting experiences from his life like attending the same middle school as Beyoncé, accompanying his girlfriend to a mammogram exam and shopping at Costco. Toward the end of the special, he also expresses appreciation for his immigrant parents, quipping that he doesn’t know if would have had the courage to leave his home if he was in his parents’ shoes. “You leave your family, your friends, your community. You leave everything that you are familiar with. You move to a completely foreign country where you don’t speak the language, just so your offspring have more opportunities.” Wang says. “And then your kid goes into stand-up comedy.”

I really appreciated the delivery and set up Wang takes with his storytelling and jokes. In many ways, his comedy seemed effortless; he never felt the need to resort to over-the-top facial expression or vulgar language to make his audience laugh. Rather, he delivers jokes in a way that one of your best friends might, with a down-to-earth tone and a level of relatability. As far as comics go, he’s definitely one I’ll be watching. 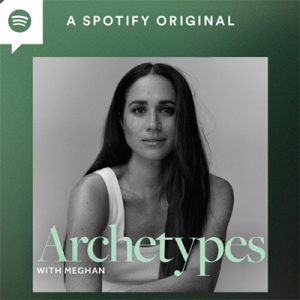 In the latest episode of Meghan Markle’s podcast Archetypes, Markle explores the many archetypes that attempt to limit and define Asian and Asian American women. Through conversations with acclaimed actress Margaret Cho and award-winning broadcast journalist Lisa Ling, Meghan dives into how the media has often presented women of Asian descent as caricatures. You’ve seen them before: the oversexualized, “exotic” Asian woman or the aggressive, threatening Asian woman.

The episode specifically breaks down the origins of the “Dragon Lady” archetype. “Dragon Lady really comes from this sort of fantasy of orientalism,” Cho explains. “It’s so pinned to this idea that Asianness is an inherent threat, that our foreignness is somehow gonna get you. The mystery and the exoticism of it is part of it and unfortunately that trope has really stuck to film but also to Asian American women or Asian women.”

In addition to providing necessary context about the “Dragon Lady” archetype, the podcast also examines how stereotypes like these have seeped into popular culture – and how these harmful characterizations have affected Asian and Asian American women to this day, including household names like Margaret Cho and Lisa Ling.

While the episode just scratches the surface of the many stereotypes and harmful narratives faced by Asians and Asian Americans, I enjoyed the podcast and did spend time reflecting on it afterwards. It was heartbreaking hearing about the roadblocks both Cho and Ling faced in their careers due to their Asian American backgrounds. But I also felt encouraged learning about the ways these two women have worked to fight against these harmful narratives and create their own success.

Interested in other recommendations? Check out our Short Takes archive for more fresh shows, music, and reads!

Madeleine Fernando is a second-generation Asian American writer based out of New York City. A graduate of Northwestern University’s Medill School of Journalism, she is currently a public relations specialist and freelance writer.