In February, many Asian Americans gathered together to celebrate Lunar New Year for the first time in two years. However, the excitement and festivity were also tempered by the recent violent killings of two Asian American women: Michelle Go and Christina Yuna Lee. This tension between celebration and struggle is a theme that runs through many of the works highlighted in this month’s edition of Short Takes.

Below we take a look at five creative works featuring Asian Americans – from Mitski’s long-awaited album Laurel Hell to Wajahat Ali’s touching memoir about living in America as a Muslim American.

Mitski fans rejoiced this month when Laurel Hell released earlier this month after Mitski’s two-year hiatus. The album has already seen much success, with NME reporting that Laurel Hell was the best-selling album in America in its first week of release.

Mitski has become somewhat of an icon in the music industry over the years, praised for her raw emotion and nuanced songwriting. The Japanese-American singer-songwriter has been known to put her anxieties and heartache on full display through her music, and Laurel Hell is no different.

Laurel Hell is a masterclass in lyricism that truly shows everything Mitski is capable of as an artist. One track titled “Working For The Knife” explores the oppressive reality of creating art under the confines of capitalism, while another track titled “Should’ve Been Me” centers on Mitski’s feelings of loneliness and longing after the ending of a relationship. Mitski’s lyrics are unfiltered and feel gut-wrenchingly real in their honesty and authenticity. For longtime fans and Mitski newcomers alike, Laurel Hell is an album that does not disappoint.

Ali Wong is back in all her glory in her newest comedy special, Ali Wong: Don Wong, which dropped on Netflix just in time for Valentine’s Day. The special is refreshingly intimate, hilarious and often crude, in all of the ways we’ve come to expect from the fearless Ali Wong.

In Ali Wong: Don Wong, the Asian American comedian tackles a range of topics that are often deemed taboo – from her experience getting a colonoscopy to her ongoing desire to cheat on her husband. Wong is unafraid of confronting, in detail, the double standards often faced by female comedians, mothers and women overall.

“I don’t just want equal pay, I want equal pleasure,” Ali Wong says at one point during the special. “But it would be very threatening if all women wanted and felt like they deserved that, because then a bunch of women wouldn’t be available to [help] their husbands make their lives as easy as possible.”

In a departure from her past Netflix specials, Wong also explores material about her growing fame and wealth, and she embraces her authority as a powerful, successful woman. Though sometimes these jokes may be less relatable for fans (at one point she mentions only checking her Instagram DMs to see if Hello Kitty has offered her a brand sponsorship), it felt refreshing to watch Ali Wong owning her success in its entirety. Ali Wong is a comedian who knows who is, and she doesn’t shy away from everything that makes her brilliant.

Take Out with Lisa Ling

One new TV show to have on your radar is Take Out with Lisa Ling, a new HBO show that shines a light on Asian cuisines and the important ways Asian Americans have contributed to the United States through food. The host of the show is Lisa Ling, an award-winning journalist whose own family story began in a Chinese restaurant in Sacramento, California.

Each episode of Take Out with Lisa Ling explores different cuisines that Asian immigrants brought to the United States. Over the course of six episodes, viewers learn about Filipino food in Louisiana, Chinese cuisine in Sacramento, Vietnamese dishes in southern California’s Little Saigon, Bangladeshi food in New York, Japanese cuisine in LA’s Boyle Heights and Korean food in Virginia.

Though much of the food on screen is sure to leave your mouth watering, Take Out with Lisa Ling is about a whole lot more than just food. Rather, food is used as a vehicle to examine the complex and often misunderstood history of Asian Americans. Whether you’re a food lover or simply want to understand more about Asian American history through the lens of delicious cuisines, you’re sure to find something to love with Take Out with Lisa Ling.

Go Back to Where You Came From: And Other Helpful Recommendations on How to Become American, Written by Wajahat Ali 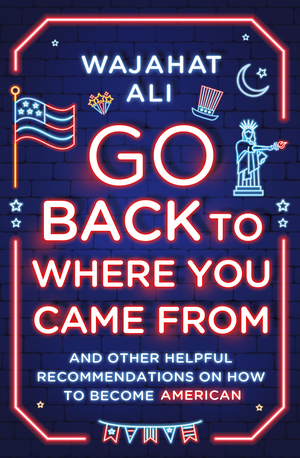 One of my favorite reads I’ve picked up in the new year is Wajahat Ali’s witty, deeply personal memoir titled Go Back to Where You Came From: And Other Helpful Recommendations on How to Become American.

In his memoir, Ali recounts growing up in the 1980s and 1990s Bay Area as the son of two Pakistani immigrants. He stayed local for college, choosing to study English at the University of California, Berkeley. It was during this time that Ali’s life changed forever following the tragedies of 9/11. Ali found himself as an unexpected spokesperson for his Muslim community as he navigated Islamophobia and racism that continued to plague the country.

In Go Back to Where You Came From, Ali touches on some of our nation’s most pressing issues – Islamophobia, white supremacy, immigration, systemic racism and more – while weaving in well-researched historical context, his own personal experiences and his distinct sharp-witted humor and commentary. Ali’s memoir is an incredible roller coaster of emotions and a nuanced, vulnerable look at the life of a first-generation American Muslim. Ali is bold and critical with his observations, yet hopeful for a more compassionate and inclusive America of tomorrow.

What My Bones Know: A Memoir of Healing from Complex Trauma, Written by Stephanie Foo 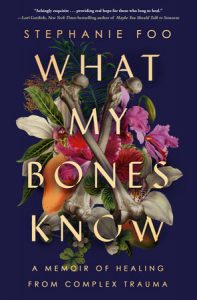 Released on February 22, What My Bones Know is a powerful memoir penned by Malaysia-born Stephanie Foo, an award-winning radio journalist who previously worked on This American Life.

As a child, Foo experienced years of physical and verbal abuse and neglect from her parents before she was abandoned as a teenager. Foo’s tragic upbringing ultimately found its way into her adulthood as well, as Foo found herself struggling with panic attacks, severe anxiety and self doubt. Foo was diagnosed with complex PTSD – a condition that occurs when trauma happens continuously over the course of years.

Finding few resources on her condition, Foo decided to seek out answers on her own and the result is an extremely moving and vulnerable piece of work. Foo’s journalistic background is made clear in this memoir, as she incorporates interviews with scientists and psychologists mixed in with her personal experiences. Part memoir and part investigative journalism, What My Bones Know explores the effects of immigrant trauma on the community and how trauma can be inherited through generations. Though it explores many heavy themes, the memoir is also a story of great resilience and hope – and how Foo ultimately was able to reclaim agency from her trauma.

Have ideas on what we should be watching next? Share on social media and tag #CAAMShortTakes.