"SIT perfectly blends a meditation on Buddhism and also the poignancy of family and making a life in the world."

The first screeners I watched this year were for the shorts program IMMEDIATE FAMILY, filled with memorable and heartfelt works. I highly recommend it! One of my favorites was SIT by director Yoko Okumura and producer Christopher Ruiz. The film opens with Yoko’s father, a Zen priest in Indiana, describing zazen as he is seen sitting facing a wall, and her mother describing kakyushi, a devotional sewing practice. Her father says jokingly that her mother was “kind of a strange person” to get interested in a Buddhist priest like him. Okumura then shifts to a scene of her brother Masaki, also sitting with back to camera, facing a video game, as he describes his detachment from Buddhism…and life in general. SIT perfectly blends a meditation on Buddhism and also the poignancy of family and making a life in the world. Okumura answered a few questions by email. (The interview has been edited lightly for clarity.)

RC:  This film really was a departure from KIMI KABUKI, which I saw at CAAMFest 2016!  First let me ask you where that previous film came from?

SIT is a film that I started filming exactly 10 years ago while still an undergraduate student at CalArts back in 2007. It was a very different iteration but that’s how long I have been shooting my family and trying to figure out what a film about them could be about. The newest iteration of SIT, the one you watched, is a film we started to shoot in 2012. But between the time we started to shoot SIT and finished SIT I went to grad school and grew into a different filmmaker. So in a way SIT is the old me and KIMI is the new me, but SIT had to be finished after KIMI.

I guess what still connects these two films is that a big theme of both is communication.

RC:  SIT, deals with desire in a different way than KIMI KABUKI, but also family. Why did you decide to make a film about your family?

Honestly at the very beginning it was purely accessibility. I think many filmmakers start their creative journeys just by exploring what is close to them, especially their families and that’s where I started too. My interest in filmmaking started when I was 10, just making home videos so I guess it was a natural progression to continue filming those around me.

RC:  I really appreciated your portrayal of Buddhism, and also how you juxtapose the philosophy with the reality of family relationships and actually living life in the real world. Have you always been curious about this interplay, or did this come up as you were making the film?

This interplay definitely came up because we were making the film. Originally the story was only going to focus on my Dad but soon it was pointed out to me by my cinematographer that there seems to be no visible conflict within a story purely about a man who is already happily living his path. Only when we decided to shift narratively toward Masaki, who hadn’t found his path yet, did we realize their juxtaposition was our film. 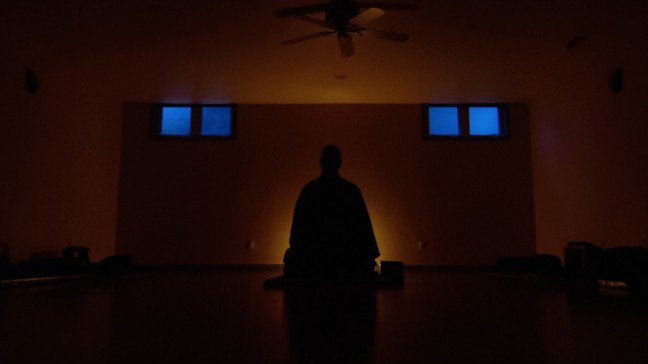 RC:  I think many viewers will find resonance with their own families. We certainly feel the love and connection between you, but there are also hints of disconnection, of failure to communicate.  The Asian father is not simply distant and stoic – he’s an actual Zen priest!

I think even if an Asian father is indeed distant and stoic, there’s still so many different variations of how those qualities actually manifest. He is certainly not close or gregarious in a western way, but he is very humorous and human and I wouldn’t have it any other way. People say distant and stoic like it’s a bad thing that comes with nothing else that’s good. It’s a very western judgment on these qualities that I don’t particularly relate to. If he was all of a sudden very emotive and chatty it would probably make me uncomfortable. But maybe that just means I’m actually pretty Japanese and lack the Western preferences that value outgoing people and devalue ones who keep to themselves.

RC:  How do you think your family’s Buddhism has affected you, growing up in the Midwest?

We moved from Kyoto to Minneapolis when I was five and I was raised there. Buddhism was always around me in a cultural way for obvious reasons but actual theology and spiritually of Buddhism was not something my parents tried to impose upon us. I actually had a lot more exposure to Christianity through attending Christmas services with family friends. In fact I don’t think I had had a single conversation about Buddhism with my parents until I started making this film. I believe my parents didn’t want to force anything on us, knowing that we would find our own paths on our own time. Just like it is shown in the film.

RC:  You’ve lived in Japan and several places in the U.S. You also have a unique kind of family, in terms of religious involvement, though it sounds like your parents purposefully didn’t impose those beliefs on you. How would you say navigating those different worlds affects your filmmaking, if at all, or informs your perspectives as an Asian American?

My background having been born in Japan and raised in the US is only just now starting to come to the surface of my filmmaking. Through all my schooling I just went with my gut and was not particularly thoughtful about my work in a cultural context. I don’t know if it’s these times or if it’s me maturing, but now it’s hard not to evaluate my works implication on representation, diversity, intersectionality and inclusivity. I’m only recently understanding how different it is to be Asian from Asia and to be Asian American. As someone who moved here at five, I feel I have been both.  I’m still in the early stages of figuring out what that means for me as a story teller.

RC:  I think many Asian American children complain that their parents are too overbearing. There’s too much pressure to go to an Ivy League college, or become a doctor, lawyer or engineer. Your film and family exhibit the opposite problem. Your parents seem to give you so much room to choose your own paths that you’re left “without expectations”. It’s like the polar opposite of Tiger Parenting – Zen Parenting! Did your film lead to conversations in your family about this or other issues?  How did they all receive SIT?

We did not have any conversations about parenting within any Asian paradigm. I think we are just one family within a vast spectrum of families. There are plenty of Japanese Zen families who have very high expectations of succession (that the son will take over the father’s role as the abbot of a temple) so being Asian or being Buddhists to me at least isn’t what makes our family, our family. For me the reason why my parents, especially my Dad is so lax, is because his father had expectations of him to become a business man and was slow at accepting his choice of becoming a monk. He didn’t want his children to feel that kind of negative pressure. I think it’s actually a pretty universal story.

RC:  I think it speaks volumes of why your dad comes across as so appealing. Actually everyone in your family is appealing. There is something universal here, though it’s obviously very specific at the same time. What are your next projects? And how is your brother doing?

I am working on my narrative feature film debut. My producer and I are currently financing for a script I wrote called “The Religion of Girlfriends”, which is a late 90’s teen thriller about a punk teen girl who becomes wrapped up in the occult when her Buddhist priest father forces her to move to a small rural town. It may sound familiar, but it is very much fiction. I am also developing a TV pilot about a family of Asian American women living in Los Angeles and dealing with the matriarch’s late in life decision to become pregnant again.

Masaki is doing great. He is attending culinary school while working part time at a restaurant. He will graduate in April and plans to continuing work there for a little while before returning to the US.