"They expect the classic competition film where you’re rooting for this underdog or you’re rooting for someone to win....But our film goes against that grain. It’s about what happens after he gets his 15 minutes of fame and after he is the champion."

The documentary Who is Arthur Chu? opens with Chu’s whirlwind Jeopardy! run in 2014, which propelled him to notoriety. The Ohio resident racked up nearly $300,000 in winnings and created an online hate-storm for his aggressive playing style. He bounced around the board in search of daily doubles, made pragmatic wagers, and tangled with host Alex Trebek. Detractors took to Twitter, dubbing him the “Jeopardy Villain” and tweeting racist insults at him. But Chu brushed it off, engaging with his haters online, and gaining followers.

After his 15 minutes of fame, Chu wasn’t content to return to his life as an insurance compliance analyst. Instead, he leveraged his time in the spotlight into writing and speaking gigs, commenting on issues of racism, and sexism in nerd culture. He wrote about his immigrant family, toxic masculinity in the Isla Vista massacre, and the misogyny of #Gamergate.

As Chu’s profile rose in the public eye, he reflected on an upbringing that made him feel angry and isolated, and wrestled with his own private relationships.

An intimate portrait of a complicated young man searching for meaning, Who is Arthur Chu? explores the struggles of being an outsider in one’s own country. The documentary, which premiered at Slamdance in January, is the first feature film by Yu Gu and Scott Drucker, both 33. The film was partially funded by CAAM and is a centerpiece presentation at this year’s CAAMFest.

Yu Gu: It went well. We had a sold-out premiere. We had some good coverage from blogs, and we got a review in the Hollywood Reporter. It was fun to just go and interface with the audience. I really love Q&As. It’s really fun ’cause you get to hear people’s reactions. The film takes on a life of its own after you show it to people. The meaning of the film starts to grow in that sense. 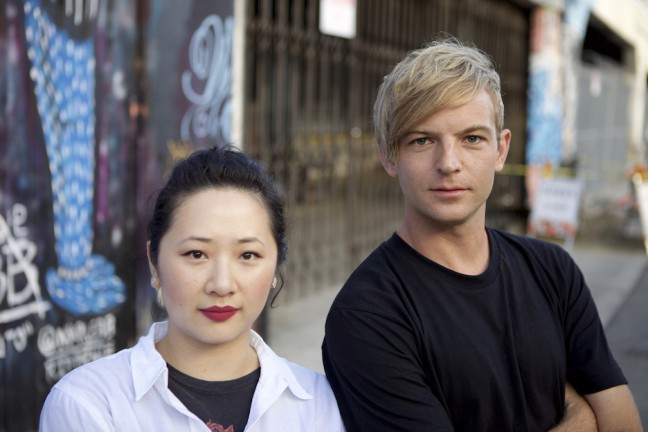 Were you surprised by any of the reactions?

Gu: There was one guy, a young Asian American kid who stood up and said it was the most moving film he’d ever seen. I was like, wow! He listed all the things he had in common with Arthur. It sounded like he was finally able to see himself on the big screen and see his struggles being expressed in this beautiful way and he felt really moved by that. That was a great moment for us. That was during our premiere.

We’ve had some mixed reactions to it too because Arthur is not an easy person. He’s not super likeable. He’s not a jolly fellow. Also, a lot people basically had a negative reaction to him — didn’t like him, didn’t get his journey. But at the same time, they still recognized what he was trying to do in terms of activism and his life. The Hollywood Reporter article said, “Oh, nothing happens in this film.” And to me, I think it’s really interesting because our film starts out with Jeopardy!. He’s a Jeopardy! champion. Obviously that’s a big draw for our film, and people expect a competition movie. They expect the classic competition film where you’re rooting for this underdog or you’re rooting for someone to win. It’s like the most American thing you can make. But our film goes against that grain. It’s about what happens after he gets his 15 minutes of fame and after he is the champion — what is life like after? — and all the complexities and struggles and ups and downs and the pain that comes with that person’s life. To me, it was interesting that “nothing happens” because I feel like everything happens afterwards. That’s where the transformation actually began.

How do you think it will play at CAAMFest? What do you think the reaction will be from an audience that will include many Asian Americans?

Gu: We hope that others will really love this film, especially young Asian males. I hope that they can come to love and appreciate this film even though it’s not the classic hero’s journey, this-is-someone-you-should-emulate type of film, necessarily. It’s a very complicated portrait. I hope people can understand that. I hope it can spark people’s reflections of their own family, their own journey, and how they treat others in their lives. Right now we’re coming upon a time where there’s a lot of activism in this country on the part of minorities, of women. I think the Asian American community is stepping up in that sense too. I hope that when people see this film they can also think about — instead of necessarily using anger to fuel that activism — to think about using something else. To learn how to actually love people in your life as that first step, versus just going out there in a blaze of fire and trying to change the world. That’s something I hope people can actually get from the film.

What drew you to Arthur’s story? Scott, you’re the one who approached Yu about it, right?

Scott Drucker: I did tell Yu about it very early on. It came from a place of curiosity. Because what was happening [in the online world] was there was this huge backlash to Arthur. I wanted to know more about who he was — because how much can you glean from someone’s 15 minutes of fame or your time in the limelight? Not much. I think people are so quick to make snap judgments. They’re so quick to paint this picture of who someone is. I knew that wasn’t it. I was a little even, angry, I would say. It’s really frustrating to see some of the [hostile online comments towards Chu]. It’s very directed. … It’s what we open the film with. It’s just an integral part of the story. Of course, right after Jeopardy!, even before we started filming, he started to write. And that’s when it took flight. I sent Yu an article and some clips. She wasn’t watching Jeopardy! when it was happening. I said, “This happened. This is an under-documented cultural moment. You have to check this out.” She said, “Yeah he seems interesting. Let’s pursue this.”

How long did you follow Arthur for and what were some of the challenges of that?

Drucker: A good amount of time — a year and a half, I’d say, from start of filming.

Gu: We were following him on this journey of remaking himself, and a lot of that — it’s a little difficult to necessarily document that in vérité form — because a lot of it is internal. This internal thought process, or his hopes and fears. I think that was kind of a challenge for us. And we really wanted to make the film to exist in a psychological space. A lot of that actually came in the postproduction process. While we were in production, we were trying to get the most access possible. We were following him in all of his interactions when he was doing speeches, as well as his family. We knew that was going to be a big part of it because his family experience is very rich and his family members are great — his mother, his brother, his sister. And he has that very taught and complicated relationship with his dad, which is fuel for what he’s doing in his life now. We knew his family was going to be very important. It was definitely in the postproduction process where we were inter-weaving all these different layers and different elements to express his psychological journey and this emotional journey that he was going through.

How did making this film affect you?

Gu: Before this film, I never used the term feminist to describe myself out loud, though I believed in gender equality. Making this film in a way radicalized me to fully own a feminist state of mind. There’s a lot of baggage with that term, but I think now we’re in an era where we can inhabit that concept with whatever makes sense to us personally.

Drucker: It awakened my feminist inclinations as well. One thing I found interesting is that Arthur says this thing that Asians are the new Jews. It made me a little aware of my own identity, what that meant to me growing up. It’s this thing I hadn’t thought about. I started thinking about it. Why do I never think about it? At this point, I don’t even know if Jews are a minority anymore, but that’s not the point. It’s the idea that we can relate on many levels.

What are you working on now?

Gu: Scott and I are working on some stuff together. I’m directing a documentary called A Woman’s Work, which follows three former NFL cheerleaders who are suing their teams and the league for wage theft. And Scott is helping me shoot that film. We’re also working with my dad. He’s a Canadian visual artist and we’re working on this project about migrant workers in Canada. It’s going to be a multimedia project. My dad is going to be doing installations, visual art, mixed media installations. And we’re working on these short documentaries — a little bit experimental pieces about these workers. It’s going to be part of an exhibit at the Art Gallery of Ontario in the beginning of July.

The interview is made possible by Comcast, and has been edited for length and clarity.

Who is Arthur Chu? is partially funded by the Center for Asian American Media’s Documentary Fund, which is supported by the Corporation for Public Broadcasting.

Melissa Hung is a writer and independent journalist in San Francisco. Follow her on Twitter at @fluffysharp.