When I first saw the Correcting Yellowface photos that recently went viral, I thought, what a creative way to address whitewashing in Hollywood.

The person behind the project is Michelle Villemaire, an actress, blogger, and mom who took time during her busy schedule at the end of last school year to create the Correcting Yellowface project. The photos juxtapose historic Hollywood yellowface photos—where white actors play Asian roles—next to images of herself imagined in those same roles.

I learned that from conception to completion, the project took about one and a half months, and that she took many of her photos on a self-timer. Villemaire is Thai, Chinese and white American, and wanted to show, in a visual way, how Asian Americans were rendered invisible by Hollywood, and that the recent whitewashing of Asian roles was nothing new.

Growing up in a small town in Massachusetts, then moving to Saudi Arabia, and moving to Florida to complete high school, Villemaire says that she was aware of whitewashing since she was a teenager from watching movies like The Good Earth based on the popular book by Pearl S. Buck, whose title role of O-Lan was played by Luise Rainer, a white actress.

Villemaire also runs the Home Made Mimi blog and on her YouTube channel, where she shares everything from lunch recipes to DIY projects.

I chatted with Villemaire on the phone, where she shared her inspiration behind the Correcting Yellowface project, her love of improv, and how being an only child contributes to her DIY creative spirit. 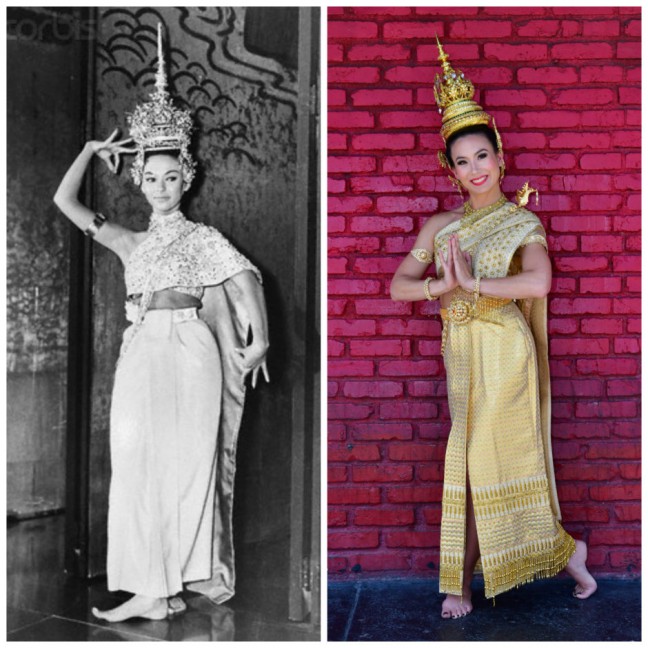 What inspired the Correcting Yellowface project?
I was inspired by the whole #OscarsSoWhite movement. There was [also] a lot of hoopla over Scarlett Johansson and also Emma Stone in Aloha. People were just up in arms about the audacity of Hollywood to cast white women in Asian roles, and I thought, ‘Did they not know that this has been happening for a long time?’

I remember growing up and being in love with black and white movies, and watching The Good Earth after having read the book in high school, and being really excited to see the movie. It was strange seeing Luise Rainer playing O-Lan in the movie and I was really disturbed by it. And wanting to be an actor when I was younger, it kind of crushed my dreams—even further—to see a white woman [play the role].

That was the inspiration — just to go back in history and do this light-hearted project that’s also serious. I thought it would be a lot of fun, and I knew it would informative and educational, but it’s not my personality to come off as dogmatic.

Did you expect it to go viral, and that so many people would see it?
No. I had no idea! Otherwise, I would’ve worn fake eyelashes and I would’ve hired somebody to do my makeup! (laughs) No, I’m happy with how the pictures were done. But I had no idea it would go viral. I’m so glad that it did. I don’t know how things go viral, but it was just such a joy to see people respond in such a positive way, and for people to write me notes, ‘I’m in tears, I’m so moved by this, thank you so much,’ from people all over in Thailand and India and Australia.

I really liked in the video you talk about how you made the photos, and how you created the costumes or the looks. I was surprised to learn you took most of them.

I did, I would just put my camera on the tripod and figured out how to set the self-timer, and I would take 10 pictures at a time in a burst. I would run over and sit down and tilt my chin a little bit for each shot until I got the right one. [Villemaire’s friend, Matt Dusig, helped with Photoshopping and also took the Aloha photo, below].

I was so tickled [after The Good Earth photo] that I just decided to continue and keep doing more. I sent it to my sister-in-law, who is a big movie buff, and she was tickled by it. So I said, ‘let’s do more.’ Then I thought, maybe I’ll put them all up in a blog post for everyone.

Can you talk a little bit about yourself and acting?
I’ve always been an actor myself, and that has not been easy. My white friends go on many auditions, and I’d go on like two auditions a year. My white friends would be extremely busy during pilot season having multiple auditions a day. There just aren’t enough opportunities. That in and of itself is a muscle that needs to be exercised.

Are there other projects you’re working on?
I take improve at Upright Citizens Brigade. I’ve been studying there for a while—I’m going into my 4th level. I decided to apply to the diversity scholarship program. So I’ll continue to do improv. Actually, standup is on my list of things to do this year.

I’m going to continue to do DIY and my Home Made Mimi channel, and I plan to incorporate DIY into my stand up. Next up on my list is to do an #ImWithHer party tutorial.

Have you always been a creative person?
Yeah, I’ve always been creative. I attribute my creativity to being an only child. I always had to find ways to entertain myself. At family gatherings, I would put together shows and menus and table centerpieces and things like that. My hands were getting into every aspect of a production, from acting to cooking to art and stationary. I like to do it all, I don’t like to just have one craft.

For more information about Michelle Villemaire, visit HomeMadeMimi and catch her on her YouTube channel.