"We do need to talk about “exclusion” because it is persisting today....America is not a perfect place, and neither should we perpetuate the idea that Asians are the model minority."

In a career that spans over 30 years, Felicia Lowe has focused on telling the story of her own family’s immigration to America, and in turn, has captured the story of the Chinese American experience. She began in 1979 with China, Land of my Father—after nearly ten years of journalism experience—with a cinema verite-style documentary capturing her own journey back to China to meet her paternal grandmother and explore her father’s history after his untimely death. Then, in Carved in Silence, Lowe comprehensively explored the history of the Angel Island Immigration Station, from the Chinese detainees to immigration officers and interpreters. Then, she directed an in-depth look into San Francisco’s Chinatown for PBS, winning an Emmy for Best Cultural Documentary.

In her latest film, Chinese Couplets, Lowe uncovers the secret history of her mother’s immigration to the United States and travels with her mother back to China for the first time. We talked on the phone about her early roots as a reporter, uncovering her mother’s secrets, and how the film industry has changed during her long career.

How did you go from being a broadcast journalist to a filmmaker?
I started off as a news writer at KNBC in Los Angeles, and then moved up to San Francisco and got a chance to be on camera. It seems strange because now Asian news reporters are almost stereotypes, but at the time I started, I was the first female Asian reporter at KGO-TV. I got experience reporting, but also hosted a community affairs program—something you don’t see as much these days. It was really wonderful training. You had to put together a story on the fly, be concise. In those days, they shot 16 mm single system film. You had to write your script in the field and send it back with the person who was bringing back the film to process it. It was such great training.

After hosting a PBS magazine-style show and also doing freelance producing, I also hosted a couple of San Francisco Chinese New Year’s parades. From there, I got the opportunity to join a group of journalists who were traveling to China and meet my paternal grandparents. Until you have someone pass on a story to you, you don’t think about things. Like I say in my first film based on that experience [China, Land of My Father], my son was only three months old when my father died. I was really motivated to try to get some answers about my father’s past and get the opportunity to meet his family. 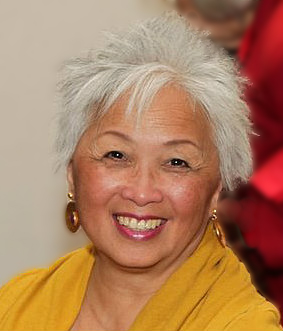 Did you know about these different aspects of Chinese immigration history that your family experienced—the Exclusion Act that led to people having to immigrate as “paper” sons and daughters, detainees at the Angel Island Immigration Station, Chinese immigrants to Cuba—before making these films?
Not at all. The first Ethnic Studies course at San Francisco State was in 1969, two years after I graduated from college. There was a movement towards that when I was at university. It was an outgrowth of the Civil Rights movement. But I didn’t know much about the Chinese American history before researching my films. When I did China, Land of My Father—it was really the first film that looked at our roots as a Chinese American. The first book written about the immigration station at Angel Island was written in 1979, and it inspired me to do the second film Carved in Silence—also because my family members were part of that history as well. I have other filmmaker friends who have told me that I am lucky to be in that position since, for example, so many films have been made about Ellis Island. I do feel lucky.

I came up when the library of films about Asian American history was narrow. I was just fortunate in timing and that I had the interest. Until you see our history in print, in media, in all the ways that other people get to learn about their history—it doesn’t exist.

Your latest film Chinese Couplets, which tells the story of your mother’s immigration history and life, is told in a more poetic, memoir-like way than your previous films. Why did you decide on this style for this project?
I’m always asking myself what do I bring to the table that someone else can’t? How do I want to engage an audience? What do I want to be my takeaway? I have the story of paper sons and daughters in every one of my films, it’s such a complicated idea that it is hard to grasp. So, I feel like I came closest this time in really illustrating it. I got fancier with graphics, but I also thought about how I could do this with words, with images. I also really thought about the universal through-line of the film. With Chinese Couplets, it’s that every family has secrets. It’s that mother-daughter relationships are not picture perfect. They are fraught. But it is also about the complexity of how immigration policies work in this country. It is a cautionary tale that is still relevant today.

In Chinese Couplets, you talk about how you find out about your mother’s past because she chose to tell your daughter the truth. What was that like?
The fact that my mother would feel closer to my daughter, and would feel more comfortable telling her about her past is actually really common. The beginning of the film was finding out that my grandfather had spent time in Cuba. My mother felt like he had abandoned her and had a lot of anger about that. I had no idea. My mother and I had always had this tension of her need for privacy and my need to know, and after I found out this history from my daughter—I took the gloves off. In some ways, the inspiration of the film was trying to solve this riddle of my mother.

For this film, you took trips to Cuba and China. What was the timeline for putting this film together?
I took the first trip to Cuba in 1998 to find out information about my grandfather. I wanted to understand what my grandfather was doing in Cuba. What did he do for work? Did he start a second family, and that’s why he never sent money? The records were in such shambles that it was just impossible to find him, especially because a lot of Chinese immigrants to Cuba changed their names. The trip with my mother to China was in 2000, and I took another trip to Cuba in 2003. A lot of the footage had been done years before but in terms of assembling the story, it took a lot of time to figure out how to pull it together.

What was the most shocking or intense part of finally uncovering your mother’s story?
I think it was acknowledging first hand everything she had gone through. What she had buried for so long showed up on that trip we took to China. She had buried her pain down deep. I think you see that in the film with the footage of her crying the first night we are in China. I had just turned on the camera when I heard her crying to record audio, I didn’t even know that it would capture her image. I had never seen my mother so vulnerable. She had reverted to this scared little girl compared to how macho she was in most of her life.

Another big realization I had while making this film was that maybe I could do something to ease her pain with my research. I realized that she had psychic scars that maybe I could help her with. I feel like the trip I took to Cuba allowed her some reconciliation. Though I didn’t find out anything about him, what I learned seemed to help her. I found out that maybe her father was just too poor to send money back, that he wasn’t the no-good bum that she had thought he was her whole life.

For CAAMFest 2015, there was a double screening of your first film, China, Land of My Father, and Chinese Couplets. What was that like?
That was a very satisfying show. It showed not only both sides of the family, but both sides of my career—from straight journalism to becoming a filmmaker. It reminded that the films that I’ve made have made a difference, or continue to make a difference. It also showed, I hope, the universality of these stories. We do need to talk about “exclusion” because it is persisting today. What happens to the young people—the DREAMers—the people who end up being accidental victims? I think people are speaking out about these things now. America is not a perfect place, and neither should we perpetuate the idea that Asians are the model minority.

What are you working on next?
I have ideas for several projects, but first I am focused on getting Chinese Couplets seen as widely as possible. I also have a lot of footage of the Chinese in Cuba that I could maybe make into a 30-minute film. I’ve pitched it to my daughter who is a producer. I have a concept for a graphic novel based on the historian Him Mark Lai, who I met through my work with Angel Island. It would be to turn him into a character called “History Man” to show kids how we can make history ourselves.

The idea I am most excited about comes from this trunk of clothing that I have. It was the hope chest of a woman named Shirley Chan who died in 1943, and this chest was passed around to all the family members. A man who was in Carved in Silence gave it to me. In this chest are all these dresses that she put together for her honeymoon, but then she died before she got married. I thought it would be cool to bring together different Chinese American female artists to interpret the clothes: visual artists, dancers, writers. The trunk would be a jumping off point and I could see it as an installation or museum exhibit.

Chinese couplets will air on PBS this may for APA Hertiage Month. Check local listings.

This is an edited version of the interview. The interview is made possible by XFinity.