It took me a couple viewings of Last Days in Vietnam before I could fully comprehend its central message: the human cost of war. As a 1.5 generation Vietnamese American, I grew up with the Vietnam War as a constant topic of conversation in my home, amplified by the fact that I am essentially a byproduct of that conflict that has left such a strong imprint on American history. My father was a lieutenant who fought in the South Vietnamese army for a democratic Vietnam alongside American soldiers. When the war ended, he tried to escape Vietnam but was eventually imprisoned in an internment/re-education camp for eight years before making his way to the United States with my family in 1992 as part of the Humanitarian Operations (HO) Program. The local newspaper in Saigon announced my family’s name as part of a series of groups qualified to go to the U.S. at the time. We said our goodbyes to our relatives at Tan Son Nhat Airport as we boarded the plane to start our new lives first in Thailand’s refugee camps for several weeks before arriving in Boston. I was four years old at the time and the fourth of five children. My mom carried my two-year old baby sister and held my hand as my dad led my three siblings, bringing only one big red luggage containing our possessions. My family’s story is one of many Vietnamese American stories from the diaspora that illustrates the refugee experience. These voices are central to painting a fuller picture of what happened during the Vietnam War and its aftermath to the formation of many resilient and vibrant Vietnamese communities throughout the U.S. today.

The importance of the First Days Story Project as an effort to collect stories and as an extension of Last Days in Vietnam lies not only in preserving the voices of the lived human experience of the war—both of Vietnamese American refugees and American veterans—but also in sharing these stories to give representation and agency to all those whose lives were affected by the war. As we approach the 40th Anniversary of the fall of Saigon in April 2015, we can use this time to reflect, engage in dialogue and perhaps find some healing in our lives and across communities. It is truly an honor and a privilege to be a part of this project and to participate in a national endeavor to collect and share voices that want and need to be heard.

In collaboration with PBS’s American Experience, StoryCorps will be recording the stories of Vietnamese American refugees and Vietnam veterans with strong ties to the post war diaspora and evacuation of Saigon. Join us to remember and honor this important piece of our national history. A StoryCorps interview is 40 minutes of uninterrupted time for meaningful conversation between two people who know each other well. You will receive a copy of your interview. With your permission, copies will be archived on the First Days Story Project website and at the American Folklife Center at the Library of Congress.

Last fall, hundreds of people donated to our crowdfunding campaign to make this project possible, and this January the First Days Story Project team will travel around the U.S. to six major cities (San Jose, Westminster, Seattle, Houston, Boston, Washington, D.C.) with concentrated Vietnamese and Veteran communities. With your help, I encourage you to follow along in this journey with us. If you or someone you know has a story tied to the Vietnamese American refugee experience or post-war evacuation, please consider sharing your story by out filling a linked form below.

Share your story here in English, here in Vietnamese. If you opt to take part in the First Days Story Project, we will be in touch with you. Find the Vietnamese language form here. 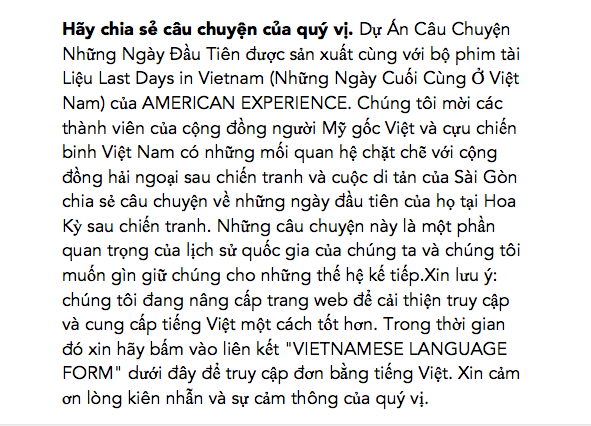 Ngoc-Tran Vu is an artist and organizer as well as the Project Coordinator on Last Days in Vietnam with AMERICAN EXPERIENCE. She can be reached at tran_vu@wgbh.org.