SAN FRANCISCO, March 27, 2014 – CAAMFest 2014 successfully concluded on March 23, 2014, after 11 days of film, music and food programming. As the largest festival of its kind in the country, CAAM welcomed over 260 participants and showcased over 120 films from 19 countries, including 29 narrative films, 15 documentaries, 77 short films as well as 7 world premieres, 2 North American premieres and 17 San Francisco premieres. The festival saw a 20 percent increase in attendees, welcoming over 26,000 audience members.

Congratulations to the 2014 CAAMFest Award winners: 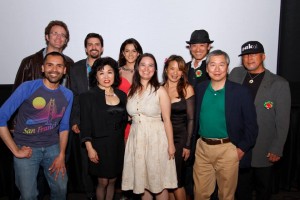 Statement from director Anthony Lucero: Thank you to Masashi Niwano for taking a chance and programming my film, to the CAAM staff and of course the great Bay Area audience that came out in full force to watch our film. EAST SIDE SUSHI is a film that I, my cast and crew poured everything into and the recognition is more than gratifying. It’s a special honor to receive this award and acceptance from the CAAMFest audience. Much love to you all. 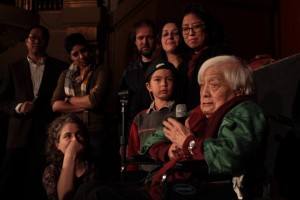 Statement from director Grace Lee: We are incredibly honored to win the Audience Award for Best Documentary at CAAMFest. The screening at the Castro was such a moving community event for our entire team and for Grace Lee Boggs as well. To see so many people embrace not only the story but get so excited about the ideas in the film and to do it with Grace Lee Boggs herself in the room will be a highlight of our film’s trajectory for years to come. Thank you so much, Bay Area audiences and CAAMFest for bringing us all together.

2014 Loni Ding Award for Social Issue Documentary
Loni Ding (1931-2010) was a veteran independent television producer and university instructor. She devoted her life to advocacy and public service, and played a key role in the founding of several public media organizations, including the Center for Asian American Media (CAAM) and the Independent Television Service (ITVS). Her award-winning productions, which include Nisei Soldier (1984), The Color of Honor (1988), and Ancestors in the Americas (1997), were among the first to document early Asian immigrant histories. The Loni Ding Award was created in 2011 to honor the film and filmmaker that most reflects her passion and commitment.

Winner: WHY WE RISE 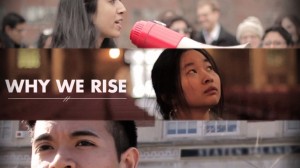 CAAM is proud to announce that the fourth annual Loni Ding Award winner and its prize of $1,000 goes to Corinne Manabat (SFIAAFF ’09) and Brian Redondo and their short film WHY WE RISE, which highlights the stories and experiences of three Asian American youth who are undocumented students.

CAAM (Center for Asian American Media) is a non‐profit organization dedicated to presenting stories that convey the richness and diversity of Asian American experiences to the broadest audience possible. CAAM does this by funding, producing, distributing and exhibiting works in film, television and digital media. For more information on CAAM, please visit www.caamedia.org.