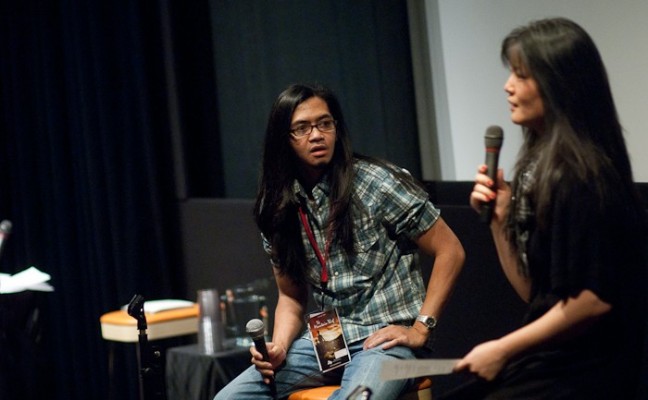 My journey as a filmmaker has had its share of ups and downs. I am both Asian American and queer, and both identities are often contained in niche boxes in the film world. Right after receiving my graduate degree in screenwriting, I co-wrote and produced an indie film that premiered at Sundance, was acquired and theatrically released—a groundbreaking event at the time for an Asian American-themed film. The following years were a blur of studio rewrites, a spec sale, and many near misses. The successes were few and far between but it was enough to keep me afloat for years, until I hit a wall—the jobs stopped coming and my creativity and productivity reached a new low. And, maybe out of this low, a few years ago, I decided to direct a film. I co-directed and co-wrote the feature Sunset Stories. It was made with good friends, on no budget. The film made its festival premiere at SXSW.

After Sunset Stories, I was chosen to participate in the Center for Asian American Media (CAAM) Fellowship, a mentorship program. At first, I was hesitant because many of these programs are geared towards newbie filmmakers on the rise. Why should I take away an opportunity from a young filmmaker when I’ve had my share of opportunities? Partly, my ego hesitated because it felt like a public confession that I was either lost in my career, or worse, a failure admitting defeat. But since I was reinventing myself as a director, I felt that maybe I fit the newbie bill. The film landscape has changed so drastically from the beginning of my career that I could use an intervening and helping hand, and so I applied.

The CAAM Fellowship is the brainchild of producer Karin Chien (The Motel, Circumstance, Robot Stories), who has made many critically acclaimed films, and CAAM’s public media director Sapana Sakya. The purpose of the fellowship is to introduce each Fellow to working professionals of Asian descent for mentorship in their chosen discipline, and to build a network of Asian American media professionals who can support each other in tangible ways. I applied with a feature film that I wanted to shoot in the Philippines, which these days doesn’t seem as outlandish, as film is moving in a global direction. All my reservations were put to ease when I met my fellow Fellows (writer Derek Nguyen, filmmaker Kimi Takesue and cinematographer Eric Lin), all of whom have impressive and enviable resumes. To my surprise, I found out all the Fellows were caught in the same mid-career funk as me — we all needed to define and re-establish our filmmaking identities, within an evolving film world.

One great thing about the CAAM Fellowship is the fact that we can shorthand the conversation around identity politics. We’ve all experienced the issues firsthand, so we can acknowledge it and then just move forward. That in itself is refreshing. Before starting with our mentors, we met in March during the San Francisco International Asian American Film Festival (CAAMFest) to discuss what our issues were in our careers and to strategize a plan of attack for the mentoring period. Here, we met literary manager Angela Cheng-Caplan, who facilitated a conversation where we really looked within to find and isolate our blocks (most of which are self-imposed) in our careers and how to move forward. This process may sound hokey and a bit like therapy, but it really worked. From our brief time there, Angela identified that my need to make an indie no-budget film in the Philippines may just be a masked call for help – that I wasn’t artistically and mentally challenged by what I’m doing now, and it was time to get out of my comfort zone and start determining what I really want to do with my life and career. Angela suggested that instead, I look into television writing, which is experiencing such a creative renaissance that even I, with my fragmented love for the indie and blockbuster film worlds, could fit in. Afterwards, I decided to follow both paths to see where they led. Through CAAM, I was given two mentors. The first was Tanya Yuson, a producer who lives in the Philippines, who is helping me formulate producing my indie feature. The second, Quan Phung, is a seasoned television producer and executive, who is helping me organize my high-concept, often outlandish, television pilot ideas.

I was honored to be chosen to take part in the CAAM Fellowship. It reminded me that my journey is similar to many of my peers and it made me realize that community building is essential to filmmaking. For many years, I often believed that community-based organizations worked against filmmakers in that they supported safe work in lieu of more challenging projects, thus creating a stagnant, homogenous output. All this, even though I was supported throughout the years by these very same community media organizations. My experience with the CAAM Fellowship reminded me that, like my identity and heritage, my voice is singular and is a prize, not a hindrance. As filmmakers evolve in the new media landscape, it is great to see that CAAM and their Fellowship are evolving as well in treating us like distinct individual artists who need to define their own boxes. The Asian-American community has a long way to go in the media arts but looking at the film and television landscape today, there are more Asian American filmmakers, writers, and performers than ever. Rare programs like the CAAM Fellowship show the importance of paying it forward and returning the altruism my mentors and community have shown me over the years – that each person’s success is essentially shared by all and building community makes us that much stronger.

This was originally posted at Filmmaker Magazine.

The CAAM Fellows Showcase takes place Sunday, March 16th at 10 am at Pa’ina Lounge in San Francisco’s Japantown during CAAMFest 2014. Join top professionals and the newest stars of the film, TV and documentary worlds in an informal conversation over coffee. Hear about what it takes to maintain a successful and sustainable career as Asian Americans in the entertainment landscape, and how to keep working in an ever-changing media environment. Learn more about the CAAM Fellowship, a professional media mentorship program, and meet the 2014 CAAM Fellows. The event is free and open to the public.