After a successful national PBS broadcast, a sold-out world premiere at the 2012 SF International Asian American Film Festival (now CAAMFest) and a national festival run garnering numerous awards including the Audience Award at Ashland Film Festival, Life on Four Strings emerged as the winner of a national online vote of 32 independent film festival favorites across the US and Canada. The final round of voting included Don’t Stop Believin’ Everyman’s Journey, 12 Years A Slave, Fruitvale Station, and Best Kept Secret. 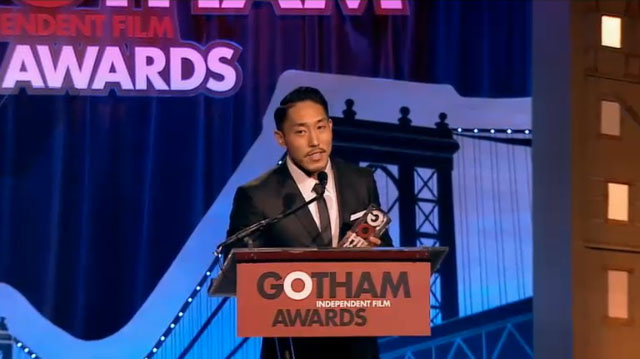 Directed by Tadashi Nakamura and produced by the Center for Asian American Media (Producer Donald Young and Executive Producer Stephen Gong) and Pacific Islanders in Communication with support by the Corporation for Public Broadcasting, Life on Four Strings is about the inspiring and inventive ukulele virtuoso Jake Shimabukuro, who has inspired audiences worldwide with his humble four stringed ukulele  transforming all previous notions of the instrument’s potential.

Having performed with artists as diverse as Bela Fleck, Cyndi Lauper and Yo Yo Ma and even in front of Queen Elizabeth, Jake has risen to global stardom.  Life on Four Strings offers an intimate look at not only his life as a performer and musician but family man and all-around gentleman; capturing Jake from his Hawaiian roots, to his trips on the road around the world and playing for  victims of the devastating 2011 tsunami in Japan.

Life on Four Strings is streaming via Amazon Instant Video and available through distribution at the Center for Asian American Media.

Congratulations to filmmaker Tadashi Nakamura who accepted the awards last night! Tadashi previously directed A Song for Ourselves (co-funded by CAAM) on Chris Ijima, one of the leading musical voices of the Asian American movement and Pilgrimage, on the annual tradition of Japanese Americans who trek from Los Angeles to Manzanar to draw attention to the internment of Japanese Americans during World War II.