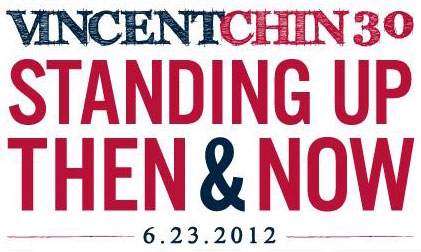 Listen to the recording of the event from APEX Express!

Here’s the video playlist of the full event.

CAAM and Asian Pacific Americans for Progress are proud to co-present “Vincent Chin 30: Standing Up Then and Now, A Bay Area Conversation” a local program on the 30th Anniversary of the murder of Vincent Chin, who’s death led to a diverse coalition of activists seeking justice, and the emergence of an Asian American consciousness.

Following this broadcast, we’ll have a film screening of “Vincent Who?” (40 min.), which explores the history of the Vincent Chin case with interviews of key players and a new generation of activists. Next is the main event, a conversation on hate crimes, bullying and the legacy of Vincent Chin featuring leaders of local civil rights organizations who are engaging in a new generation of activism, advocacy and education in our communities. The distinguished slate of speakers are:

Our moderator will be R.J. Lozada, a contributor to APEX Express and an award winning filmmaker, who also works in the legal field representing the condemned in San Quentin state prison. Special guests Helen Zia (Asian American journalist/activist) and Norman Fong (Chinatown Community Development Center, Executive Director) will kick-off the program by briefly sharing their experiences and reflections on the Vincent Chin case!

Tickets are on sale for $10.
RSVP today! http://vc30sf.eventbrite.com/

Vincent Pan is the Executive Director of Chinese for Affirmative Action (CAA), a community-based social justice organization in San Francisco.  CAA is a progressive voice that advocates for systemic change to protect immigrant rights, promote language diversity, and remedy racial injustice. Prior to joining CAA, Vincent worked with the William Clinton Foundation in Beijing on HIV/AIDS issues, and was the co-founder and executive director of Heads Up, a nonprofit AmeriCorps organization that serves low-income children by in Washington, D.C.

Ling Woo Liu is the first director of the Fred T. Korematsu Institute for Civil Rights and Education, which is a program of the Asian Law Caucus. Since its launch, the Korematsu Institute has played an instrumental role in passing California’s “Fred Korematsu Day,” the first day in US history named after an Asian American. The Institute has also distributed thousands of free Korematsu Teaching Kits to classrooms around the country. Prior to joining the Institute, Ling spent a decade working as a multimedia reporter, including several years reporting for TIME magazine in Hong Kong.

Zahra Billoo is the Executive Director for the CAIR San Francisco Bay Area (CAIR-SFBA) chapter. Zahra strives to promote justice and understanding at local and national levels. In 2009, Zahra joined CAIR-SFBA and immediately embraced her roles as community organizer and civil rights advocate. She frequently provides trainings at local mosques and universities as part of CAIR’s efforts to empower the community, while building bridges with allies on key civil rights issues. Zahra also represents victims of discrimination and advocates for positive policy changes that uphold civil rights for all. Her work with CAIR-SFBA has been highlighted in local and national media outlets including KTVU, NBC, CNN, MSNBC, the Christian Science Monitor, and NPR.

Angela F. Chan is a staff attorney managing the Criminal Justice Reform Program at the Asian Law Caucus in San Francisco, which is the nation’s oldest legal and civil rights organization serving the low-income Asian and Pacific American communities.  Angela represents immigrant families who have youth caught in the juvenile justice system, and youth who are harassed or discriminated against in the K-12 education system.  Angela was named a Local Hero by the San Francisco Bay Guardian and was awarded a Monarch Award by the Pacific Asian American Women Bay Area Coalition for her advocacy on behalf of immigrant families.