The LA Asian American Film Festival, presented by Visual Communications, is taking place from May 10 – 20, 2012.
Check out the website for screenings and this short LAAPFF promo video featuring Michelle Krusiec (produced by National Film Society)! We’re also excited that a few CAAM commissioned or produced projects will be screening at the festival. 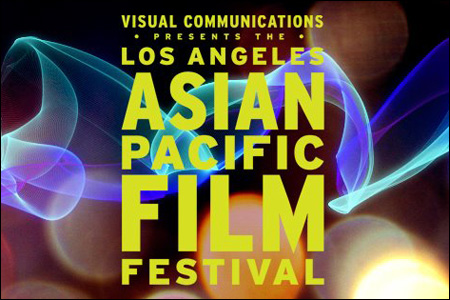 “I wanted to create something that wasn’t censored and gave women of color the opportunity to spit, barf and swear all over the screen with the freedom of any Judd Apatow or ‘Hangover’ dude-crew,”
– Christine Kwon, the “Nice Girls Crew” creator and writer.

As Asian American media moves to greater prominence in the online space, web series are becoming the norm thanks to the likes of Wong Fu Productions, NigaHiga and KevJumba. However, like most filmed entertainment, female-centric stories driven by women content creators are still a rarity. This is antipodal to a recent Nielsen report on social media that shows the largest demographic of the most active social networkers are Asian American women between the ages of 18-34 years of age. Filling this void are transmedia tastemakers like Felicia Day (THE GUILD), online make-up guru Michelle Phan, and Aussie Natalie Tran (Community Channel), but they’re outnumbered by the dominant man-child machismo that infests the current internet entertainment landscape. Into this void comes Christine Kwon, Festival Managing Director of the Center For Asian American Media (CAAM) and longtime Film Festival darling Tanuj Chopra (PUNCHING AT THE SUN, Festival 2006), who team up for the original web series, NICE GIRLS CREW!

Sophie (Lynn Chen), Leena (Sheetal Sheth), and Geraldine (Michelle Krusiec) have been true “frenemies” since elementary school. All grown up and still nuts in their own way, they form a book club, yet whenever they meet, they actually never really talk about the book. That’s not the point. Their subjects of interest? Don Draper, cannibalism, sex, dry martinis, interpretive dance, you name it. Feelings are hurt, banter is aplenty, and like those dames from ABSOLUTELY FABULOUS, the liquid lunch is a necessity.

The three actresses, Chen, Sheth and Krusiec, are comedically agile. For fans of their usual work, comprised of mostly dramatic or sultry roles in independent films, it’s refreshing to see three strong performers who get to truly exercise their acting muscles in the very tough genre of comedy, and raunchy comedy at that (We can thank BRIDESMAIDS for paving the way for this recent trend). All five webisodes of NICE GIRLS CREW will be screened back-to-back for this special presentation. World premiering to a sold out and enthusiastic audience in San Francisco recently, the Film Festival is honored to present this hometown screening, as the web series was shot entirely in Los Angeles.

Watch an interview with Sheetal Sheth and Lynn Chen on Nice Girls Crew (via AsiansonFilm.com
The ‘Nice Girls Crew’ is Not Your Grandmother’s Book Club

“Docs about abuses of justice abound, but few present complicated events in so concrete, linear and compelling a fashion.”
– Ronnie Scheib, Variety

Fifteen years ago, sisters Marijoy and Jacqueline Chiong, daughters of a wealthy Filipino-Chinese trucking magnate, were kidnapped near a trendy mall in Cebu. Supposedly Marijoy’s body had been found in a ravine, having been raped and killed. Jacqueline’s body had never been found. This kidnapping-rape-murder case was an all-consuming media circus in the late 1990’s in the Philippines. Arrested and charged with the crime were seven young men, including 19-year old Francisco “Paco” Juan Larranaga, a young student attending culinary school in Metro Manila. Paco, his family and friends all claim that he must be innocent, after all, there were multiple eyewitness accounts of friends who swore that Paco was with them in Manila at the time the crime was allegedly committed. GIVE UP TOMORROW is Paco’s slogan, his mantra in his quest to prove his innocence still fifteen years after the horrific incident.

This documentary film is a piercing case study of political and judicial corruption involving some of the most politically prominent and powerful families in the Philippines. Despite credible evidence pointing to Paco’s innocence, and numerous inconsistencies during the trial and subsequent appeals, he was nevertheless convicted of the crime and sentenced to death by lethal injection. Viewers will sympathize with Paco’s family, who desperately try every legal avenue for appeal to overturn Paco’s conviction amid the constant melodrama and media circus surrounding his case. Amnesty International, the government of Spain, Fair Trials International and the United Nations have all advocated for Paco’s innocence and release. He continues to be jailed to this day. Director Michael Collins and Philippine-born producer Marty Syjuco have crafted a riveting tale on a young man’s struggle to maintain his innocence.

GIVE UP TOMORROW has received worldwide critical acclaim, as winner of the 2011 Tribeca Film Festival’s Audience Award and Special Jury Prize for Best New Director. In addition, the film won the Audience award at the Sheffield Doc/Fest, the Human Rights Award at Docs Barcelona, and the Activism Award at Michael Moore’s Traverse City Film Festival.

“Lively and engaging… S. Leo Chiang’s documentary is an engrossing look at the bitter divisiveness of the present U.S. political landscape. It should stir timely debate”
– Dennis Harvey, Variety

This character study of former New Orleans Congressman Ahn Joseph Cao offers a refreshing look behind the scenes of American politics despite his short tenure (2008-2010) in the House of Representatives. In an unlikely victory over Democratic political veteran Congressman William J. Jefferson in 2008, all eyes in the Asian American community were on newly-elected Congressman Cao, who was the first Vietnamese American ever elected to the U.S. House of Representatives. Landing in Congress during his community’s fragile post-Katrina economy and thrown smack into the middle of the national health care reform debate, one can sympathize with the difficult choices Congressman Cao faced as an Asian American Republican representing a largely Democratic district comprised of 62 percent black and 31 percent white residents. To call it a “delicate balancing act” doesn’t do justice to the complexities of economic, ideological and racial issues that confronted Congressman Cao. And having beaten a longtime incumbent partly due to questionable ethics of the veteran politico, how did ethics play out in Congressman Cao’s own bid for a second term against an opponent with a checkered past?

Veteran documentary filmmaker S. Leo Chiang (TO YOU SWEETHEART, ALOHA, Festival 2005; A VILLAGE CALLED VERSAILLES, Festival 2010) brings us yet another captivating look into a character and a community faced with a complex set of competing issues and interests. As the story of Congressman Cao’s political stint reveals itself, it brings to question how difficult it is to maintain one’s sense of integrity and reality in the ever-churning barrel of power politics. Set against the ever-evolving ethnic landscape and fickle political alliances in both the regional and national political arena, MR. CAO GOES TO WASHINGTON is an engaging case study of American politics sure to please both political novices and seasoned hacks.

When 60 year-old Steven, a Caucasian male looking for a young Chinese bride, roams dating websites to find yet another Chinese woman to fulfill his romantic quest, he finds 30 year-old Sandy. Sandy lives in China and quickly responds to Steven’s emails. Before long, Steven visits Sandy in China and brings her back to the United States to get engaged. Sandy’s life is suddenly flipped around as she tries to adjust to a new country and its culture through her possible new husband, who she has only recently met. Sandy doesn’t speak English and Steven doesn’t speak Chinese.

The two communicate through a language of their own- through gestures, presents, physical affection and picking up on each other’s moods. Obviously, this creates an unimaginable level of frustration and misunderstandings between the couple, which is how the Chinese American filmmaker, Debbie Lum, starts to mediate their relationship as their translator. As Debbie’s involvement in the couple’s relationship deepens, the trio creates a new dynamic relationship where each is dependent on the other. All the while, the filmmaker’s role documenting her subjects has become questionable as she has become an active influence in her subjects’ lives. As the filmmaker tries to distance herself from the role she has fallen into, their fragile relationship is even further upset. Will the relationship survive or come to a hopeless wreck as skeptics predict? The documentary reveals a close look at the personal stories of the characters, as we come to understand who they are and what drives them to be in this relationship.

An interesting look into the world of online dating where anyone can be as racially specific and biased as they want, SEEKING ASIAN FEMALE reveals how as strange albeit common fetishes and obsessions are encouraged and sought after, this is an example of people finding what they are looking for through these means. The documentary analyzes the mentality behind the mysticism and notions of seeking an Asian woman and what this represents in American culture.