Kyle Chu, former CAAM intern, musician, filmmaker, and aspiring teacher, blogs about his experience as Mr. Hyphen 2010, the importance of celebrating community engagement, and how truck tons of glitter helped him win the competition. Kyle will be passing his crown to Mr. Hyphen 2011, on November 5th at the Brava Theater. Tickets are still available!

Kyle Chu, former CAAM intern, musician, filmmaker, and aspiring teacher, blogs about his experience as Mr. Hyphen 2010, the importance of celebrating community engagement, and how tons of glitter helped him win the competition.

Thank you, Kyle, for taking time out of your busy schedule to reflect on what this year has meant to you. CAAM is a Mr. Hyphen 2011 community sponsor. CAAM Members can access a special discount code when purchasing tickets to the November 5th event at the Brava Theater.  Members, email us at membership [at] caamedia [dot] org to get the code. See you at Mr. Hyphen 2011! 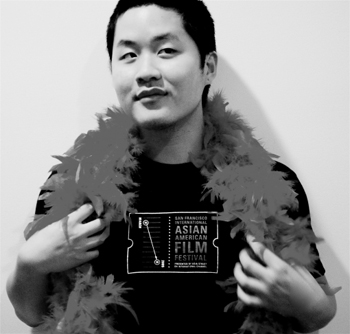 DON’T STOP ME NOW
by Kyle Chu
Returning to my hometown, San Francisco, a recent college graduate (read: unemployed), I was extremely fortunate to stumble across – and intern for – CAAM. I quickly learned that CAAM is a family of social justice-minded film enthusiasts and smartie-pantzes with a proclivity for eating cake. It. Was. Awesome.

Come September 2010, at the official conclusion of my CAAM Film Festival internship, I was left with the motivation and desire to continue Asian American community work. While searching for jobs and community opportunities, I caught the web blast for Mr. Hyphen 2010, a (faux beauty) social justice pageant, aimed at celebrating male community activists and advocates who dedicate their time to support and champion APIA non-profit organizations across the United States. I remember laying in bed, thinking to myself, “Wouldn’t it be funny to be in a pageant?” Turning this idea over in my head, I was immediately reminded of the first issue of Hyphen I’d picked up in college. What a formative experience that was for me, how important it was to become engaged in positive, by-us-for-us media. So that week, my distant imaginings became less far-flung when I submitted my video and application for Mr. Hyphen 2010, and before I knew it, I’d been selected as a finalist. 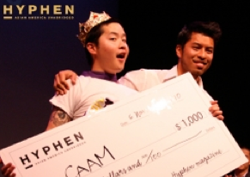 In the weeks before the pageant, I brainstormed for talent segment ideas. I was pumping jams on the 22 Fillmore when Freddy Mercury came on my mp3 shuffle. That’s when I had a semi-religious vision and knew I wanted to do drag. I saw flashy fingers. Fierceness. Truck-tons of budget glitter.

I recruited high school buddies Sarah Cargill and Ami Nashimoto, and we collectively choreographed a dance routine to Queen’s “Don’t Stop Me Now.” We practiced for a solid month, stomping out sweaty dance moves in my parents’ living room. As the day of the event came closer, we felt more than prepared.

The pageant was one huge, exhilarating rush, or a variety of reasons. The Mission District’s Brava Theater was dramatically lit and brimming with friends, family, coworkers, and supportive attendees – all unified to celebrate the men in our community. The pageant was hosted by the handsome performer and writer, D’Lo, and our judges were: filmmaker Alice Wu; Chairman of the International Gay and Lesbian Human Rights Commission, Dipti Ghosh; and Incumbent Mayor of Campbell, California, Evan Low. The flashy fashion segment featured the awesome stylings of Cecilia Aragon, Estrella Tadeo (The Mission Statement) and Jenn Lui (Intwined). The crowds were totally responsive, and having a blast. What happened that night was a beautiful thing.

Moreover, the giddy backstage anticipation and camaraderie I shared with my fellow contestants, Ryan Takemiya (NAPAWF), Anthony Kim (Korean Community Center of the East Bay), Antonio Moya (Mabuhay Health Center), and Kilusan Bautista (United Playaz), was, for me, a central and invaluable element of the experience. It allowed me to see the event not as a competition but as a moment of empowerment. I saw the diverse fibers of our community spirit and our common ground underneath all the lights and the glitter. 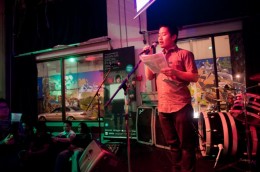 Post-pageant, I had the opportunity to meet community organizers, learn more about Hyphen’s core values and political underpinnings, and become better acquainted with their unique and subtle progressive approach. As the winner of Mr. Hyphen, I was humbled to represent Hyphen in college conferences around the Bay, and was honored to discuss the pageant and the importance of Asian American media on NPR.

The Hyphen check I received was used towards funding the CAAM’s annual SFIAAFF event, Directions in Sound, which brought visual artists, DJs, and dope acts such as Taiyo Na, B. Bravo, Silver Swans and the Bangerz to the San Francisco stage. I was excited to perform a drag act alongside the Rice Rockettes as a pre-headliner for the night. It was a lot of fun.

As we come closer to another Mr. Hyphen pageant, I have come to see that Mr. Hyphen is larger than a crown, sash, and grand prize, or even the individual who wins the title. It’s a celebration of all of the men who may dedicate their lives to community empowerment and combating reductive stereotypes that fail to speak to the diversity, multiplicity, and dopeness that is our people. I’ve had an awesome reign, and am stoked to cheer on this year’s contestants, and this year’s new Mr. Hyphen!! 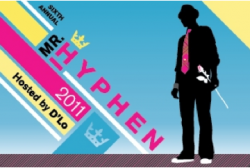