We are thrilled to present, not one, but three films at this year's Mill Valley Film Festival: BUSONG, THE BUTCHER’S WIFE, and SACRIFICE

We are thrilled to present three films at the Mill Valley Film Festival. BUSONG, THE BUTCHER’S WIFE, and SACRIFICE! These three films will be playing between October 6 -16. 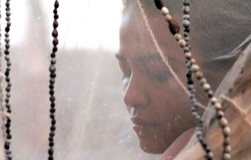 BUSONG (PALAWAN FATE) In this captivating meditation on nature, love, spirituality and loss, a woman who finds herself stricken with a strange illness that prevents her from setting foot on the earth takes a journey to find a cure among the indigenous people of Palaui (in the Philippine Islands), who live in sync with the land, water and sky. Woven into her tale is a world of shamanistic rituals that describe the ways prayer, myth and story shape a culture. Throughout comes an emphasis on busong, or karma: When nature or individuals are disrespected, the consequences are clear and swift. BUSONG, which premiered this year at Cannes as the first Palawanon indigenous feature, mingles magical realism with trenchant social commentary about the effect of mining, dynamite fishing and logging upon indigenous peoples, creating a beautiful homage to the idea of myth, creation and rebirth. 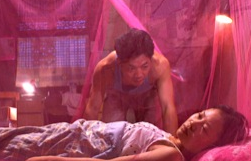 THE BUTCHER’S WIFE (WANGLIANG’S IDEAL)
Liang the butcher and his wife Qiao make an attractive couple in a village four hours by bus from the eastern Chinese city of Hangzhou. But for six months the marriage has remained unconsummated because Qiao wants to avoid pregnancy in case she passes the college entrance exam (on her fourth try). Liang indulges her “foolish daydream,” trusting in her agreement that she’ll sleep with him if she fails. But her real goal is to leave the stifling village and join others reaping the economic benefits of city life in Hangzhou. As summer begins, Qiao boards the bus for the city, Liang in frantic pursuit. This domestic tragedy asks if a principled man and woman have a right to the life of their choice, or does marriage spell the end of all dreams? In this intensely gripping modern fable, the coming of autumn signals a new chapter that hints at reincarnation and destiny. (Warning: includes explicit scenes of butcher’s work.) 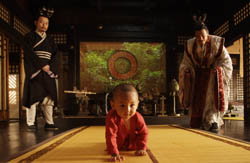 SACRIFICE (ZHAO SHI GU ER)
This epic tale from Chen Kaige (FAREWELL MY CONCUBINE, MVFF 1993) comes rich in period detail and heavy with overtones of Greek tragedy as the action unspools amid clanging swords, flying arrows and horseback duels. But beyond the arresting visuals-including gravity-defying acrobatics and operatic death scenes-the joy of Sacrifice rests in watching actors Wang Xueqi (star of CHEN’S YELLOW EARTH), a Chinese Tommy Lee Jones, and the deceptively meek-looking Ge You (Best Actor at Cannes for his work in Zhang Yimou’s TO LIVE) deceive each other with half-truths and brinkmanship as only such deft old-hands can. In this way, timeless themes of fatherhood, loyalty and, of course, sacrifice play out against the backdrop of a thrilling, nonstop period spectacle.