VIZ Cinema and NEW PEOPLE, in association with dGenerate Films, are proud to present a fascinating series focusing on a new vanguard of Chinese independent filmmakers. 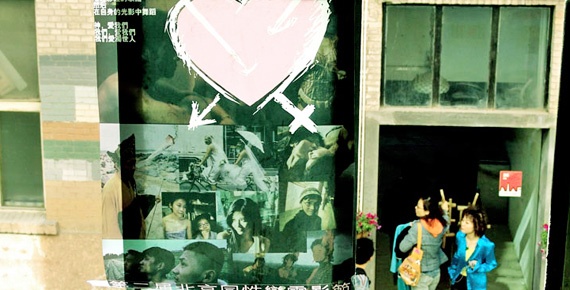 VIZ Cinema and NEW PEOPLE, in association with dGenerate Films, are proud to present a fascinating series focusing on a new vanguard of Chinese independent filmmakers, whose innovative uses of digital filmmaking deliver provocative insights into the world’s largest nation.

All of the documentary films to be shown at the festival were made outside the official Chinese film system – unauthorized, uncensored, and totally independent. These groundbreaking films introduce a new generation of filmmakers who represent the future of Chinese cinema, using new technology to present a vision of China as never seen before. A wide variety of controversial topics and issues like homosexuality, the role of women in society, the forced relocation of citizens which preceded the 2008 Beijing Olympics, drug use, and the inner workings of Chinese law enforcement, are examined in unflinching detail in these seven films.

China Underground opens Friday December 3rd with the premiere of Queer China, “Comrade” China at 7:00pm. The screening will include a Q&A session with several guest speakers and an after-party that will immediately follow. The remaining films will be screened throughout the weekend.

“We are thrilled to showcase seven of our titles at VIZ Cinema in China Underground, the first film series of its kind,” says Karin Chien, president of dGenerate Films. “Independent documentaries are the only free media existing in mainland China today. There is a new generation of filmmakers, artists, and activists wielding digital cameras and laptop edit systems, creating some of the most daring cinema in the world today. These films will have a special relevance and resonance with the diverse communities of the Bay Area.”

Queer China, ‘Comrade’ China | Directed by Cui Zi’en
Friday, 12/3 at 7:00pm
China, 2008, 60min, Mandarin with English subtitles
China’s most prolific queer filmmaker presents a comprehensive historical account of the queer movement in modern China. Unlike any before, this film explores the historical milestones and ongoing advocacy efforts of the Chinese LGBT community. Tickets are $15.00.

Meishi Street | Directed by Ou Ning
Saturday, 12/4 at 2:45pm
China, 2006, Documentary, 85min, Mandarin with English subtitles
MEISHI STREET shows ordinary citizens taking a stand against the planned destruction of their homes for the 2008 Beijing Olympics. Acclaimed at over two dozen museums and galleries around the world, Meishi Street, by renowned visual artist Ou Ning, works as both art and activism, calling worldwide attention to lives being demolished in the name of progress. Tickets are $10.00.

Using | Directed by Zhou Hao
Saturday, 12/4 at 4:45pm
China, 2008, Documentary, 105min, Mandarin with English subtitles
A twisted relationship develops between an urban Chinese couple struggling with heroin and a filmmaker chronicling their addiction, in this provocative documentary on drug abuse, filmmaking and friendship. Zhou’s unflinching depiction of his friends’ repeated attempts to quit blurs the line between filmmaker and subject, and raises provocative questions about the ways in which each uses the other. Tickets are $10.00.

Ghost Town | Directed by Zhao Dayong
Saturday, 12/4 at 7:15pm
China, 2008, Documentary, 169min, Mandarin, Nu, & Lisu dialects with English subtitles
Zhiziluo is a town barely clinging to life. Tucked away in a rugged corner of Southwest China, the village is haunted by traces of China’s cultural past while its residents piece together a day-by-day existence. Tickets are $10.00.

1428 | Directed by Du Haibin
Sunday, 12/5 at 1:00pm
China, 2009, Documentary, 117min. Mandarin and Sichuan dialects w/ English subtitles
Du Haibin’s award-winning documentary of the earthquake that devastated China’s Sichuan province in 2008 explores how victims, citizens and government respond to a national tragedy. Du depicts a world in chaos, both material and moral. “Without judgment but with a deep compassion for their subjects, the filmmakers of 1428 bring us a myriad of individual stories of absurdity, confusion and grief.”(Cherise Fong, CNN). Tickets are $10.00.

Crime and Punishment | Directed by Zhao Liang
Sunday, 12/5 at 3:30pm
China, 2007, Documentary, 122min, Mandarin with English subtitles
“Zhao’s artistry is instantly apparent.” (Robert Koehler, Variety)
A prime example of how independent documentaries are on the vanguard of Chinese cinema, Crime and Punishment is an unprecedented look at the everyday workings of law enforcement in the world’s largest authoritarian society. With penetrating camerawork, Zhao Liang (Petition, 2009 Cannes Film Festival) patiently reveals the methods police use to interrogate and coerce suspects to confess crimes – and the consequences when such techniques backfire. Tickets are $10.00.

Before the Flood | Directed by Li Yifan and Yan Yu
Sunday, 12/5 at 5:45pm
China, 2005, Documentary, 147min. Mandarin and Sichuan dialects with English subtitles
A landmark documentary following the residents of the historic city of Fengjie as they clash with officials forcing them to evacuate their homes to make way for the world’s largest dam. Shot over two years, Before the Flood is a breathtaking achievement in verité-style documentary filmmaking. This profound film shows the human effects of one of history’s grandest social engineering projects, reflecting on the loss of both home and heritage. Tickets are $10.00.

* Win a pair of tickets to any film screening at China Underground.*
Find out how by becoming a fan of CAAM on Facebook or following us on Twitter.