The Diversity Video Competition provides a space to engage in an artistic dialogue on civil rights issues, stereotypes, and myths surrounding minority groups with a particular anchor in the Sikh experience. 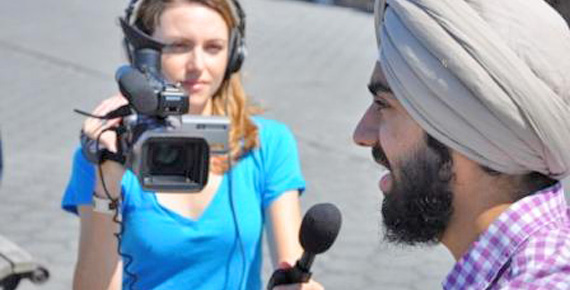 Are you a filmmaker? Do you care about diversity issues? If so, join the Sikh Coalition’s Diversity Video Competition, and you could have a chance to win $1,000, a free roundtrip ticket to New York City, and 2 passes to the Sikh Art and Film Festival. Your film will also be premiered at this popular New York film festival in October.

The purpose of the Competition is to provide a space to engage in an artistic dialogue on civil rights issues, stereotypes, and myths surrounding minority groups with a particular anchor in the Sikh experience. It is through this dialogue that we hope to dissolve ignorance and spread awareness of discriminated minorities.

Topic: Today in the United States, especially since the events of 9/11, the turban has been often associated with terrorist groups, including Osama Bin Laden, the Taliban, and others. However, the vast majority of people who wear turbans in the US are not terrorists, but Sikhs – and their appearance, although similar, often marks them for discrimination. Because of this appearance, Sikhs, as well as many minority groups in America have had to struggle to impart the message: you can’t judge a book by its cover.

Referencing Sikh American and other minority experiences, please create a 5 minute video (or less) that explores the statement, “You can’t judge a book by its cover.”
All entries must be received by September 15, 2010. No film experience is required to participate, and people of all ages are encouraged to submit.

To Apply: Please visit www.sikhcoalition.org/ to learn more.
There you will find instructions, an application form, judging criteria, rules, and submission
guidelines. You will also be able to read more about the 2 judging phases:

1) All videos will be reviewed by an expert judges’ panel and narrowed down to the top two.
2) Then, the 1st place winner will be determined by a popular vote.