SFIAAFF intern Donna Foronda heads out to this year's Frameline Film Festival screening of SEX IN AN EPIDEMIC. 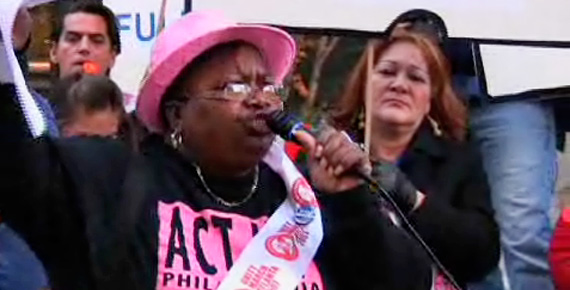 In honor of Pride Month, and to support our neighbors across the hall (CAAM and Frameline share a floor), I decided to hop on the F line down to Castro for Frameline’s LGBT Film Festival.

Greeted by a nearly packed theatre I found myself seated during the screening of SEX IN A EPIDEMIC, a documentary by Jean Carlomusto. Starting from the early 80s to modern day, this film crafts together interviews and footage to give us the shocking facts of the AIDS epidemic. Focusing on the lack of sex education in means of funding and acceptance, the documentary shows the highly political disease in which society’s discrimination led to unnecessary deaths in the millions.

Because AIDS has stirred up many political and social revolutions strong enough to change our society, it’s not surprising that the disease in no stranger to the documentary field. With such a powerful topic it becomes necessary to educate the masses of the history so that we know where we stand and so we do not repeat old mistakes. I was pleased to see how thoroughly Carlomusto created the foundation of the piece, chronologically walking us through this history so that we fully understand the subject at hand.

After the documentary, I decided to stay for a few minutes to listen through the director’s Q&A. Of the interesting topics that came from the audience one caught my attention the most: A man brought his feelings of being “burnt out” from all the AIDS information that has been given to him through his time. This idea got me thinking, after having studied the AIDS epidemic at school and seeing a handful of documentaries myself, I began to understand his legitimate point. Yes, the information and foundation in this documentary was strong (and of course necessary for those who hadn’t known), but where do we go from here? Reflecting on the piece I found that Carlomusto had addressed this topic right before the end credits rolled. The film leaves us on an open ended note by showing us the current stage of the epidemic and how it is still an important discussion. Though the documentary was on the history of AIDS, regarding it as only such will continue to make it a problem in our present. AIDS is not just that “terrible thing that happened in the 80s” but a current issue today. As Carlomusto nicely summarized, this piece was meant to “inspire and get people talking.” Now that we have the foundational tools from SEX IN AN EPIDEMIC it is our turn to continue to educate and to continue to do something about it.

Donna Foronda is an intern at SFIAAFF and student at Chapman University where she studies Screenwriting, Photography, and LGBT Studies.