Beautiful memories stand out from a perfect weekend full of memorable films, friends, and events. 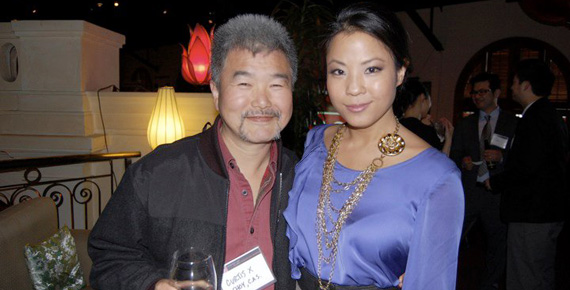 Beautiful memories stand out from a perfect weekend full of memorable films, friends, and events. On Saturday, I ran into CAAM’s Student Delegates at the Kabuki, and listened as they discussed film. Vinky talked about how the films she watched were special because they were about a search for self. The energy and enthusiasm of all the delegates was heartwarming. There was something – knowledge, spirit – being transferred between generations and individuals from different walks of life, through the medium of film. Last night, we celebrated the organization that makes such exchanges possible at CAAM’s 30th Anniversary Gala. The Asian Chefs Association created an amazing spread of delectables at Ana Mandara and we mingled, munched, and commemorated CAAM as well as Loni Ding, the pioneer co-founder of CAAM who recently passed away. Deann Borshay Liem told me that “CAAM was my film school”, and I was an eyewitness to Tamlyn Tomita’s perfection – or at least her perfect score (10 for 10!) on FILIPINO OR NOT? She didn’t even get the question about herself. Tamlyn and Roger Fan were the wild and crazy emcees of the evening. You can see more pictures of the event here.

I did get to joke with Karin Anna Cheung about the raucous Q and A following her delightful film THE PEOPLE I’VE SLEPT WITH, directed by Quentin Lee. Someone in the balcony basically hit on her, asked about her relationship status and asked to have a drink with her! Ahh, the disinhibiting powers of film and beautiful women. Turns out the guy was an acquaintance pulling a prank – so don’t get any ideas.

There were several other incredible Q and A’s. CLASSIC FILIPINO AMERICAN SHORTSbrought back directors and actors from 20 years of amazing films. John Castro, Celine Parrenas Shimizu, Keo, The Mail Order Brides, Michael Magnaye and Patricio Ginelso truly lit up the Viz theater. I could actually feel the depth, talent and pure warmth emanating from the stage. It was an honor to see these wonderful people and their work. CAAM, you have my vote for a regular “Best of” shorts program. Chi-hui Yang made a bid to become a talk-show host after he leaves CAAM as he interviewed Aasif Mandvi on Saturday, and Freida Mock on Sunday. Mock, in true documentarian form, tried to turn the tables on him and interview him about his future plans, but Chi-hui yielded no ground. He was as smooth as usual, erudite and accessible. Charlie Rose, look out! And I was right about Aasif – he did bust my gut for 90 minutes.

Laughter was prevalent, but so were tears – A VILLAGE CALLED VERSAILLES and MOUNTAIN THIEF moved us all, as did IN THE MATTER OF CHA JUNG HEE and WO AI NI MOMMY. (Note: If you missed these last two, they will be airing on POV this August and September.) PRINCE OF TEARS was a beautifully filmed look at the anti-communist “White Terror” days in Taiwan of the early 1950s. LT. WATADA was important material for American history and the anti-war movement. These films, and so many others, remind us that CAAM is about “finding yourself”, as Vinky said, and also discovering the world. In the most moving films, we watch personal dramas played out against a backdrop of historical change. We vividly see how grand decisions by the supposedly mighty impact individual lives. The director’s lens pulls us deep into other lives and other perspectives, and we are transformed in the process. If we could only open ourselves to other’s viewpoints the way we yield in the theater…

Happy Birthday, CAAM! Young, middling, and older – Asian Americans and Aging Americans – we salute you. Even your wrinkles are adorable.

NOTE: WO AI NI MOMMY and IN THE MATTER OF CHA JUNG HEE, as well as CLASSIC FILIPINO AMERICAN SHORTS and THE PEOPLE I’VE SLEPT WITH are playing again this week and weekend at the festival.

Ravi Chandra is a psychiatrist and writer in San Francisco. He is happy to be included in the new, groundbreaking South Asian American poetry anthology, INDIVISIBLE, edited by Neelanjana Banerjee, Summi Kaipa and Pireeni Sundaralingam (University of Arkansas Press, April 2010)