Why is this man in a gorilla costume? And where can you get a banana suit? I caught up with David Boyle, the director of White on Rice, to answer these and other deep questions about his new hilarious feature premiering at the 2009 SFIAAFF. 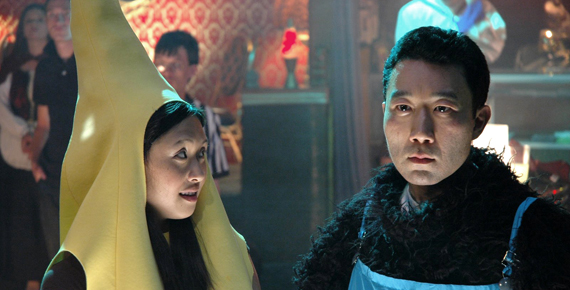 Jimmy is not enticed by his banana-clad admirer.

Why is this man in a gorilla costume? And where can you get a banana suit? I caught up with David Boyle, the director of White on Rice, to answer these and other deep questions about his new hilarious feature premiering at the 2009 SFIAAFF.

WHITE ON RICE | USA 2009 | Dir. David Boyle
This interview was conducted via iChat … it is partially edited for bad grammar and confusing overlapping iChat banter.

Christine Kwon: Thanks for joining me for this exclusive iChat interview.

David Boyle: Thanks for having me.

So, before a proper introduction and such, let’s just get it out of the way:
where can I, or any layperson for that matter, obtain a banana suit?

That was sort of serendipitous (sp?)

Haha, I think that’s right. So White on Rice, which is our San Jose Opening Night Film is your second feature film, is that correct?

Yes, my first was “Big Dreams Little Tokyo” which is, ironically, set in San Jose, so I have many fond memories of the place.

That’s right. It is set in Japantown although mostly shot in Salt Lake City… we shot for a couple days in San Jose to complete the illusion

Oh I see… So do you mind giving me a brief description of how you got into filmmaking? In fact, let’s say, in 10 words or less describe why you became a filmmaker

Well…I’ve always liked storytelling, and always loved movies, so I guess it was just a natural choice. Couldn’t think of anything better to do I suppose.

That was more than 10 words.

(My second try was a little shorter)

I’ll give you props for that. So I wanted to talk a little bit about the writing of the film, b/c as you say, you do like telling crazy stories…by the way, does anyone ever mistake you for Danny Boyle?

Ha ha ha, I’m not related. No. I am related to Danny Boyle the Las Vegas boat dealer…

Yes I did. It is a hard movie not to like. Danny Boyle’s got some chops, that’s for sure.

Cool… so back to the topic. The film is really hilarious

It’s truly an offbeat comedy, and I mean it’s very creative. I couldn’t have come up with the storyline unless it happened to me in real life.

Well. That’s my secret right there

Nooo really? What were your inspirations? How did you come up with such a bizarre character? Ok, let me say idiosyncratic, not bizarre.

When I’m writing, I think I’m being really creative and just making all that stuff up. But in reality many of the characters are based on my family. Jimmy is…how should I put this… he is what I fear I will be at 40, what I am working NOT to become

Hahaha… well I’m pretty sure you won’t end up like Jimmy.

I hope not. I guess I am fascinated by people who are unable to hide who they are and what they are thinking. And that’s what defines Jimmy

Oh right. I do know some folks like that… So you must have a pretty fun family then.

Well, I don’t have a “wacky” family like the Hamajimas per se, but we definitely all have our quirks. My sister is a wedding florist (just like the sister in the movie) and I lived in her basement for a while, so that was kind of inspired by real life

But the storyline is also very clever and unique. What was the process like for you and the other writer, Joel Clark?

Well, I wrote a number of drafts of the screenplay over a long period of time and Mike Lerman, one of the producers, introduced me to Joel in New York. Joel used to be in the comedy troupe “Olde English,” and I had him write the next few drafts after that. He has a real knack for dialogue, and giving each character their own voice. But we only ever met once, and worked over the phone and email ever since.

Cool. Were you ever in a comedy troupe?

I was in high school. I used to do some sketch comedy, and stuff like that

I thought the details in the dialogue and the performance & timing by Hiroshi really made the film delightful to watch. What was it like directing him and trying to make the script a reality?

Hiroshi has his own process, and I kinda left him alone alot of the time. He went off with the script and filled up a couple notebooks with notes on his character. He also carried around dinosaur toys everywhere and drank a lot of red bull.

Ooh does he do that regularly or was he getting into character?

Ha ha, I’m not sure. By the end of the shoot, the lines were starting to get blurred. He believes that red bull is a sort of cure-all for everything. I think it gave him the energy to keep up the ridiculous character.

Yes, it’s a cure for sanity and sleeping.

We had a cooler on set of red bull just for him. Ha!

Yikes. So you and Hiroshi, and a talented cast and crew (including Lynn Chen and James Kyson Lee)…

How did this group of folks come together?

Well, I knew James already from “big dreams” and he was excited about the part and he actually put me in touch with Lynn

Nope, she doesn’t… one of the great things about the movie. I kept thinking something was going to happen

Other people who read for the part kind of flirted with him (and it could go that way), but I thought it was funny how she was just ice cold, and yet Jimmy just keeps on forging ahead

But in reality she had no interest in him whatsoever.

Hahaha. I def appreciated that it wasn’t predictable

James also introduced me to Joy Osmanski, who really brought a lot to the movie as well

So you could say that James was one of your “Heroes.”

K… no need to respond to that… I take it back!

The whole cast was amazing. It was an ambitious project for the size (207 scenes, many many locations, etc)

Wow, how long was the whole thing… ok, let’s say how many days shooting?

What were some of the craziest locations?

Well, we shot in the Salt Lake City library, which was a lot of fun but as always, you work with huge time restrictions in those situations

BUT the craziest location was actually our little studio where we built sets. All of the bedrooms were constructed on a stage

Oh really? This is the magic of cinema that always freaks me out…

It was sort of a last minute decision, and the art department had 2 days to fully build and decorate them

Good for them! That reminds me, how was the stabbing scene? Or rather, the fall on knife scene?

Well, that wasn’t as hard as I thought it would be. The challenge was rolling with restrictions put on me by the location

Any one thing in particular that made you use some creative alternatives?

Originally, Jimmy floods the whole house, but that just wasn’t practical, so we came up with the smoke thing. I just felt bad for Mio who had to fall down 10-15 times

Jeese…yeah, I thought the smoke thing worked well… I also feel bad for him now. Mio that is. That looked like a hard floor.

There were a few things like that throughout the movie. Originally the funeral home scene took place in a mall, but last minute complications had us changing it to a funeral home

Well, he had a mattress to fall on. But still…

He really sells it

So from my Google search, I read that you actually learned Japanese while on a missions trip in Australia?? How was that?

It was really cool. It was sort of a sink-or-swim type of situation.

I mean, we live in such a global world now that you don’t really have to go anywhere to learn a foreign language fluently. Well, I got there and immediately had to start speaking Japanese. And eventually do stuff like simeoutaneous translation, etc… but I had a great time, and I love Australia

Cool… I heard koalas smell really bad, not sure if its true…. So when you’re not making films, what do you like to do? Do you watch Lost or The Bachelor parchance?

Ha! Haven’t watched either yet

I work as an editor and post-supervisor so that’s a lot of what I do in between projects (or even during). I love watching movies, I love to read

What was the last book/movie you watched?

The last book I read was “Schulz and Peanuts” about Charles Schulz the cartoonist. And the last movie I watched was “the midnight meat train,” which was awesome, of course

Well, I think this (White on Rice) is one of the funniest films, Asian or otherwise, that I’ve seen recently. I anticipate the audience at SFIAAFF will be rolling around in their seats

Do you have a “dream” audience? If so, who would be in it, and how would they react to your film?

My dream audience would be Siskel and Ebert

Yikes… those are intimidating thumbs.

Well the film is certainly a great achievement in comedy and filmmaking. As a director, do you have any advice to give to aspiring: standup comedians, filmmakers, English speakers who find it difficult to learn a second language as an adult?

Ha ha. Well, with new technology you can make a movie for free now, so you might as well do it if that’s what you want to do. And as for learning a second language, just…. be a good mimic. Fake it till you got it.

Thanks so much David!

I’ll let you have the last word…

I’ll see you next week!

To hear more from director David Boyle, join us for the SFIAAFF screenings of White on Rice, playing on Tuesday, March 17, 6:45 at Kabuki Cinemas, in San Francisco; and Friday, March 20, 7pm at Camera Cinemas, in San Jose.