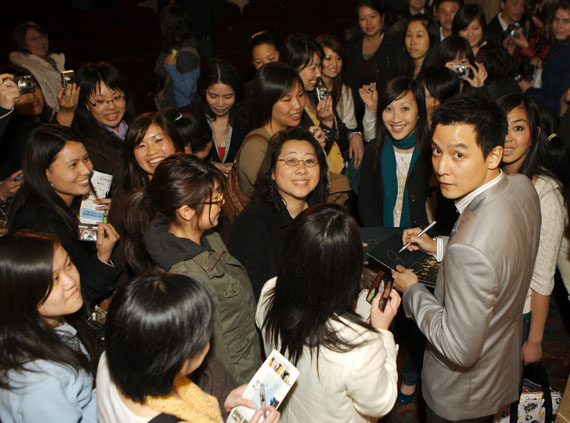 The San Francisco International Asian American Film Festival (March 13 – 23, 2008), presented by the Center for Asian American Media, wrapped with an estimated attendance of 30,000, including over 225 filmmakers, actors and industry guests. 57 of 113 shows—more than half—sold out in a program that featured eight world premieres, three North American premieres and four U.S. premieres.

Highlights
The Festival opened with Wayne Wang’s A Thousand Years of Good Prayers—his first Asian American film in 15 years—and closed with the Australian drama The Home Song Stories, featuring an award-winning performance by Joan Chen. In between, highlights included a sold-out Castro screening of Michael Kang’s Centerpiece Presentation film, West 32nd, and a Special Presentation screening of Harold & Kumar Escape From Guantanamo Bay, which proved so popular that desperate fans were offering $60 and more per ticket. Both screenings were attended by actor John Cho.

A Spotlight on Wayne Wang offered screenings of the Opening Night film A Thousand Years of Good Prayers and its companion film The Princess of Nebraska, the ever-popular The Joy Luck Club (which reunited Wang, author Amy Tan, producer Janet Yang and actors Ming Wen and Lauren Tom) and a new cut of Life is Cheap… But Toilet Paper is Expensive. Wang also spoke about his cinematic influences in an insightful conversation with New York Times film critic Dennis Lim. A tribute to the late Taiwanese filmmaker Edward Yang featured screenings of Yi Yi, The Terrorizer, and the rarely screened four-hour masterpiece A Brighter Summer Day.

In addition, over 50 delegates representing 15 Asian American film festivals from various U.S. and Canadian cities attended and participated in the annual Festival Programmer’s Meeting. Many filmmakers who were guests at previous festivals returned to partake in the festivities, creating a strong sense of community around Asian American cinema. “In many ways, the Festival has become the annual starting point and gathering spot for Asian American filmmaking,” said Festival Director Chi-hui Yang. “It is exciting to see the cinema grow, and gratifying to have this reflected in the Festival’s films and attendees.”

Back to Japantown
After one year away from Japantown due to renovations at the Sundance Kabuki Cinemas, the Festival returned to the neighborhood the event had called home for 17 years. The majority of screenings were once again held at the Sundance Kabuki Cinemas, while the Landmark Clay Theatre—just six blocks away from the Kabuki—was added as a new venue. To celebrate its return to Japantown, the Festival presented “Festival Forum” at the Japantown Peace Plaza on March 15, a day of various activities that included taiko drummers, bands and breakdancers performing live on a stage, as well as booths with interactive experiences offered on computers. The day culminated in a free outdoor screening of Hayao Miyazaki’s 1978 anime classic The Castle of Cagliostro, attended by over 100 people. “We wanted to offer a festive environment that allowed attendees to interact and to congregate outside of the theaters,” said Festival Assistant Director Taro Goto. “We’ve always felt that the Japantown Peace Plaza was a perfect venue for something like this. I think we also reached many people for the first time due to the high visibility of an outdoor event.”

Award Winners Announced
The winners of the jury awards were announced on March 20 before the Closing Night screening. The competition films represent the best in Asian American and Canadian cinema. The winner of the Best Narrative Feature Award in the Narrative Competition section was Amal, directed by Richie Mehta. The Special Jury Award was a tie between John Kwon’s Always Be Boyz and Ron Morales’ Santa Mesa. The jury was comprised of playwright/filmmaker Philip Kan Gotanda (Life Tastes Good), producer Gina Kwon (Me, You and Everyone We Know) and screenwriter Iris Yamashita (Letters From Iwo Jima).

The winner of the Best Documentary Feature Award in the Documentary Competition Section was Planet B-Boy, directed by Benson Lee. The Special Jury Award was given to Wings of Defeat, directed by Risa Morimoto. The jury was comprised of Kathryn Lo (Associate Director of Program Development and Independent Film at PBS), filmmaker Stanley Nelson (Jonestown: The Life and Death of the People’s Temple) and scholar/filmmaker Celine Parreñas Shimizu (Super Flip).